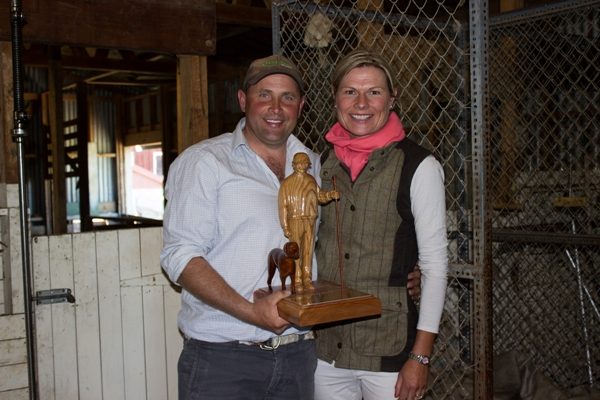 Lucerne is the critical element in getting a Marlborough couple’s breeding stock through the summer dry. Sandra Taylor reports. Pictures by Tom Harvey.

Richard and Victoria Gorman’s success in this year’s Westpac and Bayleys Marlborough Sheep and Beef Farmer of the Year competition comes down to one simple factor – feed.

It is their ability to feed stock consistently well throughout the year that allows them to realise the genetic potential of their Landmark composite ewes. This drives productivity and profitability and ensures their business is generating a strong financial performance year-on-year.

With a gross farm income of $909/ha (three-year weighted average), farm working expenses of $434/ha and earnings before interest, tax and rent of $475/ha, their business is generating a 6.1% return on capital and this largely comes to down to their ability to grow and utilise feed.

The Gormans farm Dumgree, a 770-hectare hill country farm near Blenheim. With an annual rainfall of about 700mm, their farm system has been set up to grow and sell lambs as quickly as possible so they can look after their capital breeding stock through the summer dry period.

‘We need to have lambs that grow really fast and we can only do that with a good-size ewe.’

Lucerne is a critical part of their operation and a 160ha platform of the forage is what drives their business. Coupled with the subterranean clover endemic in their hill country pastures, these legumes drive lactation and pre-weaning growth rates averaging 315g/day.

“The lucerne platform on our better country was what gave us a nudge ahead in this competition,” Richard says.

This lucerne, along with winter brassica and Italian ryegrass crops, ensures their capital stock are fed to maximise performance all year round and summer brassicas are used for growing out ewe lambs.

The Gormans’ ewes are large-going to the ram weighing around 76kg – but Richard says they need to run large ewes to get the large, fast-growing lambs they require in their summer-dry environment.

“We need to have lambs that grow really fast and we can only do that with a good-size ewe,” Richard says.

These mixed-age ewes are lambing between 145-150% and Richard believes they have the potential to be consistently lambing as much as 160%.

Richard and Victoria sell 72% of their lambs finished straight off their mothers. They begin skim-drafting their lambs in November to a minimum of 38kg liveweight and all lambs are weaned by December 15. At this stage the drafting weight is reduced to 34kg liveweight.

Depending on the season and feed availability, remaining lambs are either sold store or finished on lucerne or summer brassica – but the couple will not compromise the performance of their capital breeding stock by struggling to finish all of their lambs in a dry season.

“They are big ewes that are milking well and having lots of lambs – and they are efficient.”

Hoggets are a class of stock Richard takes particular pride in. Their 900 replacement ewe lambs are the highest-priority stock class on the farm over summer, as they strive to get them as heavy as possible going into mating.

This average mating weight has increased incrementally over the years and this year the ewe lambs went to the ram weighing 54kg.

The couple monitor the hoggets throughout winter to ensure they are continuing to grow. This year they scanned 146% with 13% dry (these were sold) and lambed 107%. Richard and Victoria would like to see them consistently lambing 120%.

Conscious of maintaining their performance as two-tooths, the couple feed them as well as possible over summer.

“We need to keep looking after them and focus on them going back to the ram at a good, even body condition.”

This year, the two-tooths went to the ram weighing 74kg.

The couple retain a high number of ewe lambs as they aim to speed up the genetic progress of their flock and will retain 300 ewe lambs from the hoggets as replacements. They will be looking to reduce the number of replacements retained in the near future.

Richard, who was part of Beef+Lamb New Zealand’s North Canterbury Sheep Profit Partnership programme, says one of the most important management strategies he learnt through the programme was the importance of having good forage covers to lamb on.

“Set-stocking on good covers will give us good lamb survival and then high lamb growth rates through to drafting.”

Richard defines good covers as 1600kg drymatter (DM)/ha – or a minimum of 150mm for lucerne – and it is critical that mixed-age ewes are set-stocked lightly – at just three to four mixed-age ewes/ha – so covers won’t be mined over that lambing period.

If plant growth rates are slow in that early spring period, the Gormans will use nitrogen to boost covers and in a particularly growthy year they will set-stock the ewes earlier, up to 10 days before lambing.

The Gormans make every effort to keep the ewes at an even Body Condition Score of 3-3.5 throughout the year.

In early January they go through and take all the lower condition score ewes and will give them priority feed. This ensures all the ewes are going to the ram at a minimum BCS of 3 on March 10.

Richard says a lot of thought goes into preparing the ewes for mating.

The ewes are body condition scored again at scanning and heading into lambing, Richard feeds the ewes as well as possible. The couple grow winter brassica and Italian ryegrass for wintering ewes. These crops allow the lucerne to be spelled over winter and most importantly, allow covers to be built for that critical lambing period.

The Gormans lease 250ha of vineyards in winter and this provides them with an opportunity to finish trading lambs over winter and graze ewes- again taking pressure off the rest of the farm.

Cattle play a minor role in the Gormans’ business, although they are used for managing pasture quality, particularly on their hill country. They run 87 Angus and Simmental cows and while the calves are typically sold at weaning, this is a flexible policy as when there are feed surpluses they will look to carrying them through for finishing.

In winter they may also finish 20-50 trading cattle on pasture – cattle do not graze the lucerne.

Large areas of lucerne have been established in the past seven years, but it has been the key to the success of the Gormans’ business.

While they have 160ha in the forage, they aim to have 200ha within the next two years.

Richard is fastidious about its grazing and weed management and believes by looking after it, they will get between six and 12 years out of each stand. This means that apart from a few weeks over lambing, the stands are rotationally grazed and then grazed very hard before being spelled over the winter months.

To ensure the ewes and lambs are getting enough fibre in their diet, the couple leave areas of the lucerne paddocks in unimproved pasture.

Having established an efficient lucerne system, Richard and Victoria are turning their attention to developing their hill country. They say their key limitations are fencing and fertility so by focusing on sub-division, fertiliser and water they will be better able to manage and utilise the subterranean clover that exists in their pastures.

Once this in place, they may look at lifting ewe numbers or have the confidence to consistently finish all of their lambs within their operation.

The couple have articulated their vision for their business with a strategic business plan and are striving to have a high-producing profitable farm that has high quality infrastructure which looks great and works well.

“We aim to reduce weed levels on the farm and have a simple system that can handle climatic and management variation.”

They say their business must be financially and environmentally sustainable.

“Based around composite sheep and Angus cattle, we strive to have high-performing capital stock.”

The couple are striving to increase production and profit while maintaining a good work/life balance and protecting and enhancing their environment.

They have clear farm business goals which include increasing the area in lucerne to 200ha, getting a 160% lambing from their mixed-age ewes while maintaining lamb growth rates of 300g/day and increasing the volume of sheep meat sold to 130 tonnes (93t was sold in 2013). These would drive financial performance to their target EBITRs of $200,000 by 2017 and $300,000 by 2022.