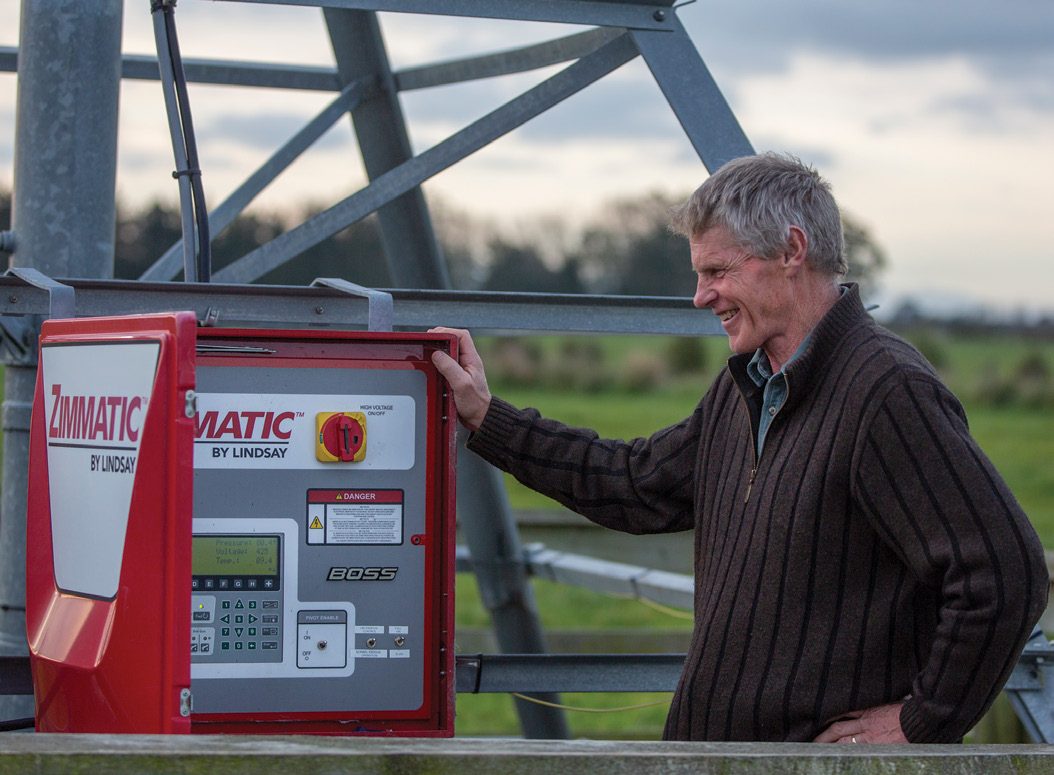 Grain and fodder beet are tactically used on the Everest family farm to help achieve profit, production and environmental goals. Anne Lee took a look at how they do it and reports back on some of the analysis.

There’s always a whole lot of learning going on at the Everests’ 226 effective ha Flemington Farm, a few kilometres south east of Ashburton.

It’s where science is applied, where it’s put through its paces by a family ever eager to be truly sustainable for people, animals, environment and profit. 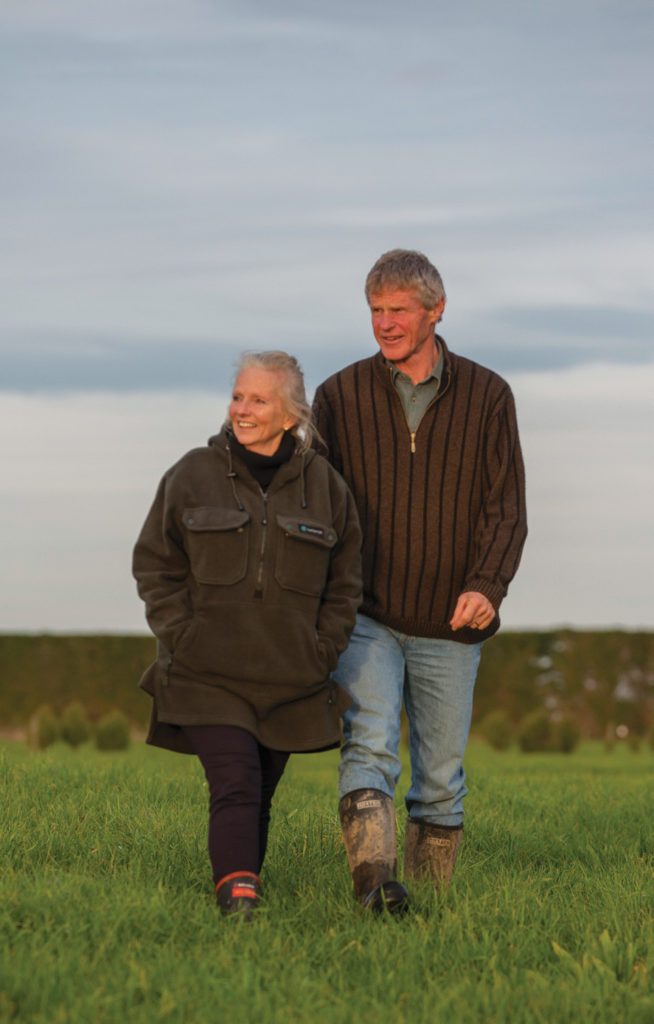 It’s also a place where they’re happy to share the outcomes – what worked, what didn’t quite hit the mark but more importantly in both cases the why.

Phill and Jos Everest converted their Canterbury farm, now managed by their son Paul, just over 10 years ago.

It’s atypical of most conversions because of the farm’s heavier soils which make it less at risk from nitrate leaching.

Phill’s well known in the region and amongst his peers as a successful farm consultant and both he and Jos relish the opportunity the farm affords for applying well researched practices and then analysing the outcomes.

While Flemington doesn’t have a typically “leaky” soil, local regional council plans still require nitrogen (N) loss reductions of 36% from baseline losses (the average annual nitrogen loss from 2009-201) by 2035, 25% reductions by 2030 and 15% by 2025. To date, they’ve achieved a 24% drop mainly through improved irrigation management and lower nitrogen fertiliser application but the supplements they use are also having an influence.

“Fodder beet has become a really important autumn feed for us on the platform for a few reasons.

“It means we start transitioning cows here over autumn when it’s dry and we have more time,” he says.

However, he cautions that although it’s easier, it’s still imperative to follow the rules to an exacting standard so cows are safely managed up to 5kg DM/cow/day by the end of May when they go to winter grazing and move up to ad lib allocations.

They start feeding out fodder beet in April, feeding 1kg DM/cow on the first day going up 1kg/cow every second day.

During the early transition stages two people are involved with half the cows coming onto a measured area of crop on the first day for 10 minutes before they’re walked off quietly using a wire held by two people.

The second half of the herd then gets the same treatment after they have been milked.

The allocation and time is then carefully increased over coming days.

The face is 600-800m long which makes allocation simple as daily intakes are increased.

The fodder beet is used to lengthen the round through autumn instead of silage or grain.

Bought in supplement is relatively low at 250- 270kg/cow of wheat.

It’s fed in the farm dairy mostly during the spring and in late autumn to lengthen the grazing round.

The heavier soils mean feeding out silage is a no go during the shoulders of the season and grain, readily available in Canterbury can be fed with high utilisation and low wastage.

A feed budget is set before the start of the season with a plan clearly set out so there’s no creep in grain use.

Pasture comes a definite first and supplement is only used as a way to manage round length, Jos says.

“It’s a tool to manage pasture not to push production,” she says.

This mating though, they are going to continue feeding supplement through the mating period where normally they would dial it back as pasture takes off.

“It’s a bit of an experiment but we’re going to see if it has an effect on mating results,” Phill says.

They’ve tightened up the mating period over the five-years too which will account for some of the increase.

“Getting replacement rates down to 20% is a tactic for lowering greenhouse gas emissions (GHG) so we have to do a lot better if we’re going to have any room for selective culling.”

Most of the milking platform is watered by centre pivots with 50% fitted with variable rate irrigation (VIR) technology.

Phill says they’ve managed soil moisture a lot more actively and maintained it at a lower level than previously because of the good water holding capacity indicated by its high profile available water (PAW) which is 135mm.

Effluent is injected into the irrigators after it’s been through a weeping wall, recycled through the yard as green wash and back through the weeping wall to a 50-day storage pond.

The VRI allows a programme to be set so that nozzles switch off near the drains, over troughs or lanes or over a triangular area in from gateways.

Effluent can be applied at low application rates of 1mm through the pivots which equates to 5kgN/ha.

Phill says the effluent pond is kept low through the summer and autumn but it’s not emptied prior to winter because that’s when nutrient losses can occur thanks to higher rainfall.

“We’re getting it right down through the spring when plants are growing rapidly and can better use the nutrients.”

Nitrogen fertiliser use has been dramatically cut over recent years with a big drop last season that wasn’t completely successful. 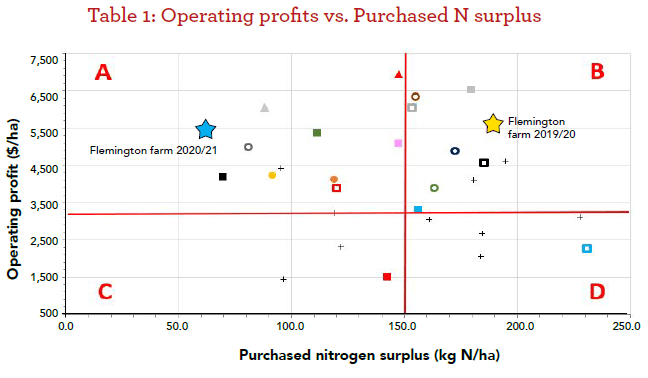 They set up a nitrogen fertiliser plan which dropped use from 270kg N/ha the previous season to 168kg N/ha although it had another 20kg/ha available for use if it looked like it would be needed.

“We didn’t use it and we should have because we ended up getting short of grass and that cost us in extra supplement and less milk production.

“It was a net loss of $45,000 all up in extra cost and less milk but we can’t say that was all down to lower nitrogen because we did have some issues with irrigation too during the summer – but realistically nitrogen was a factor,” he says.

The plan uses sulphate of ammonia as the first application in spring followed by urea and then urea coated with a urease inhibitor through the summer to reduce volatilisation losses.

Their purchased N surplus has dropped significantly from 185kg N/ha to 78kg N/ha with the reductions in fertiliser N use given supplement levels haven’t been increased to compensate.

They’ve been sowing clover and plantain into paddocks when they’re renewed and have been quite successfully adding plants to the sward by including seed of both in spring capital fertiliser dressings.

“It’s pretty simple to do that and we are getting some success at 1kg/ha of seed for plantain and 1-2kg/ha for clover but we’re not getting plantain levels back up to 30%.”

The farm is already run at a relatively low stocking rate for Canterbury with cows producing about 510kg milksolids (MS)/cow from relatively low bought-in feed but the couple says striving to increase efficiency through breeding is ongoing. Breeding practices are also being employed that could help lower GHG emissions with sexed semen used over the top 30% of the herd.

The aim is to increase the likelihood of getting replacements from top cows, speeding up the rate of genetic gain to improve the herd’s overall performance faster.

Over the years the couple have planted more than 16,000 plants along fencelines and drainways in an effort to improve water quality and increase biodiversity.

“All of these things are ongoing – there’s always work to do and new science coming our way.

“The thing is to keep going – be open to new practices and science and really you’ve got to be a bit courageous to get on and make changes where you can.

“We can make a difference with the practices and technologies we have now but we have to be upfront with what doesn’t work and what it costs.

“That said though I’m really optimistic from what I’ve seen going on that there are new technologies coming too that are going to help towards meeting many of those environmental targets.”