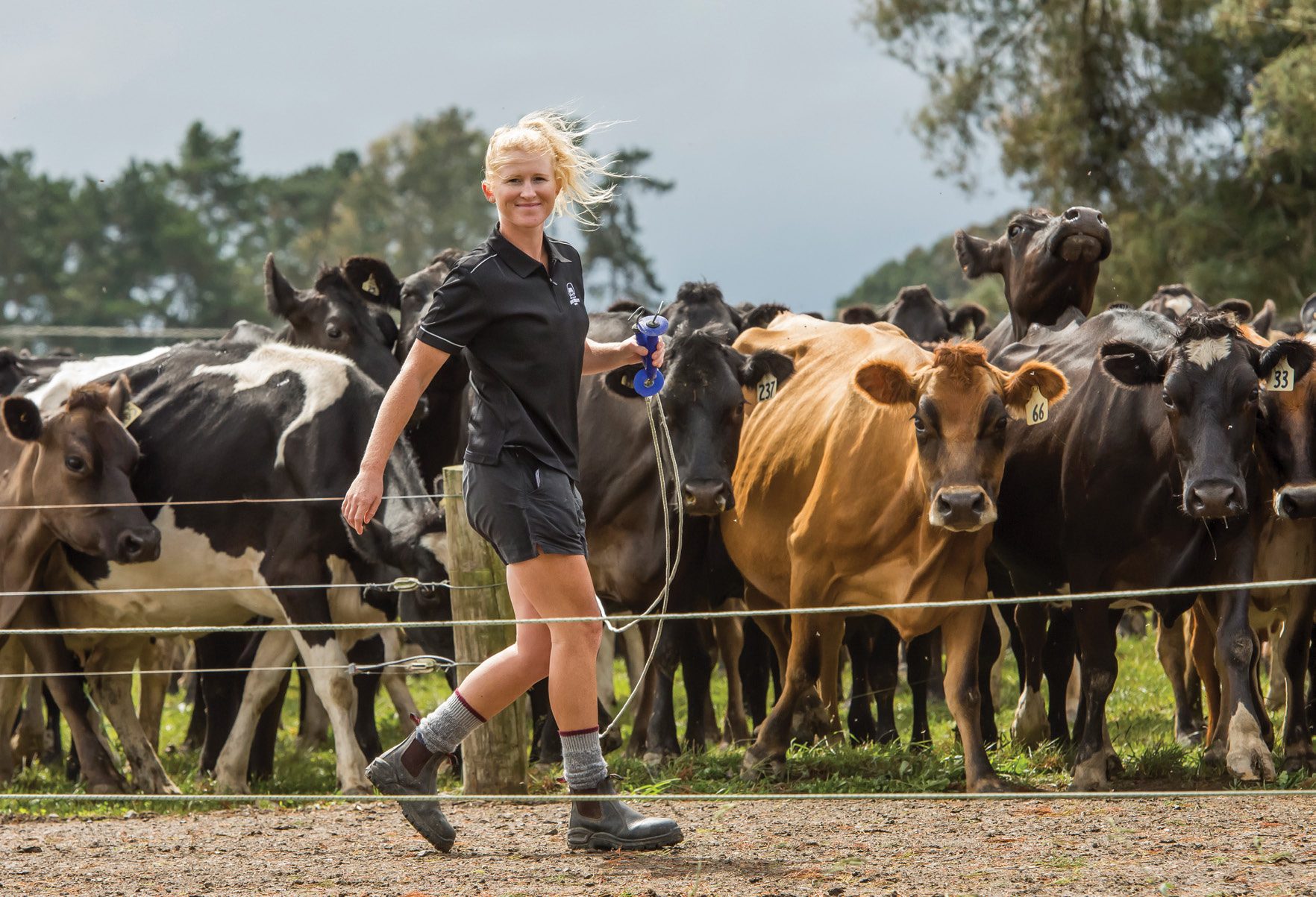 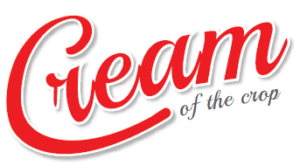 Danielle Hovmand not only won the Dairy Industry Share Farmer Award for the Auckland-Hauraki region but also took out six of the merit awards.

“I was really stoked, I have been working on it for a long time – and it carried on from my entry last year, so I thought this season I would give it a really good crack, so I knuckled down and focused on it.”

She had to settle for watching the awards online as she was self-isolating onfarm in Patetonga, with her partner Harry, a builder and ex-farmer. Danielle did have a celebratory dinner with her parents in Katikati a couple of nights later and is hoping that the DIA Nationals in Christchurch will be on in May so she can get dressed up and attend. In general, Covid hasn’t affected her farming practices significantly.

“There was a time in summer I was waiting a month for an irrigator part, and I am now trying to get the effluent pond level down as I couldn’t use it in summer when I needed it due to that supply chain delay.”

It was the socialising and going to events that she missed the most during lockdowns Danielle is very involved with Young Farmers in Morrinsville since she moved to the district two years ago and this year is on the committee as the new member liaison.

It is Katikati where Danielle first became interested in farming, as her grandparents had a 60-hectare Hereford stud drystock farm and going out onfarm with her grandad on the horse is how she decided farming was for her. Massey University in Palmerston North is where she obtained a degree in Agricultural Science over three years. Placements were part of that degree and after a summer on a Katikati farm sharemilked by Carl Williams she was offered a job as farm manager. Wanting to be more in the hub of dairying though, after two years, Danielle set her sights on a job in the Waikato, and after a round of interviews, landed a contract milking job on the Patetonga farm owned by Sue Broomfield.

“I have been very lucky in my four years of dairy farming that I have worked for two employers who are exceptional people who have given me the opportunity to take on these new things that I may potentially not look ready for on paper.”

This is Danielle’s second year entering the awards, after being encouraged by Sue and says, “The Awards really made me analyse everything that I am doing and seeing where improvements needed to be made, especially areas where I needed to upskill so it was very beneficial for myself and my business.”

Health and safety was a big focus for Danielle and she did win the Honda Farm Safety, Health and Biosecurity Award, however it was the Ravensdown Pasture Performance Award that really meant a lot. Being a low input System 2, she uses imported maize only during the summer/autumn period to extend lactation.

Other ideas Danielle has had around breeding are to put beef cattle like Herefords or Charolais over the herd to produce a nicely marked calf for beef stock so that reduces the number of calves going on the bobby truck.

“I would like to have a 0% bobby calf rate within five years of owning my own herd, and aim to achieve this by introducing beef genetics, sexed semen, and using AB on heifers. I see reduced stocking rates as being a factor, and would like to have a majority of top-performing, efficient cows in the herd so that we wouldn’t need as many stock as we have now.”

The herd is a Jersey/Friesian cross, and the nature of the clay soil defines the farming system and the breed, which have been Jersey crossed over the years to lighten the load and impact onfarm.

Reducing heat stress is a passion for Danielle. 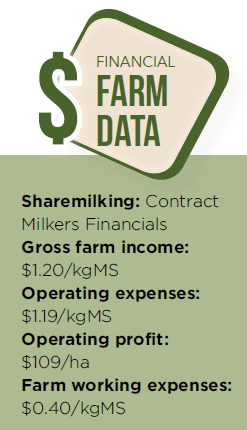 “I am fortunate that there is a lot of established kahikatea onfarm and we use a batt latch to let the cows move around onfarm at their own pace, or shift them to sacrifice paddocks that have shade. We also use sprinklers over the yard in summer, and grow and feed chicory which has a cooling effect on the rumen. Being on once-a-day milking helps reduce heat stress too, and keeps condition on the cows.

“I want to be in the industry for a long time, so once a day makes it more enjoyable and sustainable, and there is less stress on the animals.”

Early evening is a good time to use the feed pad as at that time of the day, cows will focus on feeding.

“My goal for the near future is to go 50/50 sharemilking. Being a young woman who farms by herself, it can be hard to be taken seriously and those jobs are quite sought after so being able to say I won a Sharefarmer of the Year title and having that on my CV will help people take me more seriously – showing I can get the job done and do it to a really high standard.”

Danielle says a big focus is sustainability, as new legislation and restrictions will make farming tougher, so preparing for that now will ensure she is ahead of the game. Nitrogen use will be a big issue. “We use 90kg per ha so are well under the 190kg/ha Ncap and the pasture is given a set amount of nitrogen and uses that efficiently and evenly as possible. Technology improvements such as GPS to target where the nitrogen is being put on and accurate data recordings will be helpful in the future. Flying the flag for good dairying practice is important, especially as her current farm is right on the main highway in Patetonga next to a cafe. “I love a tidy farm,” she says.

“That is my reputation and the New Zealand dairy industry reputation on show. Everyone can see what I am doing on farm.”

Next for Danielle is a similar farm in Springdale with the same owner, Sue Broomfield, but with higher production, and the goal of 50/50 sharemilking after that. With a future plan for 50/50 sharemilking, Danielle found that looking at the financial side of things and having meetings with accountants and bank managers really clarified where she was at – and where she is heading.

“Sue is very supportive, but she lets me get on with the job and has let me implement a few new things and is open to change and moving forward with the industry. Sue is great, every year she does something to improve the infrastructure of the farm and accommodation.”

One of the big challenges of the presentation for the judging was to fit everything into that 1 hour 45 minute time frame and get the key information across while also including a few X-factor details to provide a point of difference. A booklet was created for the judges that she referred to during her presentation. 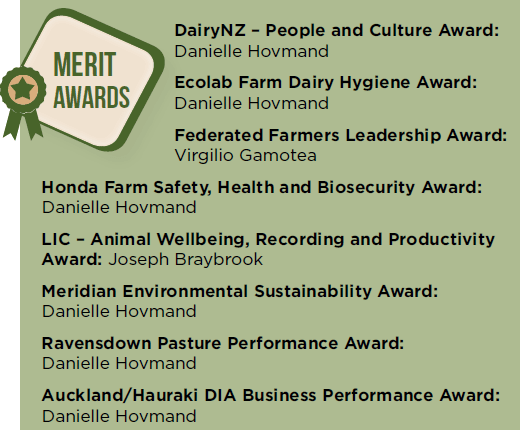 “I was quite happy with it, but I thought the preliminary round had gone better than the final round. The feedback from the judges from the first round was amazing and really inspiring.”

This motivated Danielle for the second round – though that did mean she was trying to squeeze even more into the final presentation. Having the judges onfarm was a real thrill for Danielle and a good excuse to show off the farm. In typical Murphy’s law fashion though, a storm had wreaked havoc the day before the first judging round. Two huge oak trees fell over the driveway, which meant Danielle had to detour home in her little Corolla via the paddocks.

“You think you’ve got it under control and then Mother Nature throws a curveball in there.”

“I would absolutely encourage other people to enter the Awards. I think being able to analyse your business is a really big factor – just going through everything and seeing where you can improve.”

“Potentially without the Dairy Industry Awards, I may not have delved into those aspects in depth so that has really helped me in a big way. You need to look at the ‘why’.

Being a young woman in farming has meant Danielle encountered some negative attitudes when interviewing for onfarm roles.

“A few of the farm owners, including couples, focused on how I was a girl and how I was really going to struggle in the industry – I think we have moved on from that and if someone perceives me that way there would be no point in going to work for them.”

“I hope that other women look at me doing it and think hey, she did it, so I can too.”

Danielle’s future plans include buying her own herd, farming sustainably and looking at current practices to try and futureproof for upcoming legislation.

vamtam-theme-circle-post
 Category Dairy Exporter
Pareka farm has gone through a significant change in farm system this season with the aim...
 Tags Dairy Exporter May 2022, Special Report - GHG Emissions
Read More

Perks on the jobWelcome to the rain