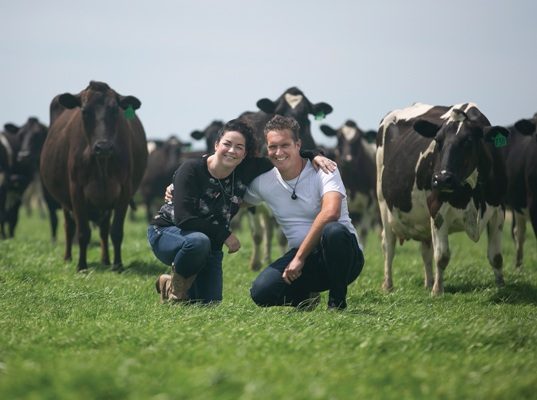 There’s a word that sums up Brent and Rebecca Miller’s philosophy.

It’s a word they’ve coined and it speaks to the core of who they are and what their business stands for.

It is them and it drives them.

But it not only inspires passion and joy in what they and their farm team do, it makes the business financially successful and sustainable.

The word is “Farmily”.

On its own it speaks for itself, Rebecca says of the term she and Brent have trademarked.

They’re striving every day to create a farming family culture within the 2600-cow farming operation they run via their variable order sharemilking business for Rangitata farm owners Andy and Rachele Morris.

Just like a family they’re striving to support, protect, grow and nurture.

Within the farming sense those sentiments relate to their animals, the soil, water and pasture, the business itself and – very importantly – their people.

It’s the people aspect they attribute their success to – a success that stands up to scrutiny through the benchmarking they repeatedly engage in.

This year that benchmarking was through entering the Dairy Business of the Year competition.

They were judged New Zealand Joint Runners Up and won the Best Canterbury Farm Performance award along with the Regional Business Resilience and Best People Leadership awards.

The couple contract milk two farms for Andy and Rachele – Ealing Pastures and River Terrace – with the award judged on their entry for the River Terrace farm on the northern banks of the Rangitata River for the 2017/18 season.

At the time, it was peak milking 925 cows on 271 effective milking hectares but has now expanded its milking operation, bringing in land previously used as support, so that it now milks 1150 cows on 320ha effective.

Rebecca explains that “Farmily” is both a play on words and a description of a culture.

It’s about making connections, collaborations and a commitment to build lasting relationships in the primary sector, she says.

“Not just their selves – we need to protect their minds and hearts.

“And we do that by making a conscious choice daily, moment by moment, working together with each other for a common purpose.”

In doing that and in creating a “Farmily” culture people are empowered, Brent says.

That, in turn, leads to great performance. 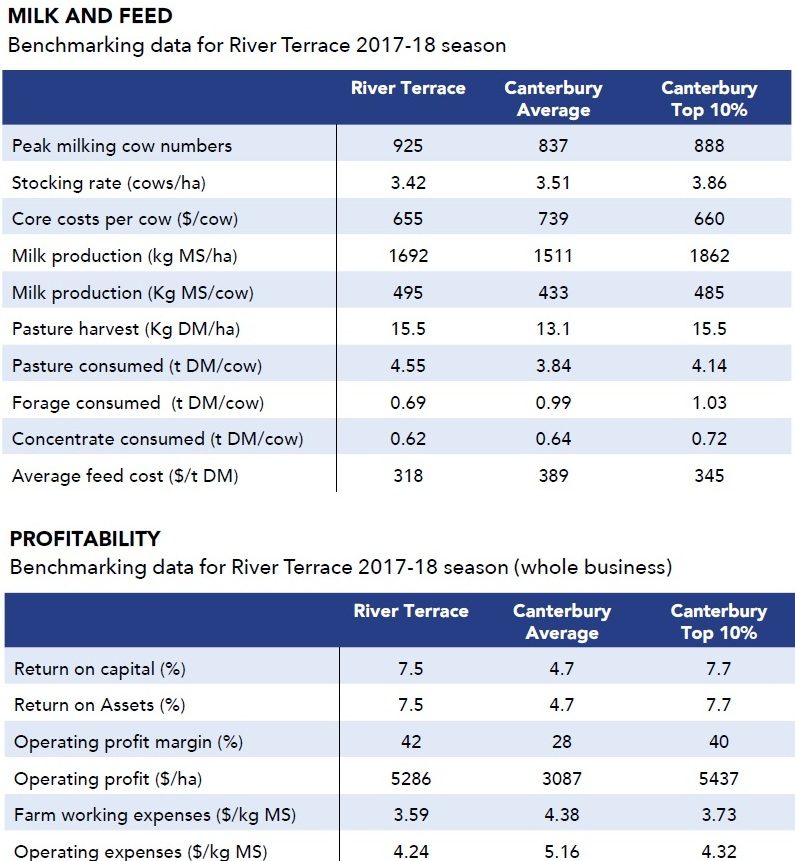 People are engaged and happily go about their work with the aim of doing their best but also feeling safe in the knowledge that, if they fail or something goes wrong, the whole team has their back and that they will learn and grow from the experience.

“Honesty is what we want from people and a will to learn. That’s what we look for when we’re recruiting,” Brent says.

“If you want a job where you just milk the cows and drive a motorbike this isn’t the job for you.

“If you want a place with a bit of a challenge, a place that will give you the tools to do your job well and back you up then this is the right place.

Rebecca says they work on creating a happy, safe environment for the team where their psychological safety is just as important as their physical safety.

“We want them to feel comfortable asking questions so they can learn and so they can put their hand up for help when they need it,” Rebecca says.

“Attitude is what we’re looking for when we’re recruiting, the kind of language people use in their interview gives you a clue to that, do they want to be part of a team?

“Our guys don’t have egos. It’s not about competition or look at me – it’s about we and how can we achieve?” she says.

They operate a flat structure and when they did their most recent recruitment last year, they went to the farm team and asked them what they needed in a new person.

Brent says his aim is to skill and resource every team member to do all of the tasks on farm.

By empowering every team member more timely decisions can be made.

“That’s the concept of time as tool. We can’t be everywhere on an operation this size so it’s the person at the coalface who needs to have the skills to be able to make decisions in a more immediate way,” Rebecca says.

Enabling that can be the difference in hitting targets, surpassing them or falling short.

Their goal is always to go beyond expectation even when goals and targets are set to a high bar.

In particular they empower their team to make decisions on feed quality, problem solving and prioritising jobs.

Everyone knows what a 1600kg drymatter (DM) residual looks like and everyone is aiming to have cows hit that when they leave the paddock.

“But we have to empower them to make decisions on what to do if they’re not quite there, if we’ll move the cows on anyway and use the mower, or if we’ll put them back in for a couple of hours.

“And then we’ll want them to be thinking about why that happened, make sure that’s communicated with others,” Brent says.

Pre-grazing covers are also closely monitored with the pasture mix requiring cows to go into an optimum cover of 2800-2900kg DM/ha to ensure quality isn’t lost and that residuals are achieved.

The aim is to have cows consume 19kg DM/cow/day and is achievable when pre and post grazing targets are hit.

They feed 600kg DM/cow of supplement through the milking season with palm kernel and grain fed in the spring and palm kernel in the autumn.

Fodder beet is also grown on 10ha of the milking platform and used through the autumn to lengthen the round and transition cows to their winter diet.

Everyone understands and knows what the farm plan is on a weekly and seasonal basis.

“No one is operating in the dark or in isolation,” Brent says.

“As soon as we know they know,” Rebecca adds.

The management plans are written up on boards in the farm dairy office with those responsible for specific tasks updating them as needed.

“Communication is the key here; it’s happening all the time on both a formal and informal basis. It’s just part of what we do,” Rebecca says.

In preparation for calving, for instance, the spring feed budget is worked out early in the winter.

Brent says growth rates are constantly monitored and the situation is updated so there are no surprises heading into calving.

“We’re talking about it, updating the plan and prepared.

“Once we’re calving the information’s updated on the board every day by the team.

“Everyone can see clearly, at a glance, what’s going on, the number of cows calving, how many cows in each mob, where everything is.”

From there the information is transferred into the farm diary so that comparisons can be made between seasons.

Monitoring, checking and observation are absolutely critical as is recording the information, sharing it, talking about it, making plans based on it and then monitoring again, Brent says.

“We understand their goals and they understand ours. They know where we’re at on the farm through our monitoring and reporting and are there when we need them but happy for us to get on and run the day to day activities,” Brent says.

Just as the farm plan is clearly set up and monitored so too is the farm’s financial performance with budgets set on CashManager Rural and monitored monthly.

Rebecca says the tactics for tight times has never really left them and they’re always thinking about cost versus value.

Benchmarking too is a well-used tool to ensure they can analyse their operation and see areas where they could improve.

“We’ve been able to grow quickly and pretty dramatically here with Andy and Rachele.

“There’s a mutual level of trust and respect and continuing to build on our people-focused culture, to continue to build our ‘Farmily’ is definitely going to help all of us – Andy and Rachele, us and our people on farm achieve our goals and have a fantastic time doing that,” Rebecca says.

Check out the Millers’ Farmily Values: