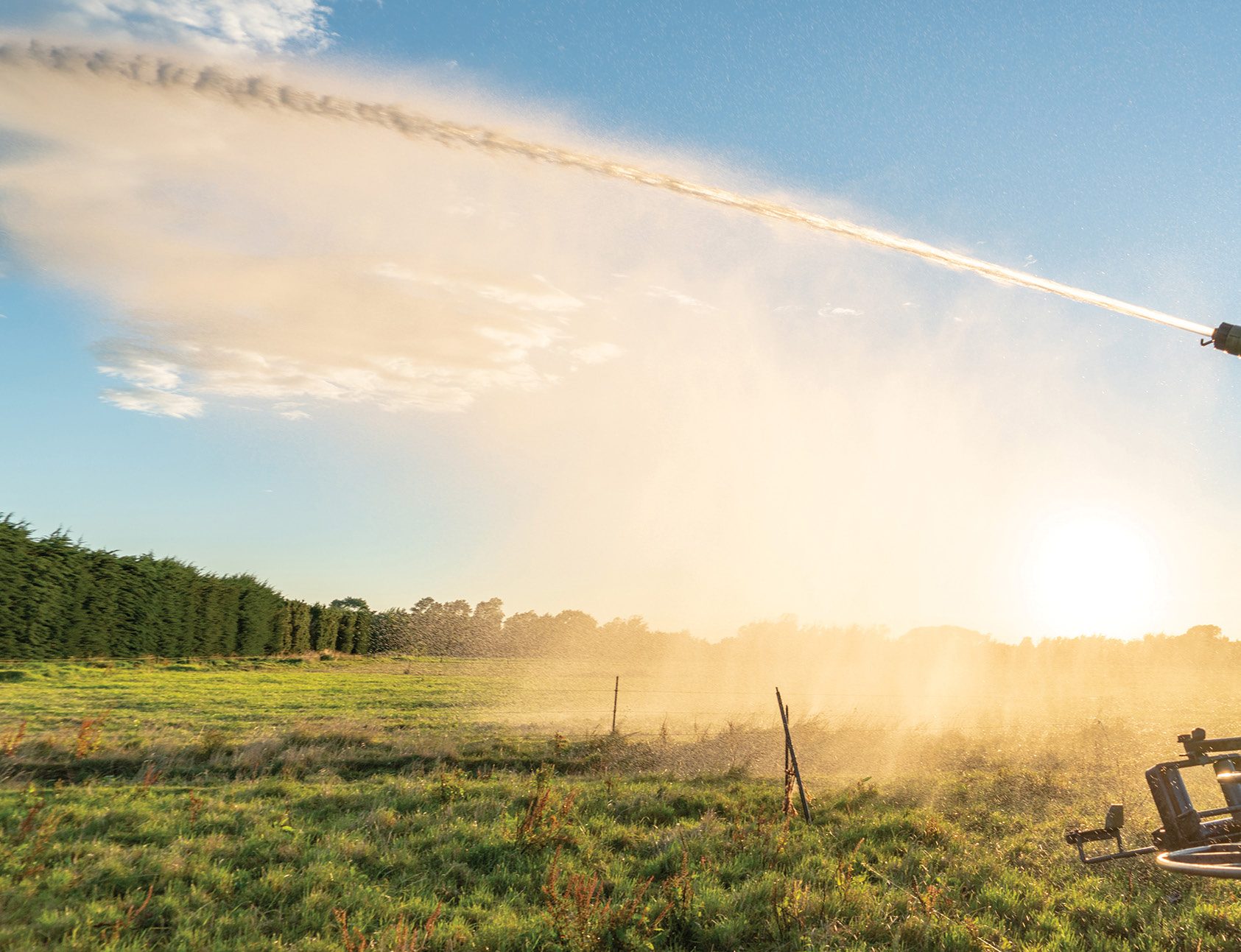 Their development is based on NIWA’s advanced weather forecasting system and onfarm rainfall and soil moisture monitoring to understand the soil and drainage. For farmers, it means they can use those tools to manage irrigation better on individual farms. The programme, funded by the Ministry of Business, Innovation and Employment (MBIE), included the pilot farmers, NIWA, DairyNZ, Fonterra, AgResearch and Irrigation New Zealand. At the heart of the programme are onfarm weather stations which provide farm-specific information for the farmers. The NIWA-operated weather stations provide information to a regional weather forecasting system. Every six hours, NIWA generates high-resolution (every 1.5km) weather forecasts that are corrected for terrain and local weather observations to provide the best estimates of rainfall, temperature and wind at the individual farm scale.

NIWA principal scientist and Irrigation Insight programme leader, Dr M S Srinivasan, says the programme aims to help farmers understand the economic impacts of their irrigation management choices. To do that, the pilot project has captured a range of economic information such as changes in electricity usage, changes in pasture growth due to changes in irrigation, the cost of water and the potential loss of nutrients below the root zone via drainage.

The programme focused on developing tools that could collect and interpret data for farmers to make irrigation decisions. The tools take into account rainfall, irrigation, solar radiation, relative humidity, wind speed, soil moisture and temperature from the surface down to 8cm below, pasture production, river flow and water use, combined with knowledge of climatic, soil, specific onfarm irrigation practices, irrigation infrastructure, irrigation supply-demand dynamics and the high-resolution weather forecasting. That data is telemetered every hour and is available for farmers 24/7 in real-time. In short, a lot of information at farmers’ fingertips and importantly, easy to understand and use.

IrriMate is an operational tool that works out how much irrigation is needed on a given day. It incorporates soil properties, current soil moisture, future rainfall, evapotranspiration and costs of irrigation to help farmers choose when and how they irrigate.

It is designed for efficient on-farm irrigation and it does that through what it calls the Insight plot. That visualises measured and forecast soil moisture movement, weather forecasts and potential pasture growth. It shows soil water conditions within and below the root zone, the effect of drainage and daily pasture growth linked to the available soil water within the root zone.

The third tool is a mobile soil moisture sensor, SoilMate, that measures the variability within an individual farm. It combines soil water measurements and NIWA’s high-resolution weather forecast to provide a site-specific six-day soil moisture forecast. Farmers can use it around the farm to fill the data gaps to give them more confidence in their decision making.

NIWA’s principal scientist, Graham Elley, says most farmers want to be proactive about how they work with the environment, deal with public perception and regulatory bodies, as well as concerns about the impact on their livelihoods. So the researchers were conscious that farmers needed to get real benefits from the programme.

The challenge now is turning it into a commercial service that helps farmers and he says that may be via a subscriber service to NIWA, though it is also in discussions with other technology providers.

He says there is an acceptance the programme makes a difference and the challenge now is making sure its benefits are realised so it is not left on the shelves. He suggests the outcome of the programme will depend largely on demand from both farmers and regulatory bodies.

For now, the programme is working with farmers through irrigation schemes which he says all have their own environmental challenges.

A catchment view of irrigation

Julie Bradshaw owns one of the pilot farms in the programme and milks 400 cows on 120 hectares at Ohoka. She uses two hard hoses, a rotorainer and sprinklers to irrigate water from the Cust Main Drain. Moisture monitoring sites have covered a range of soils on five farms that are part of a water user group irrigating from the Cust Main Drain and she says the programme has given them a catchment view of irrigation.

“If we don’t work as a group we can’t irrigate, so it has been a great tool to assist us,” she says.

Weather forecasts from the Irrigation Insight programme are more localised and have better accuracy than previous forecasting, which has enabled the group to irrigate more effectively.

Her farm has weather stations, soil moisture monitoring and GPS on the irrigators to get irrigation right. Plus, it is proof she can show regulators she is irrigating efficiently and sustainably. She is now trialling solar ear tags on the cows so she has proof of where and when the cows have grazed.

“We’re in a world now where you have to prove what you are doing. You have to be able to stand up and say ‘I’m doing the best I can’.

“The great thing with this is it can view a lot of farms and see what their moisture monitoring sites are like and that is better than just viewing a couple on my farm. It gives you a broad-spectrum view. Plus, it’s science-based and not commercial-based. And I believe science is what will keep us in farming.”

“If you have the tools in front of you and know how to use them, it gives you more confidence in making decisions. Being able to apply water when the soil needs it and keep nutrients in the root zone. In this day and age you can’t afford to be just guessing.”

At the beginning of the project he was on a different farm that used hard-hose guns and rotorainers which had a round length of 12 to 14 days. It meant he had to put on quite a bit of water to keep the paddocks going until the irrigators came back around again. The programme’s tools gave him the confidence to skip wetter paddocks and catch them the next time around, because he knew more about the soil conditions and had the forecasting information to make that decision.

Bruce Baggott and Claire McKay own another of the pilot farms in the programme. They milk 850 cows at the peak of the season on 220ha at Cust and operate seven pivot irrigators, including three full circles. NIWA set up four monitoring sites around the farm to take into account the mix of heavy and light soils and also compare the difference between soils under a pivot and dryland areas. The basic goal was to work out how to apply water without wasting water while still maximising grass growth.

They are part of the Waimakariri Irrigation scheme where they have to give two days’ warning before irrigating and likewise two days’ warning before ceasing irrigation. If they don’t, someone downstream can miss out on water or be flooded. So every morning during the irrigation season Bruce goes on to the NIWA site to check the soil moisture on different areas of the farm. He says the information helps them make more informed decisions so they can irrigate “just in time” rather than “just in case”.

That means they are irrigating more efficiently, at less cost, for better environmental outcomes. Instead of running the pivots in the ‘just in case’ scenario, they run them because the data tells them when to irrigate and how much to irrigate. He uses the mobile phone app to check soil moisture data as well as sitting down at the computer to analyse the graphs and data that provides information that he says is easy to understand.

“NIWA has such a big team behind them so you’re accessing all that knowledge and intellectual capacity.”

Dr Srinivasan says farmers are bombarded by salespeople trying to sell products and thinks the industry has a role to play in guiding farmers to science-based tools that can make a real difference to how they farm. The Government and regulators also have a role to talk to farmers about what tools they should be using to improve the environmental, social and economic aspects of their business.

The next step is working out how they take this science further and provide farmers with the information to support their daily management and strategic planning of water use over the next 20 years in a changing climate.