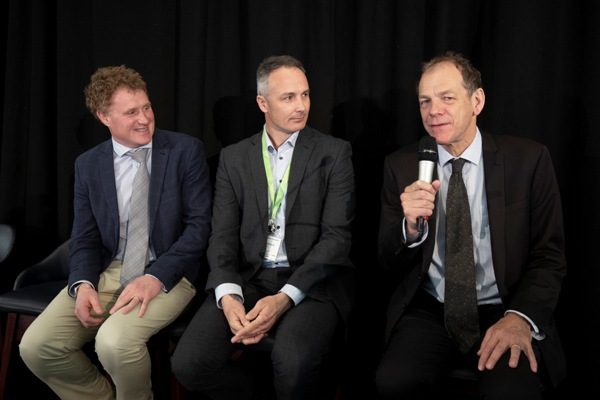 Proposed Reserve Bank changes to banking rules highlighted the need for farmers to look for alternative sources of capital other than bank debt during a banker’s panel discussion at the recent NZIPIM conference. Anne Lee reports.

Based on a panel discussion at this year’s New Zealand Institute of Primary Industry Management conference, a push-back on any touted increases in mortgage lending rates as a result of the changes could also be expected given the level of profit the major commercial banks make each year.

Those changes include an increase in the amount of capital banks are required to hold from 8.5% to 15-16%.

Banks would have up to five years to boost their capital holdings under the proposal and Fiennes said the Reserve Bank is still open to discussions over that timeline for transition.

He explained that in practice the increase would not see a doubling of capital held and to claim so was misleading.

That’s because banks are already generally holding 10-14% to avoid any penalties if they slip below the current 8.5% rule.

“We’ll be asking them to stay above 16% but they’re not going to be penalised if they dip down below (as they are currently) so they won’t need to keep such a high buffer,” he said.

NZ’s trading banks have indicated the proposal would add 50-120 basis points (0.5-1.2%) to interest rates but Fiennes said the Reserve Bank’s estimates were for a 20-40 basis points increase on average across bank lending.

“The main issue is how much of that increasing cost is actually passed on and whether banks will take a slightly lower return on their capital,” he said.

Competition to provide lending, farmers’ access to other forms of capital and the length of the transition period could also influence the effects of Reserve Bank changes.

NZ banks earn a return on equity (ROE) of about 17%, second only to Canada at 20%, while Australia sits around 14-15% and other countries have ROE’s in the teens or below 10%, Fiennes said.

‘The main issue is how much of that increasing cost is actually passed on and whether banks will take a slightly lower return on their capital.’

While some on the panel were sceptical about farmers’ ability to demand banks “take a haircut” on profitability Sutherland said most farmers were quite happy to have a chip at banks on how much they made.

He said everyone would have their part to play in having the one-in-200-year insurance and he expected customers would see banks respond in “sensible ways.”

Fiennes said that while rural sector resilience had improved over the last five years the level of indebtedness was still high.

That indebtedness though is not carried evenly.

About 35% of dairy farm debt is held by those that have debt of more than $35/kg milksolids (MS) and on average they need a payout of more than $6.20/kg MS to break even.

The panel was unanimous in agreeing that for the primary sector to continue to grow and transition into an economy that delivers high-value, premium goods it needs access to capital.

“We need an environment where we have access to good quality, affordable capital,” Hope said.

The transition to new capital standards equated to about 70% of banks’ profits over the transition period and given other sources of debt capital are also regulated it’s likely that for both agricultural lending and business lending the price will go up, Hope said.

Land values are at risk given overseas investment has become more difficult.

Farmer purchasers had helped keep the market liquid but now, with stresses on farm businesses, even those in a sound financial position weren’t as active in the land market, Love said.

“They’re more likely to be turning to their own businesses and looking to strengthen them, to hold more equity so they have the potential to withstand shocks – whether they’re capital, environmental or product driven,” he said.

Over the past 20 years, debt had been allowed to grow and in defence of that Love questioned whether the economy would have been able to grow and be as strong as it has been without it.

While access to capital is still necessary, having farming businesses on a profitable footing is imperative so returns are there to service and pay down debt.

Love said he has Mum-and-Dad farm business clients with a return on capital of 4-6% with some at even higher levels of 8-10%.

“If you look at that with a backdrop of an international market where investors are struggling to find 2-7% returns, New Zealand agriculture starts to get interesting again,” he said.

Industry needs to engage with the Reserve Bank over coming weeks, before it announces its decision in December, to ensure the transition period in particular, and the new standards overall will be something the sector can live with, he said.

“If we have enough time we may be able to engage with other forms of investment to strengthen up balance sheets and enable businesses to grow.

“We just need to find another path,” Love said.

Not everyone has the same access to bank capital and those that can least afford changes to lending criteria will have to think about alternatives to bank capital, Sutherland said.

That may mean a rethink on ownership models.

Those who are highly leveraged need to get themselves into a less vulnerable position by paying down debt while interest rates are low and returns good and to keep doing that through the transition period the Reserve Bank is proposing.

“The closer you are to financial distress, the longer you stay there, the less likely it is everything is going to go ok for you.

“So then you say – what can I do in the next one or two years that I perhaps haven’t considered before – is my business actually investible, what’s stopping someone else putting money into it?” Sutherland said.

Businesses will have to show they are “investible” and if they can do that they will have more choice about where capital comes from.

“We absolutely need capital into the (farming) sector but it just can’t all be debt capital,” he said.

Rural professionals would play a major role in helping clients report and review their own businesses, how they measure success and profitability, how they plan for investment.

“It’s not just what’s your farm budget but what’s your rationale and goal setting process? How do you explore what you and your family are looking for?” Sutherland said.