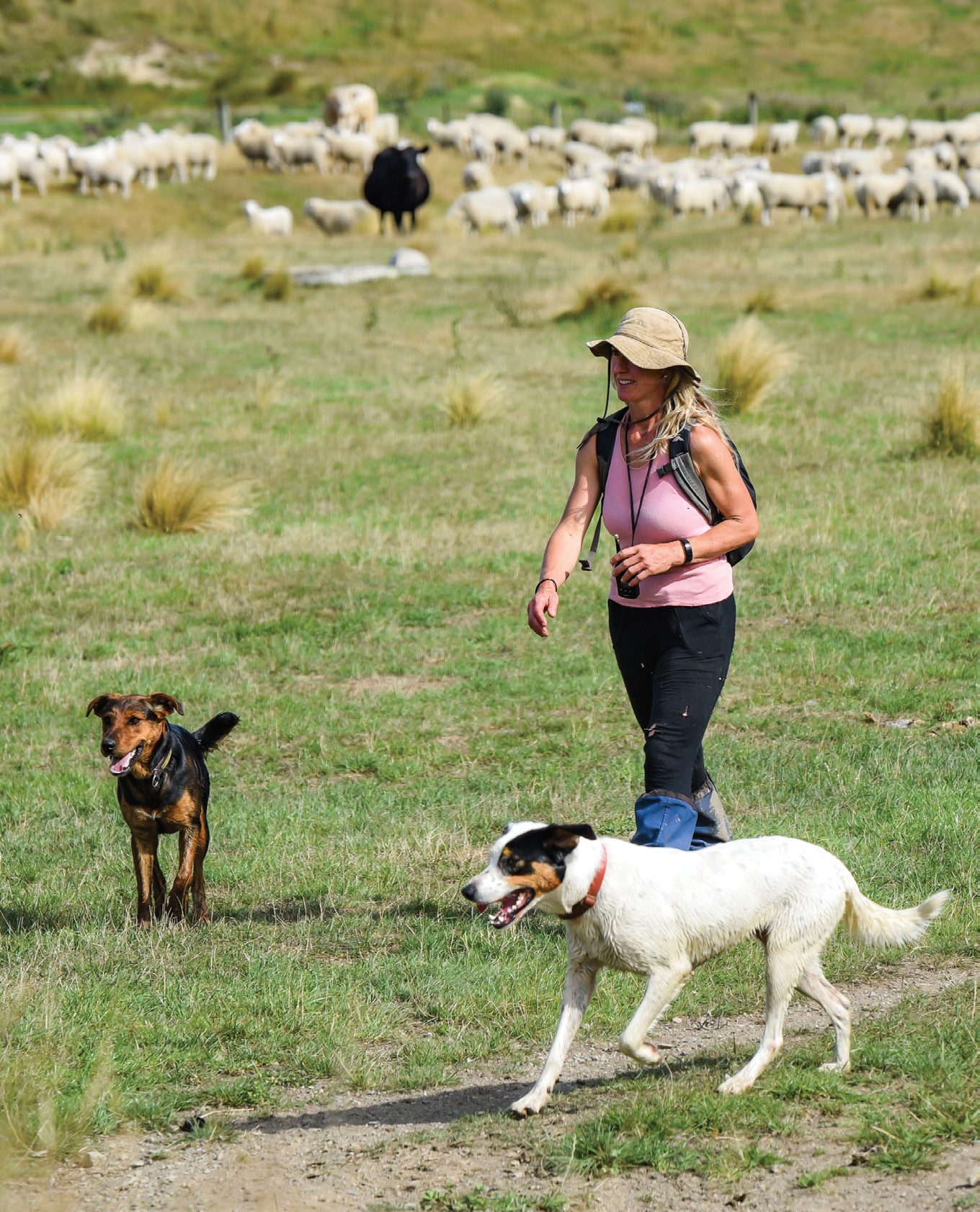 Feed, good genetics and monitoring are the cornerstone of an Otago farming operation which Terry Brosnahan revisits after 17 years. Photos by Chris Sullivan.

Feed, good genetics and monitoring are the cornerstone of an Otago farming operation.

Margaret and Steve Vickers farm in partnership with their son Spud (Greg) and his wife Carmen. Two farms in East Otago; Rathenvale, a 972 hectare run inland from Palmerston and Kartigi, 520ha on the coast. Anyone who travels along SH1 can’t but notice the yards and hard-looking hills on the other side of the railway line near Shag Point.

Since Country-Wide visited the Vickers in 2003 they have bought a 69ha finishing block near Balclutha.

Their mantra is still the same.

‘Keep it simple and do the basics well.’

Steve is a hard man to catch. He’s often up at 6am, out the door by 7am and can’t wait for daylight saving to end. If you call after 8pm he may well be asleep.

“I’m great in the mornings, but not much good at night.”

At 76 he is still hands-on but says he has slowed down and doesn’t work as hard as Spud.

“He and Carmen are good workers.”

Margaret and Steve usually put in a full day giving Spud and Carmen a hand on the farms.

Steve said Spud is in his mid 40s and has good management skills.

“I’ve had my time and enjoy giving them a hand.”

They travel between Balclutha and the two East Otago farms.

East Otago climate is variable, an abundance of feed one year, dry and a shortage the next. That’s why Vickers are cautious with stock numbers and always monitoring.

“We play it by ear and keep our eyes open.”

Steve doesn’t bother about kilograms of meat per hectare or earnings before interest and tax. However, the stock reflects the benefits of top stockmanship.

They monitor the feed and stock all the time, focusing on per-head performance rather than stock units per ha helps handle climatic fluctuations. When a drought hits, they can reduce production but still carry the same number of stock. It means not quitting stock in a bad year and having to buy in when everyone else is.

What financials they do have to hand they keep to themselves even what they averaged pricewise for stock last year.

The run, Rathenvale, is split into six blocks and has 61ha of easy country at the front of which 10ha is riverbed. An easement over a neighbouring farm links the paddocks to the run. A house was built on Rathenvale eight years ago where Steve and Margaret live. Spud and Carmen are at Kartigi.

The rams still come from Turanganui and the flock is lambing 140%.

“They are still doing a good job for us.”

Blackface rams go over the terminal mob ewes at Kartigi but only Perendale rams run riot on Rathenvale.

Steve says it is good tussock country from which they kill lambs at 16-17kg carcaseweight (CW), some years, 18-19kg.

“It takes longer and more feed.”

Weaning is late at Rathenvale, this year early March, with the muster a family affair. Their daughter Anita, who owns and runs a 243ha farm near Kartigi by herself, helps out. Due to time constraints the lambs are not weighed at weaning on Rathenvale. This year 130 went off to the works averaging 16.5kg CW. About 1000 were sold through a stock agent store and 300 ewe lambs retained. A few smaller lambs are taken into the winter.

The 110% lambing on the run was disappointingly lower than usual due to a high number of dry ewes. Normally they get 1500 lambs off fewer ewes. Ewe numbers increased after a good autumn last year.

Spud crutches the ewes then they go back out on the hill. In early May the rams go out, for a late September/October lambing. The lambs are tailed mid-November.

Until last year they did their own pre-lamb shearing July/August but the building of their new woolshed at Rathenvale was delayed.

So they hired contractors.

Steve says it cost more than half the wool clip.

“If you are going to employ people you have got to have reasonable facilities.”

The woolshed has been at Kartigi for about 30 years. It came from a neighbouring farm which was sold to forestry. The Vickers pulled it down and shifted it by tractor and trailer then had it rebuilt all for $10,000.

Someone had to go down the road to check the traffic cop wasn’t there before the tractor and trailer made the short trip. Each time the traffic cop went past the pile got higher and higher.

Spud shore all the Romneys, bringing in a small mob each day.

“He’s a farmer-shearer who shears well.”

Anita who was top of her shearing course shears just as well if not better. She shears all her own sheep.

The lambs are weaned in late December though the terminal mob is earlier to get a few away before Christmas.

Margaret looks after their grandchild, Spud and Carmen’s boy Tyler who is eight years-old.

Steve says the strength of the farming operation is the hill country, natural water and the balance the three farms bring.

The weakness is a dry winter and spring which doesn’t happen often; the last time was four years ago.

They farm to the conditions. Pastures are not eaten too far down and some always held back for the East Otago dry.

“If there is not much reserve you can be in trouble.”

In a good season the surplus stays in the ground and the cattle can eat up to two years later.

As well as finishing lambs at Balclutha about 300 one-year ewes to blackface rams are wintered there, lambed and gone by the end of December. Store lambs and a few young cattle are run in the new year.

All the ewes get a five-in-one injection and the two-tooths a toxo shot as well.

Monitoring is paramount especially with animal health. The lambs only get a drench when they think it is necessary.

Getting cows in calf is not a problem with calving (including deaths), 95%.

The Vickers are still running the Angus, Hereford, Friesian cross they had in 2003. They have 190 cows and 30 yearling heifers over the two farms though there is little Friesian now, more Angus-Hereford cross.

Some heifer calves are bought as replacements.

The Friesian cross added fertility, frame, and milking ability. The cows produce good calves and plenty of milk to feed them.

The cross also gives longevity with some cows kept until as old as 15 years.

Cows are mated in early October to a low-weight Angus bull for the first two years starting with heifers at 15 months. Then Charolais bulls are used. He likes to buy the bulls as yearlings as they settle better.

The Angus bulls come from Kakahu, the Charolais from Silverstream and others.

They are not taken out after two cycles, but most of the cows are in calf by then.

Steve has been selling calves at the Palmerston saleyards for 35 years and has often topped the sale.

One buyer from Balclutha usually buys the Vickers’ top pen of calves.

He could sell privately but prefers the auction as it sets a price.

The farms are carrying a high ratio of cattle to sheep but the climate suits that.

Kartigi was the first farm they bought, 41 years ago.

It is well-balanced with good country and hard hills. Ridges run east to west so back faces hang on in the dry.

They are still putting on 120t of super and 100 tonnes of lime on the farm. The run gets 60-70t/ha of super every two years. About 6ha of swedes and kale is sown on Kartigi which is part of the regrassing programme.

Last year 500 bales of balage was made between the three farms.

Steve says making balage has been a big positive change as it is far easier than hay. They did put in a couple of pits on Kartigi but balage was simpler and safer to feed out on the hills. Steve says balage is more expensive and feeding it out is time consuming.

Eldest son Chris is a shearer living in Palmerston which is handy for shearing if he is not shearing elsewhere. He has shorn for New Zealand several times and around the world.

Steve was a shearer before farming and officially, only hung up the handpiece 20 years ago after a stroke.

On a Wednesday night Margaret helps run the raffles at a local hotel for The Good Samaritans. The money pays for the local old people’s Christmas dinner and goes into a relief fund for those in need.

Steve is still involved in dog trialling and they have travelled overseas together a number of times.