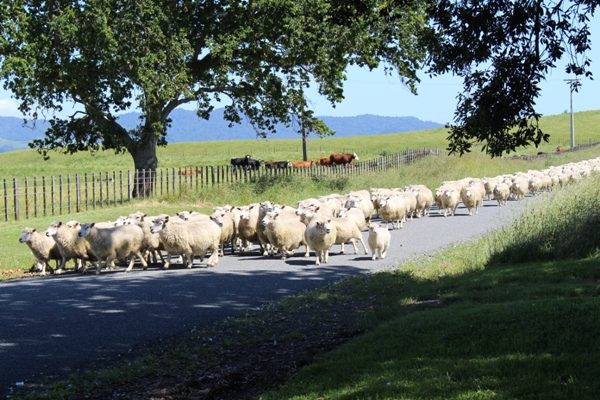 A high eczema-resistant flock is at the heart of the Powdrell family’s diverse Emerald Hills operation. Elaine Fisher reports.

Te Puke couple have gradually developed their farm into a diverse and profitable livestock operation with a strong focus on environment enhancement.

Rick and Rose are the third generation of his Powdrell family to farm the 446-hectare (382ha effective) Emerald Hills, a large part of which they bought in 1986.

Rick says prime lambs are a big part of the operation as they aim to finish all their lambs. They start sending lambs from the first week in November.

“Then aim to quit as they finish with 72% gone by the end of January this season.”

The farm runs 1950 Romney ewes – one-third are mated to South Suffolk, the rest to Romney – plus 500 hoggets.

They run a high eczema-resistant flock, something he has been working on for many years.

“Facial eczema is a huge risk here and we get challenged every year.”

Historically five-year-old ewes were bought from Taihape and they had no resistance to facial eczema.

“From the mid-70s we began to breed our own stock using rams bred for resistance and it’s working.”

Last year they experienced a long, challenging time with facial eczema, but the Romney flock had no disease although they had a little in the cross-bred lambs from a terminal ram with less resistance. This year facial eczema started late but by April they were being challenged to manage it.

They treat the cattle with a zinc bolus.

Grazing lambs and calves, or heifers and ewes together is another animal health strategy.

“They have similar feed requirements and eat each other’s worms which helps keep the worm burden down.” Separating and shifting the animals from the same paddock is not a problem; the dogs do the work.

“Our philosophy is to produce the best carcase we can.”

They are part of the Affco farm-assured programme, so their products go to its top markets. They looked at the option of marketing their own product but decided it is a very delicate and time-consuming programme.

“The figures (farm income) tell us we are doing all right.”

Rick, who has recently been elected as a trustee of the Campaign for Wool, hopes the green sustainable movement will flow into wool and wool products, ultimately lifting wool returns.

“I had what I call an historically sad moment in July last year when I got the wool cheque for the June shearing.

“The cheque and the cost of shearing were about equal.”

The multi-coloured steers grazing on Emerald Hills Farm near Te Puke are both an economic beef herd and part of a biosecurity strategy for Rick and Rose.

They source all their beef animals as calves from the dairy grazer clients and this has reduced risks around Mycoplasma bovis.

“We don’t go to the stock sales to buy calves and we know exactly where our animals are coming from,” Rick says.

“We still do all the necessary documentation and recording of animal movements but because these calves are coming from farms already within our dairy grazing system, we know their history.”

It’s also the reason it’s such a colourful herd.

The beef operation in April 2019 had 130 brought-in 100kg beef calves, 77 one-year beef steers and 23 one-year beef heifers, 100 two-year-old steers having been finished – predominantly Simmental and Hereford and Friesian-cross. Plus, 170 dairy heifers and 170 dairy calves. Cattle are sent to the works as two-year-olds from September through to the end of March.

One of their clients has a dairy herd of Jersey, Ayrshires and KiwiCross and uses Simmental bulls over the cows and Hereford bulls over heifers.

“So we end up with a mixed bunch.”

Another advantage is that they are all hand-reared so are very quiet and easy to manage.

Two years ago, the Powdrells developed a policy around biosecurity and Mycoplasma bovis in particular, which included where and from who they would source beef cattle.

As of next year they will have only two dairy grazer clients, where once there was five.

Rick and Rose and their adult children Matt and Emmalee who are part of the farm’s governance team, take stewardship of the land and environment seriously. In fact, it’s something of a family tradition.

“My Grandfather Jack bought the farm in 1939. Both Jack and my father John were forward thinkers. They did some great things which have benefited the land, such as fencing off steep gullies and gorges and we’ve continued that.”

Carrying out work which enhances and protects the environment is rapidly becoming part of a ‘social licence to farm’.

“I’m involved in a group encouraging farmers and orchardists around here to look at setting up a sub-catchment group to focus on protecting waterways and water quality, to enable us to get ahead of the ball game and any regulations which may be coming.”

In the early 1990s Rick and Rose approached the Bay of Plenty Regional Council to undertake environmental protection work on their property.

The first thing they did with BOPRC was create a soil and water conservation plan, and they carried on from there.

“We are very lucky in this region to have in the Bay of Plenty Regional Council, a council which is one of the most proactive in the country in working with farmers to support their environmental efforts and to spend money on the ground.”

There are economic benefits for farmers in spending money on the environment.

“I did a rough figure which shows we have spent half a million on fencing out gullies and wet areas since the early 1990s.”

Rick says one of the immediate advantages is that they no longer lose stock over the gully or by getting stuck in a swamp.

“When you consider a cattle beast is worth around $1500, that pays for quite a lot of fencing.”

Emerald Hills is surrounded by waterways which eventually flow to the Maketu Estuary and out to sea so there’s a focus on run-off and soil and sediment loss, including phosphorus into waterways.

Fencing off gullies and constructing detention dams has helped slow the loss of soil and sediment.

Previously in one gully fed by two big springs, cattle walking through the paddock formed a ditch eight to 10 feet deep and in the wet got stuck there, so they built a dam.

They now have about 30 detention dams around the farm. In a very dry season like the past summer, when they dry out, they realise just how much sediment they are catching.

From time to time a digger is brought in to clean out the dams, using sediment to spread on paddocks or top up the dam wall.

The detention dams have a pipe through the dam wall and a wide spillway that allows some storage of water, and in flood conditions allows a steady and slow release of water over the spillway.

Poplar poles have been planted on steeper areas of the farm to help control erosion and provide shelter for stock. Some areas are now grazed only by sheep, in a further measure to prevent erosion. About 2500 manuka trees have been planted on the steeper parts of recently retired areas, largely because wild deer won’t eat them.

Four years ago Beef + Lamb NZ approached the Powdrells to become one of two Environment Focus Farms in the central North Island. The three-year project’s goal was to highlight onfarm environmental work, how to go about it and how farmers can involve local bodies.

One significant result of the project was installation of troughs across a large portion of the Powdrell farm, which previously relied on spring-fed dams.

At that stage about two-thirds of their farm didn’t have reticulated water, so they put down a bore, and bought lots of troughs.

“It was not a cheap operation, costing about $150,000, but in the summer drought we have just had we would have been stuffed without the new system.”

Rick says it has not only provided reliable water but given more options about where to put stock.

There’s still more to do and about $25,000 for environmental enhancement is included in Emerald Hills’ annual budgets.

he songs of bellbirds and tui, and native pigeon in their garden, plus the satisfaction of knowing their management practices are having a positive impact on water quality, soil health and biodiversity. They are sources of pride for Rose and Rick, but so too is operating a profitable, mixed drystock farm providing an income which makes it possible to carry out environmental work.