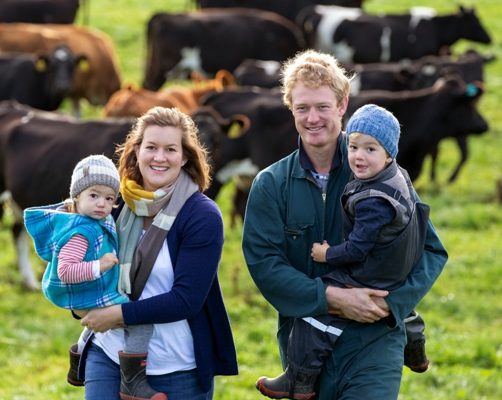 Sharemilkers Nic and Clare Coppard are considering what land ownership will look like in the future with climate change and environmental regulations afoot. They talked to Sheryl Brown about making the right decisions for their family and the environment.

Nic and Clare Coppard are following the traditional dairy pathway as sharemilkers and have a goal to own their own farm one day, but where and how they will be farming is still up in the air.

Their eyes are wide open to climate change and they know their business is going to have to be environmentally sustainable to be a success, whether that’s a multi-tier dairy farm, or something completely different.

The couple have plans to buy land potentially at Pahiatua, where Clare grew up on a sheep and beef farm or around the Wairarapa, Tararua or Manawatu.

“The environmental effects in 20 or 30 years, if you look at climates and rainfall, if things are going to change, it’s slightly more sustainable down there.””

They are open to moving wherever the opportunities arise, but sustainability due diligence will be at the forefront of their decisions.

‘Dairy is the best way to make cash for now, you need to have the funds to diversify or do something different.’

Nic, 28, and Clare, 31, are sharemilking 290 cows for Mike and Wendy Rowe on the flat to rolling farm at Hinuera in the Waikato.

The challenge for any sharemilker wanting to make a positive impact on the environment is they don’t yet own land to make the decisions.

The couple are excited about the work underway to fence and plant the Waipahihi stream on their current farm.

“Our goal on any farm we are on is to help improve the environmental footprint,” Clare says.

“Planting isn’t everything, I get that, but it’s a nice way to start.”

They are lucky with farm owners Mike and Wendy who want to get stuck in with waterway protection, she says.

This is their third season sharemilking for Mike and Wendy, and the couple are keen to continue to build equity and pay off debt before making their next move.

Dairy farming is providing them with the opportunities to build equity to pursue their dream of land ownership. When they have enough equity they might be able to challenge the traditional farming model, Nic says.

“Dairy is the best way to make cash for now, you need to have the funds to diversify or do something different.”

Nic grew up on a sheep and cropping farm at Christchurch before his parents moved to the Waikato during his high school years. He started relief milking and when he left school he got a job milking 340 cows for Paul and Chris Mackenzie at Matamata.

“I was thrown in the deep end from the start, I learnt things that a lot of other farmers haven’t learnt about – how to feed cows on complex diets.”

Nic started study through Primary ITO and has completed Levels 3, 4 and 5.

Paul and Chris were extremely supportive employers and gave Nic opportunities to boost his equity through stock trading. They bought 150 cows to winter milk and Nic was able to buy a quarter of them, which they sold in spring for a good profit.

“They saw my potential and were really good at giving opportunities. We have remained close with them and Paul still rings me if he needs a tractor driver.”

Early on, Paul and Chris made it a condition for their contract milker Andrew Bouton to employ Nic as farm assistant.

Nic later took over as contract milker for three years and then went sharemilking 600 cows with Andrew, and their respective partners Clare and Sarah. Clare and Sarah were nursing together at Waikato Hospital, which is how Clare and Nic met.

Nic and Clare bought into a third of the sharemilking partnership, pooling their savings for the deposit.

“It was really scary investing my nest egg and I didn’t know much about dairy farming and I was so averse to risk and debt,” Clare says.

“I was always taught to be frugal, my dad worked hard to reduce his debt.”

The balance of her being risk-averse and Nic more risk-savvy is good for making decisions.

They sharemilked for Rex and Nyrene McLeod near Walton who were really supportive of the sharemilking partnership.

“They allowed us to be introduced to sharemilking. Having Andrew and Sarah, and Rex and Nyrene work hard to maintain our sharemilking partnership to help us get to where we are today.”

The sharemilking partnership worked well, because Andrew and Nic were both on the ground.

“You make more milk when people on the ground are invested with a stake in the business,” Nic says.

“If you have debt, you have to do well.”

The couples stayed sharemilking together for three years before Nic and Clare moved out on their own.

They bought Mike and Wendy’s herd, which had been on the farm for 29 years.

Nic has worked to narrow the calving spread in their first two seasons and get more cows calving in July which has increased production from about 100,000kg milksolids (MS) up to 107,000kg MS.

Last mating was 10 weeks of Artificial Insemination (AI), with no bulls, ending in a 15% empty rate.

“I feel the milk we gained from calving earlier makes up for that cost.”

He is hoping to get that empty rate down this year along with their farm working expenses.

The DairyNZ System 2 farm harvests 12 tonnes/ha drymatter, buying in maize silage and using grass silage and hay on the runoff, which is a few kilometres down the road from the milking platform.

About 10% of the farm can go under water when the Waipahihi floods, which can happen multiple times in a season, Nic says.

Hopefully the flooding will be reduced this winter after council have cleaned the waterway out to prepare it for planting.

In terms of increasing their income, they’d love to rear more replacements or beef calves, but land around Hinuera is exceptionally expensive to buy or lease.

The couple are looking at other investment opportunities, including buying a lifestyle block.

They have a great professional and personal team of advisers around them that they consult about any business opportunities.

Farming for the future

Part of their sharemilking contract involves using biological fertiliser, which was a first for Nic.

He has since been to a couple of seminars in the past two years including Farming for the Future and a talk by Dr Christine Jones, which has got Nic excited about biological and organic farming.

“The mindset change of Nic over the last two years has been huge,” Clare says.

Nic has gone from being in a high-input System 5 operation to a larger scale pasture-farm and now farming biologically and wanting to plant diverse pastures. Having a family has changed him and made him realise profit is not the only driver.

“Now he sees it’s not all about having a big herd, it’s about wanting to look after the land and the soil, the grass, the cows and our family. He’s done a 180 which is really cool.”

Nic and Clare have two children, George, 3, Rose, 20 months, and are expecting their third baby in December.

Providing for their children is a key priority for the couple, but they are equally focused on having a healthy balance between work and family time.

It’s taken a few years for Clare to feel comfortable saying that she is not putting the kids in day care and going back to work to bring more money in, and she’s also not working on the farm, rearing calves or relief milking either.

“It took me a long time to not compare myself with other women who are doing everything and not feel bad. Husbands confront me and ask me why I’m not getting the cows in for Nic.”

The couple have made the decision that the first 1000 days of a child’s life is important and they value having Clare at home giving her full attention to the children.

Both of their mothers were at home on the farm during their early childhood, which is something they wanted to replicate.

“We both had a quintessential mum-at-home childhood, with warm baking in the house and dad working on the farm,” Clare says.

“We believe in that and it’s something that works for us.”

Nic runs the farm with one full-time employee and employs relief milkers so Clare doesn’t need to be on the farm working, Nic says.

“Clare and the kids come and help when they want, but it’s on a casual basis.

“We want the farm to be fun for the kids, they still see us working and know the value of hard work.”

When Clare does return to work it will be to go back nursing. She would love to set up a mobile rural nursing unit to be able to visit farmers in their home or at the farm dairy.

“I’d love to be able to go around and visit farmers and be at the top of the cliff rather than the ambulance at the bottom.”

For now, the focus is on their children, reducing debt, looking after the environment they work in and looking forward to their future as landowners.

vamtam-theme-circle-post
 Category Dairy Exporter
Words by:  Phil Poulton Recent research into the management of downer cows was conducted on...
Read More

On path to family farmFMG Young Farmer of the Year: Who will it be?