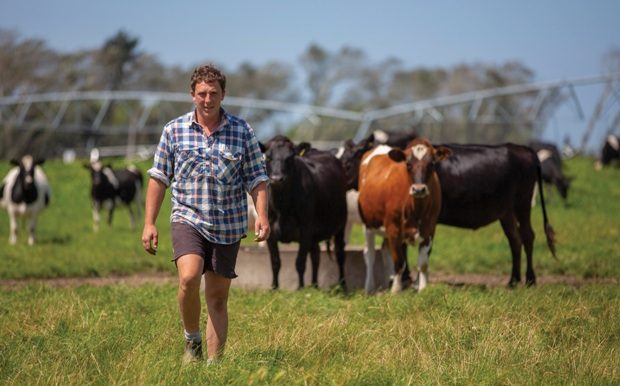 Amongst the dairy and arable farms on the rich, irrigated soils of Mid Canterbury is a Corriedale ewe flock that is generating a solid return for the Bell family.

David Bell (25) farms an irrigated 420ha sheep, cropping and dairy support operation alongside his mother Julie and sister Lizzie, in the Dorie district of Mid Canterbury.

Better known for its dairy and intensive cropping farms, the district boasts rich Templeton Silt loam soils which are widely irrigated with water drawn from both the Rakaia river and underground water resources.

The Bell’s farm is no different, with five rotorainers and two centre-pivot irrigators giving them security around production and the ability to grow both grass and crops – namely process peas, feed barley, maize (for silage) and white clover. But where the Bell’s business differs is that breeding ewes remain at the heart of their operation and the combination of meat and mid-micron wool means that their 3200 high-performing ewes are holding their own against other land-use options.

One of the idiosyncrasies of the Bells’ ewe flock is low lamb wastage and they put that down to management and the ewes’ maternal ability.

David is the third generation to be farming Corriedales and he has inherited a flock that has, over previous generations, been bred for reproductive performance, footrot tolerance and wool quality.

Combined with management strategies such as a split lambing, body condition scoring, intensive shepherding and lamb rearing, these high-performance ewes are lambing over 142% from a scanning of about 160-165% (last year they had only 1% dries) and weaning lambs of over 19kg CW.

One of the idiosyncrasies of the Bells’ ewe flock is low lamb wastage and they put that down to management and the ewes’ maternal ability.

David says it is early country so the family exploits this advantage by lambing the first lot of old ewes in July, the terminal sire ewes lamb a month later the replacement ewes in September.

While this stretches lambing out, it spreads both the risk of weather and the workload and means they can get the first lambs drafted in early November and old ewes finished and off the farm as quickly as possible.

Body condition scoring (BCS) is a valued management tool for the Bells and the ewes are scored at or about weaning and every month thereafter.

This allows them to pull out the lighter ewes and strategically feed them to ensure all the ewes are in optimal condition going into mating. Any ewes with a BCS below three are given good quality pasture supplemented with barley.

David says the process of body condition scoring is quick and easy yet helps them drive productivity and make the most efficient use of feed resources.

Ewes in peak condition are often run onto crop stubble, but that is the only integration between the sheep and cropping enterprises.

The terminal sire ewes are lambing in August which typically coincides with the start of the spring flush. David says while many of their pastures are older, they contain a lot of clover and this clover drives both lactation and lamb growth rates and gives them the ability to grow the big spring lambs for which the Canterbury Plains were once famous.

The family has been buying Corriedale rams from Robin and Pip Wilson’s Wilfield Stud for 20 years and while David’s late father Ian was focused on footrot resistance, wool type and conformation, David is now also taking numbers into account.

He says they initially select rams with a 1:1 footrot score and fleece of 26 micron and under – and then go through the figures. Fertility is well established in their ewe flock so it is just a matter of maintaining it, but they look at the figures for weaning weights, growth rates, fleece weight and eye muscle scores.

The recent expansion of their irrigation system has enabled the Bells to water the whole farm.

The quality feed from irrigation has strengthened the wool slightly to 27-28 micron. They are looking to use genetics to bring it back down to about 26 micron.

David says they used to take their top 90 two-tooth ewes (based on wool weights and type) and put them to a Corriedale ram for breeding replacements, but this meant another mob of ewes to manage and just complicated the system.

“It was more trouble than it was worth as the two-tooths had to be wintered separately because they are still growing.”

They select the replacements from the four-tooth ewes based on wool production and the results of their first weaning.

This year ewe lambs will be wintered on swedes along with 1000 trading lambs. The latter are finished on grass on the high, early spring schedule.

They are aiming to grow the trading lambs out to a 22kgCW plus and these are sold prime in September and October.

“We want the big ones,” says David.

The trading lambs are sourced through agents in January and February and while they have no breed preference, they do want cryptorchids because of their ability to grow to heavy weights. This year they have bought Romneys.

All of the Bell’s prime lambs are processed at ANZCO Foods’ Ashburton plant.

All ewes also receive Frolic mineral drench which contains iodine and selenium both at mating and pre-lamb.

For the first time last year, they set-stock the ewes at lambing, but David isn’t convinced of its merits and thinks they will go back to shepherding off.

He says it is an intensive time anyway, as they are going around the lambing ewes two to three times a day.

As they age the fetuses for lambing, they are able to focus on the ewes lambing at any one time and save pasture by keeping the later lambing ewes on feed crops for longer.

Mid-micron wool has held its value in recent years, as prices for crossbred wool have wallowed in the doldrums.

“Because our wool is worth something I want to maximise returns.

“If I can add length to lambs’ wool then it is worth a lot,” says David.

On the day Country-Wide visited the Bells, they had just received results of the auction of their 24.7 micron hogget wool and it sold for $8.39/kg with an average weight of 3.5kg.

The ewes’ wool, which ranges between 26.7 and 29.1 micron, has sold for an average $6.40/kg and weighs around 5kg. Dave says wool weights average 4.2kg across everything – that is ewes and hoggets.

Dave says these prices have eased slightly from a few years ago when the family topped with sale with their hogget wool selling for $10/kg.

But the wool, when combined with the value of prime lambs, makes the Corriedale ewes competitive.

David and Julie strive to finish their lambs to heavy weights and their first draft of terminal sire lambs, taken in the first week of November, averaged 19.6kg and averaged $8.94/kg.

The main weaning took place in mid- December and the lambs sold prime at this stage made $8.70/kg.

Old ewes, which were weaned early, were freshened up on late spring pastures and these averaged $151.50, with the tops selling for $180 and the lighter ewes making $80.

About 620 ewe lambs every year are retained which allows them to put culling pressure on their ewes.

The family grow over 100ha of crops every year and while they have typically grown feed barley and process peas, this year they have added white clover and maize to the mix.

David is focusing on renewing pastures in-line with the expansion of their irrigation development.

This year they have over 100ha in crops, the majority of which are one-year crops so the paddocks will be put straight back into permanent pasture which is a mix of Persian clover, ryegrass, white clover, plantain and small amount Greenlea cockfoot.

David says this mix spreads production of spring through into summer, with the cocksfoot performing well in the heat, unlike the ryegrass. Also, as the ryegrass runs out, the cocksfoot will spread, filling in any gaps in the sward.

Once they have sufficient area in new pasture, he would like the crop cycles to be longer before the paddocks are put back into permanent pasture.

This is the first year the family has grown white clover for seed and maize for silage and the crops were looking good in early February. They get all their agronomic advice from Wholesale Seeds and while they do most of their own tractor work and heading, they do use contractors for spraying, spreading and some tractor work.

Two years ago, David set out to transform an under-utilised 60ha block that lay adjacent to their main farm area.

It was a matter of completely clearing old trees, fences and pastures and starting from a zero base. David has designed the area to be used for dairy support, installing cattle-yards and scales and creating 6-7ha paddocks with a main laneway.

While it has the look of a dairy platform, sheep-netting has been used instead of the typical two-wire electric fences and this gives the Bells the option of grazing the area with sheep.

The family took on 239 newly weaned dairy heifer calves last year from a neighbouring dairy farm. These were wintered on 31T/ha crop of fodder beet and David says they followed a strict protocol of transitioning the heifers onto this feed and had no health issues.

During winter they were feeding no more than 2kg of silage/head/day to maximise beet intake and while weight gains over winter were about 600g/day, the heifers bounced away in spring, growing at over 1kg/day.

These heifers will stay on the Bells’ farm until May 1 and earlier this year they took delivery of 227 R1.

The family employs two full-time staff. Simon Cochrane has been with the Bells for 20 years and Alan Mason for 25 years. They also employ an extra person over lambing to help out, but otherwise it is David and Julie who drive the business. David’s sister Lizzie has been an integral part of the team, but is moving to the North Island this year.

David picked up the reins of the farm operation after his father Ian’s untimely death. He returned home with a Diploma in Agriculture and Farm Management under his belt, along with experience working in Australia, Canada and on a neighbouring farm. Like his father, the sheep are the aspect of the business he enjoys the most and the family is now reaping the rewards of sticking with Corriedales and breeding for performance.