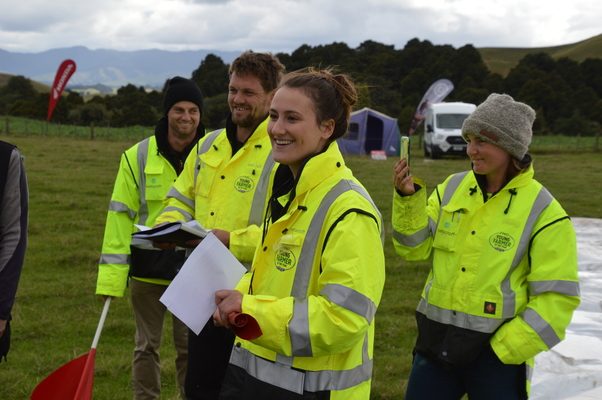 Isabelle Crawshaw thrives on the adrenalin of running events, especially ones that showcase the country’s vibrant agri-food sector.

The 25-year-old lives with her husband Patrick Crawshaw on a rolling 280-hectare sheep and beef farm at Patoka in the Hawke’s Bay.

The Eskview Young Farmers member grew up in the city, but is now a passionate advocate of the primary industries.

“I love going into schools and connecting with teachers and students to make them aware of the opportunities in the agri-food sector,” she said.

In late 2017, Isabelle set up Bespoke Events and Marketing, which specialises in corporate events, especially within the agriculture sector.

“Our highlight this year has been event managing the Napier Port Hawke’s Bay Primary Sector Awards, which were attended by 450 people,” she said.

“It’s such a buzz to be involved with events celebrating excellence.”

A fortnight after the awards, Isabelle was convening the East Coast regional final of the FMG Young Farmer of the Year.

The volunteer role was her way of giving back, and using her skills to reach and engage with even more young people.

In a rare move, a working farm was used to hold the practical challenges for the high-profile event.

Pukemiro Station near Dannevirke was transformed, with dozens of modules showcasing technology and innovation in the agri-sector.

The whir of a drone could be heard as a contestant raced against the clock to use the high-tech eye in the sky to find a water leak.

Nearby in the covered stock yards, another finalist was using the latest technology to weigh and draft sheep.

“That was a chance to throw around some ideas. We were all really keen to ensure our modules were fresh and reflected modern farming,” she said.

Isabelle got to meet the conveners of the six other regional finals at a two-day workshop in Christchurch in November.

“That workshop was priceless. It was a great opportunity to brainstorm ideas with a group of like-minded people,” she said.

“We discussed the new strategy for the contest and how it could be woven through our modules and head-to-head challenges.”

A major part of the strategy is to showcase all aspects of what it means to be a modern food producer.

It was the perfect challenge for Isabelle, who has a degree in marketing and human resources and enjoys organising events.

“I love fleshing out an idea and seeing it come to reality,” she said. “I’m a high-energy kind of person and I don’t get stressed easily.”

“I have always been one of those people who has an eye for detail.”

The majority of conveners are farmers who see running a regional final as a personal and professional development opportunity.

“Conveners don’t have to be events experts, but it’s important they’re creative and not afraid to think outside of the box,” said NZYF’s contest manager Tess Appleby.

“It’s important to have a strong committee. It’s definitely not a one person job, you have to be prepared to delegate,” she said.

“We promoted the event through local media and community Facebook pages. Plus we put on kids’ activities, like a bouncy castle, to help get more people along.”

Utilising the expertise and resources of sponsors and local businesses is vital.

“It was great taking our module ideas to local businesses and getting them excited about the event. They decided how the modules would run and were invaluable at providing equipment,” she said.

Isabelle found convening a great way to grow her contacts and networks in the community.