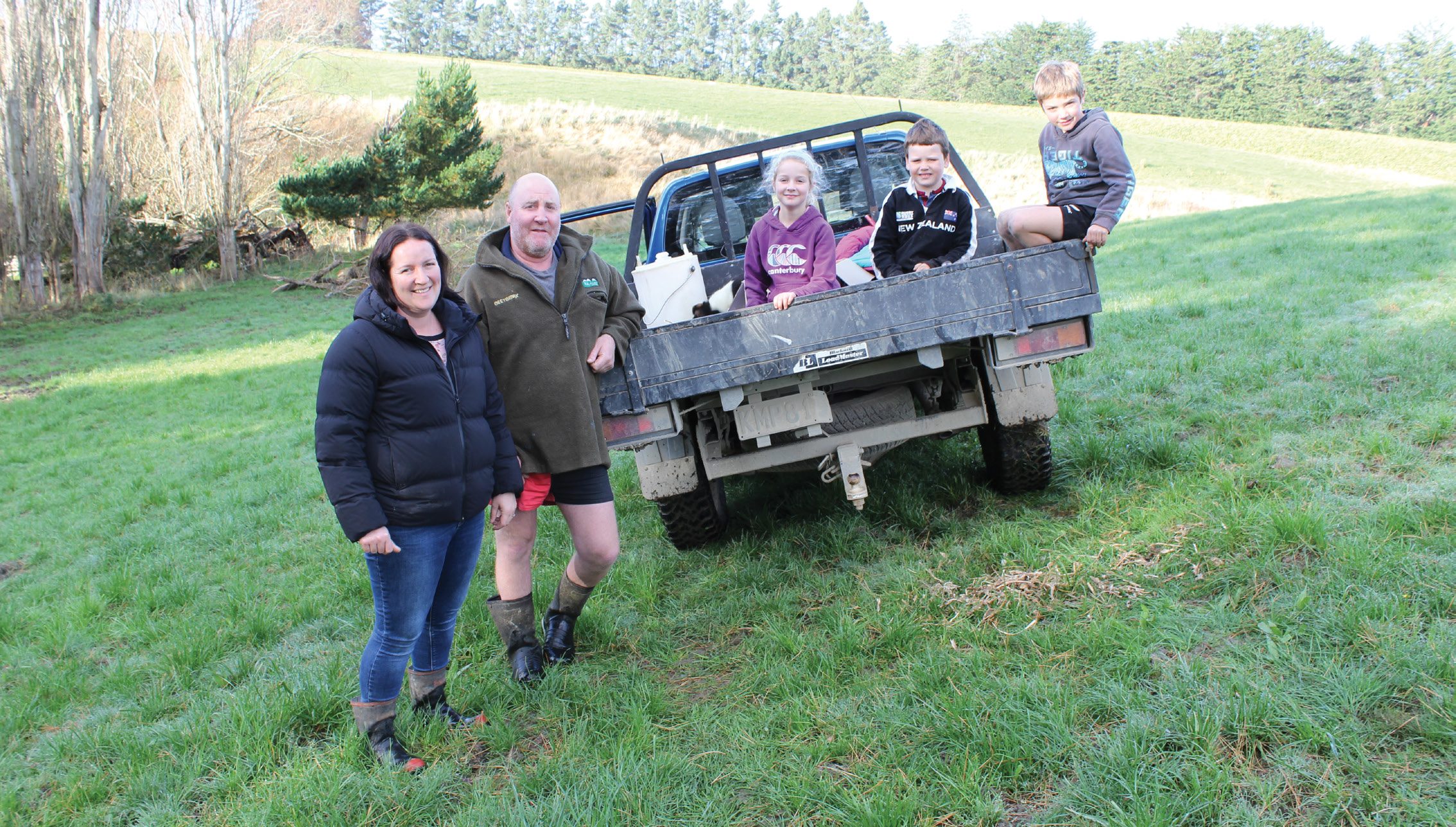 Knowing that what they’re doing is making a difference to their waterways keeps Chris and Sandra Campbell working hard.

The couple won the Bayleys People in Primary Sector Award, the DairyNZ Sustainability and Stewardship Award, and the Norwood Agri-Business Management Award in the Otago Ballance Farm Environment Awards announced via Facebook in early May.

“It’s less daunting if you do a small bit of it at a time, keep ticking off the boxes, than having to suddenly do it all at once to be compliant,” Chris said.

Their business is a simple but effective equal equity partnership with Peter and Elaine Carnie of Invercargill. Chis and Sandra are also the contract milkers for the partnership.

After years of contract milking they understood the business and weren’t keen to go sharemilking and put all of their money into livestock.

An equity partnership with old friends instead was the answer and provided the stable opportunity they wanted for their young family.

The farm was a 1990s conversion owned by Noel and Tania Caulfield when the partnership bought it four years ago.

While contract milking at Clydevale Chris and Sandra spent two years looking at more than 70 Southland farms, as well as a few in Otago, and knew the Clifton farm was for them when they first saw it.

“It was the only one we came to that felt loved,” Chris said. “And it had scope.”

The farm was bought as a going concern with Noel and Tania staying around for the transition to make sure everything kept running smoothly.

The Campbells' farm manager, Aaron Harrison, came with them from Clydevale and they’ve since added to their team Ernie Mahlobo from South Africa who is on a rural exchange programme.

Management meetings with the Carnies happen four times a year although the two families prefer to go cod fishing off Kaka Point, 40 minutes’ drive away, in the Campbells’ boat.

“We’re responsible for the on-farm management but we’re on the phone with them probably at least once a week,” Chris said.

The cows do about 500kg MS/cow/year on grass supplemented by a barley and palm kernel mix – about 500kg/cow/year fed through the herringbone’s in-shed feeding system, mostly in the season shoulders.

While the young stock are away on a May to May grazing contract an hour away, the cows are wintered on 25ha of fodder beet plus balage made onfarm.

The best beet paddocks this year are at 37t but the worst down at 18t after a wet spring that made working the ground a nightmare.

“Overall it’s about a 26t average so that’s not too bad, especially considering the weather.”

“We’re still waiting for a normal season, whatever that looks like, to really see what we can do,” Sandra said.

“I think the cows have got a lot more in the tank yet and we’re getting to know the farm better too, which helps,” Chris said.

With their breeding they pick and choose from LIC as well as CRV Ambreed bulls and this season inseminated their fifty best cows with high BW sexed semen from ST Genetics.

After six weeks of AI with the cows, Hereford and Angus bulls are run with them and Angus with the heifers. A beef farmer has a long running arrangement with them to take the resulting calves.

“Last spring I think we only bobbied 30 or 40 calves,” Sandra said.

Their Overseer figure sits at about 23kg N/ha/annum helped by having 20ha of mature pine trees on the property.

But Chris and Sandra don’t relax because their Overseer figure is within the Otago Regional Council requirements.

Instead they’re making sure they’re doing the best they can with 4ha of the fodder beet paddocks not planted, ensuring there are plenty of buffer zones to protect the critical source areas.

Old hay bales from the neighbouring Pamu farms have been placed in swales and hopefully will work as an extra filter to stop sediment ending up in the Kaihiku Stream (a tributary of the Clutha River) that borders the farm.

They’re also members of catchment groups Otago South River Care and their local Waiwera one with Sandra busy in both.

As well, she is involved in a Red Meat Profit Partnership group, is a board member at their kids’ primary school, works part time for Oranga Tamariki assisting local social workers, and is on the Southern Dairy Hub’s Research Advisory Group.

It is at the Hub that she sees the future of farmers sharing information to make life better onfarm for people, cows, and the environment.

“We used to go out to the paddock all the time and pick up the cows and calves but it was so stressful on everyone,” Sandra said.

“It used to take so much time, and calving in the paddock wasn’t great for the cows, so now we calve all of our cows on a pad.”

The pad is under the old covered sheep yards on the farm and the sheep pens have been converted into calf pens.

Old trees are chipped on the farm to use as deep bedding for the pad and there is a self-feed silage stack.

“When a cow calves now I just walk the calf up the ramp into the calving shed and the job is done. It’s not sophisticated but it works so well.

“And it’s not far from the house so I can go out in my jimjams and check the cows, give them all a scratch and go back to bed.

“There is some really cool stuff happening on farms like this but we don’t see what each of us does so if we could share it through the Southern Dairy Hub, plus with the science they’re doing there, it would be great.”

A bit of a push from friends helped them enter the Ballance awards, plus they had first-hand experience when they were contract milkers for Terry and Jacqui Carr who won several merit awards in the Otago competition in 2013.

“We had thought we should wait a few more years before we entered to get everything right but we’d been here for four years and you probably never have everything as good as you could,” Sandra said.

“It was a really great way of having a close look at what you’re doing, and farming needs all the positives it can have at the moment. It’s just a lot of fun.”

“We’re not perfect, there is still lots to do, but we’re doing a little bit all the time and I think that’s what’s important,” Chris said.

Sandra has an Instagram account – Ourwatercarejourney – where she posts what she’s doing onfarm to enhance their waterways including water testing, planting, and preparing their Farm Environment Plan.

Lloyd McCall used to be their accountant and is now co-ordinator of the nearby Pomahaka Water Care Group and has found a convert in Sandra.

He has her collecting native seeds and she is now growing her own plants for their riparian areas.

While Chris missed playing golf, taking the boat out, and hunting, Sandra’s Covid-19 lockdown project was building a tunnel house for her growing native plant nursery.

Meanwhile kids Ryan (6) and Charleigh (8) teamed up with Aaron’s son Finn (7) most days building huts in the pine trees after homeschooling was finished.