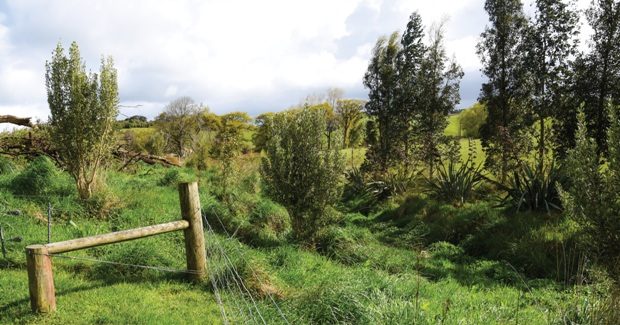 In the first of a series, Country-Wide writers look at proactive ways to handle increasing environmental rules.

A Southland couple are improving their farm’s waterways and wildlife by weaving good environmental practices into their management decisions.

They have fenced off more than 90% of their creeks which total 13.5km and have carried out considerable riparian plantings. Now they are enjoying wildlife and listening to tuis singing.

Fencing off the creeks was initially started to keep stock out and reduce losses. Now it is a family environmental project.

When they make a management decision the focus is sustainability. For example, they are restricting the use of antibiotics, minimising the impact of winter grazing and have good animal welfare practices.

“We get a kick out of not only seeing stock well-sheltered, but also the biodiversity and extra wildlife.”

It had been a wet winter and a trying spring in most of Southland. So when Country-Wide called, David insisted coming on a wet day not a dry one, so he could catch up with tractor work. When it did come dry, a month’s work was done in 10 days.

David is a member of the Three Rivers group for the Mataura, Mokereta and Mimihau rivers. He and neighbour Dean Rabbidge (see next story) are founding members. Until recently David was the chairman of the group.

Catchment groups are set up and run by farmers to improve the area’s water quality. Their group has been informing farmers about Environment Southland’s land and water plan. It has educated them on environmental issues, brought them up to speed on legislation and what to expect in the future. The group has been trying to work closely with Menzies College students in Wyndham who have been undertaking water testing.

David has done a lot of work with Environment Southland staff and the Landcare Trust. A land environment plan has been developed which covers the management of critical areas, fencing waterways, winter grazing, cropping and other practices.

Nutrient budgets give an idea of where those losses are so they can try and reduce their impact.

“It’s a rolling ball with nutrient budgets as they keep updating the software which is supposedly becoming more accurate.”

David says it is harder to justify than fencing off a creek as it doesn’t have the practical benefits like lower stock losses do.

Until 2017 he was in partnership with his mum, who was a good stockman and did the books. Since then Alanna and David, who are in their late 30s, have been farming in partnership. They have two children, Isla (8) and June (6).

Not long after David returned home he joined a local committee to establish a monitor farm. He became a Beef + Farm NZ monitor farm which brought a lot of work and scrutiny. It allowed him to rub shoulders with professionals and peers. During those four years he further developed his management and public speaking skills.

Invercargill-based ag consultant Deane Carson encouraged the Clarkes to be aware of environmental issues before they become regulated.

David’s farming methods are well-researched and he has excellent knowledge of soils.

“We are lucky ES (Environment Southland) invested a lot in soil type maps.”

They winter 4000su of their own, 135 heifer calves and 130 in-calf heifers plus winter 400 dairy cows, all from his brother Steven’s dairy farm.

A new venture is Cashmere goats for their fibre for diversification and less winter feeding. The fact that the fibre is not exported, but value added in NZ is attractive to them and they are running 40.

“We are just dabbling in them.”

The Clarkes have done a lot of direct drilling on the farm which has meant less sediment loss but also using more chemical to control weeds, slugs and other pest challenges.

They grow swedes and a small amount of fodder beet which according to Overseer is the biggest leaching crop but grows high quality feed for heifer calves. They only single crop to reduce sediment loss.

A big problem with fencing off waterways was bank erosion next to the fence lines which led to more sediment in the waterways. This was solved with heavier plantings. They have used natives and in some places pussy willows and poplars.

A stock water scheme allows them to fence off the creeks running through the J-shape farm which is 2.5km from the front of it to the back.

Water is pumped to a tank and then gravity-fed to water troughs. The water runs from a stream to a 30,000 litre tank and from there goes down a pipe to the hydraulic ram pump. After two years it has cost next to nothing in running costs.

“So far it has only needed a couple of circlips.”

On the 114ha block they recently bought, two pumps are needed to get the water up to 80m high. It took three days to put the system in which cost $200/ha including troughs.

Small koura and eels which have started to come back in the stream started blocking the water ram so a cover was needed.

Planting native trees is costly at $7plus per tree, plus planting and weed costs.

Some years they can spend $4000-5000/year on trees and another $3000 on fencing for riparian and shelter planting. There is 13.5km of waterways on the farm to fence, a creek in every paddock. So far over 90% are fenced.

Wetlands and sediment traps have been developed to help filter the waterways, giving more time for the solid particles to drop out.

A nutrient budget would be required each year and a farm environment plan ticked off every two years.

They have been doing FEP for the past 10 years with Environment Southland and Beef + Lamb NZ.

There has been no problem with that.”

“We are all heading in the right direction.”

David’s father Graeme died in 1998 and he says they were fortunate to have a good farm manager, Stu Notman working with his mother Julie. The farm was well-developed by the time David came home. It made it easier for when David and Alanna wanted to develop the environmental side of the farm.

David’s parents wouldn’t allow him and two younger brothers to come home until 25-years-old which allowed them time to work out what they wanted to do. All are farming.

David used the time to complete a Lincoln University farm management diploma and travelled overseas for several years before coming home in 2009.

David fully supports Environment Southland’s land and water plan as it stands. He is annoyed at the compliance costs associated with the Government’s freshwater proposals and targets.

“Riparian planting would be thrown out the window.”

He feels sorry for the Environment Southland staff as they have put in a lot of effort in consulting with farmers on the land and water plan. The staff have built a good rapport with farmers.