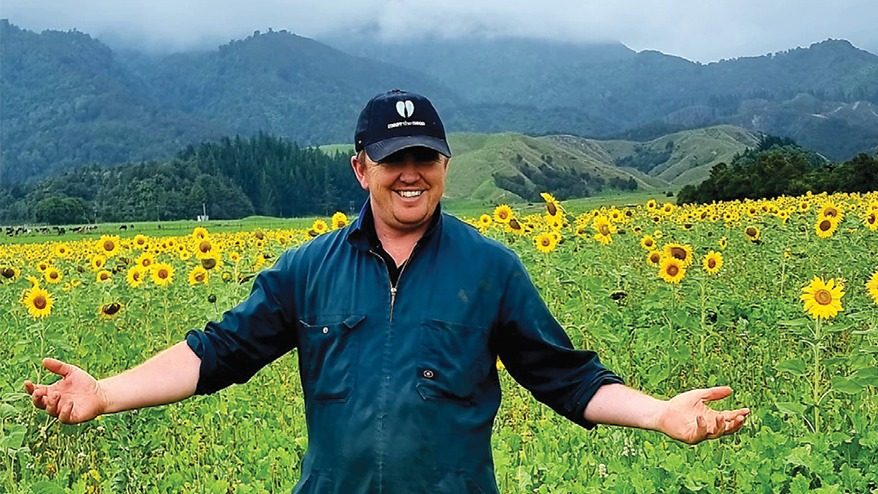 While the vocal minority are decrying farmers and causing angst in the farming community, Anne Hardie found it is a small minority and the majority are happy to engage with farmers – they just need to be invited.

A couple of kilograms of sunflower seeds in the summer crop can work a treat to help farmers engage with their local community.

When Wayne and Tyler Langford posted a photo on a Golden Bay community facebook page of the sunflowers blooming in their crop, 1,000 people liked the photo – nearly a third of the community’s population. When they posted an invite to the public to head to the farm for photos in the sunflowers and watch the cows head in for milking, more than 50 people turned up.

“We said who wants to come and shift our cows on Saturday?” says Wayne Langford who is Meat the Need co-founder and also Federated Farmers’ dairy chairperson. “They came and went in an hour and we were able to engage with so many people and tell a good story. It’s much easier than people think.”

The dairy industry’s contribution to the economy through the early stages of Covid created a halo effect that was welcomed by farmers. Some feel that is waning now the talk has returned to environmental regulations, but DairyNZ’s chief executive Dr Tim Mackle says the organisation’s surveys show the public still looks favourably on the industry.

For the past 12 years, DairyNZ has carried out quarterly surveys of 750 people in the general population and though the industry probably peaked in the favourability stakes around 2010, the latest survey shows 61% of New Zealanders have a favourable view of the dairy sector and 63% have a favourable view of dairy farmers. The bulk of the remaining 37% had a neutral view and those with a negative view made up a small percentage of the population.

90% of respondents agreed that the dairy industry contributed strongly to the New Zealand economy.

Mackle says there is no evidence that the industry is losing positivity and like so many issues, it is the detractors that make the headlines who are a minority of the population.

“We have work to do, no doubt about that. But I think it’s a lot more positive than people think.”

The Langfords took the bull by the horns three years ago after a water conservation order was placed on nearby Te Waikoropupu Springs and its associated water bodies. They decided that rather than be a target in their very green community, they would invite the community to be a part of their farm management team. They asked their community what their farm should look like by 2030 and how they saw that happening.

It resulted in 20 people joining their Farming 2030 group where they open not just their farm gates, but their books as well so the group understood the financial implications of decisions they were making. Since then, the group has held field days on the farm with hundreds showing up, plus planting days or simply taking photos of the sunflowers. As part of a wider sustainability workshop, they talked to the community about what the group was doing and had a wider conversation about how their farming business could be more sustainable.

“When the community has that conversation, farming has to be part of it.”

The Farming 2030 group was also a way of involving the enormous expertise that existed in the local community and Langford says every one of the group members has had something to offer. That expertise was a resource they could use on the farm rather than trying to create an environmentally sustainable business on their own.

They discovered those who joined the group were excited about learning new things and positive about what they trying to achieve. A couple of them simply wanted to be heard and Langford says they had been listening to information within their own circle and were amazed at how different it was on the farm compared to how they had previously perceived it. Some left the group when they realised how long it took to make change on a farm and yet Langford says even after three years, they are really only just getting started.

“We’ve opened up our business. We don’t have anything to hide and admit we’re not perfect and have areas to work on. It’s working and evolving all the time.

“As a farming leader I can talk until I’m blue in the face and aren’t heard. But if the group can go back and talk about it, they can translate it to the audience they are talking to. It’s pretty rewarding when you go to a café and the woman behind the counter says I love what you are doing on your farm – it’s pretty cool. For some reason, the story of what we are doing on our farm resonates with people.”

He says public sentiment toward dairying and dairy farmers has definitely improved since Covid but is going through a “little tough spot” now as the industry works through the climate space. He puts that down to misunderstanding and the need to get the message right.

When people don’t understand how dairy farmers are farming and form a negative view of the industry, they can be angry and emotional when they confront farmers.

“If someone is talking to you from their heart, talk back to them from your heart.

If they’re talking from their head and using data, then talk back to them from your head – facts and figures.”

Langford says there is massive support for farming but the public often doesn’t know how New Zealand farmers are actually farming. He would like to see more farmers open their gates and let people see what they are doing on their farms.

“Some of the anti-farming movement is almost like a church or rugby club and if you were asking them to come from their rugby club to your rugby club, you have to give them real reasons to do that.”

Open Farms and Fonterra’s Open Gates days have been a good way to invite the public onto farms, though he would like to see more commercial dairy farms involved in Open Farms.

Mackle says DairyNZ needs to supply farmers with more facts and figures about the industry so they have the information to talk with their local communities, because it is important to have their support.

Just like the All Blacks, the dairy industry needs support from fellow New Zealanders to compete in the world market and the public has a big impact on decision-makers.

While it is important for business, it is also important to farmers, with DairyNZ’s farmer surveys listing public advocacy as one of the top three factors for spending their levy.

In the quarterly surveys of the general population, the two main factors that interest them in farming are the environment, followed by animal welfare.

Mackie says New Zealand dairy farmers know they are arguably the world’s best, but there’s a big chunk of the population who don’t know that and the industry has to find ways to connect with that silent majority that sit in the middle of the bell curve.

He says they may not be the influencers, but that’s where the political vote matters.

DairyNZ’s ‘Here for the Long Game’ campaign is aimed at helping New Zealanders better understand and connect with dairy farmers. Part of that is setting up stories between media and farmers to tell their story to Kiwis who are busy with their own lives and don’t have the time to make long-term views.

Farmers are increasingly telling their story on social media and he says that has been a good way of portraying the people in the industry and the emotion that is attached to their stories, which is every bit as important as telling the facts.

Though farmers often hear the negative dairy farming stories, he says part of that is they are simply sensitised to hearing those stories.

The organisation monitors the media every month and the negative stories range between seven and eight percent.

“We tend to see those stories and don’t see all the positive stories.”

Though there is a lot of noise out there at the moment, he personally thinks there is a growing awareness in the wider community about the importance of the dairy industry.

“But we always have to up the ante. It’s a collective thing.”