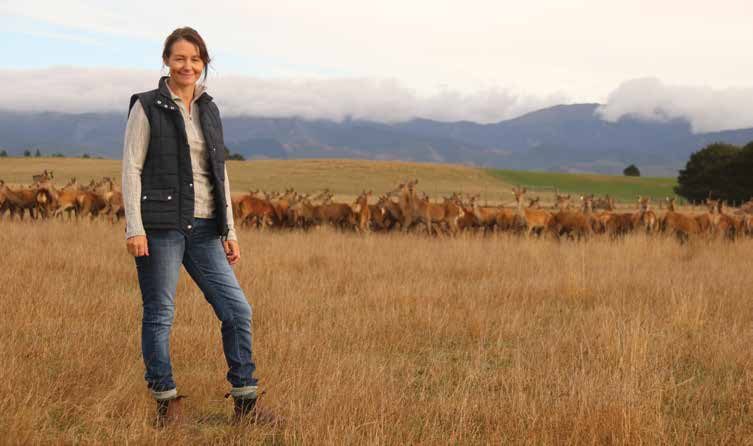 It isn’t the ideal time to step up to an industry governance role given the global disruption and turmoil created by Covid-19, she says.

“There’s a lot of uncertainty but the deer industry is not alone. The obvious challenge is trying to predict what the future will be like.”

But an unexpected spin-off from the pandemic could be a change in attitude towards agriculture.

“Other sectors have come to a stand-still, but agriculture has kept going so it could be that people start see farming as a more stable career choice.”

Encouraging the next generation to become involved in deer farming is one area she is keen to keep driving. The deer industry had some good initiatives in place such as the Next Generation programme but perhaps that could be built on with development of a clearer career pathway like the dairy industry.

“That would be a fantastic step, but it would need the buy-in and support of farmers.”

A big plus for the deer industry was the collaborative working relationship of farmers, processors and Deer Industry New Zealand.

“We have a great networking system, and a lot of readily accessible information to draw on and it’s something that the industry should be proud of.”

Aside from the challenge of a new governance role, a more pressing issue is the winter feeding of deer. She is involved in the running of two mixed livestock farms Jedburgh, with husband and vet Richard Hilson: and Clovelly with sister Michelle.

On both farms weaners usually graze on saved pasture with a top-up of maize through late  autumn and winter, but that option has all but dried up with the absence of rain since October reducing rainfall to about one-third of the usual 12-month average.

“There’s no feed locally to buy in so we’ve had to feed palm kernel to weaners… we desperately need rain.”

However, a 14 hectare crop of Kestrel kale (3ha at Jedburgh and 11ha at Clovelly) will maintain hinds from early July until the beginning of September. Kestrel has been the winter mainstay for hinds since 2009 because it yields consistently and is cheap to grow. Keeping the hinds on kale also frees up paddocks for the weaners. They’re rotated around paddocks which has the added advantage of helping control internal parasites.

It’s a simple system. The start date of feeding is based on crop testing in mid-April to assess the total drymatter on hand. That amount is divided by the per hind daily feed allowance of 2.5kg/head and worked back from August 30 to get the starting date.

The hinds are given weekly breaks and topped up with either balage or silage.

At Jedburgh it costs about 6c/kg/dm to grow, and usually yields about 12 tonnes/ha.

The Kale is part of a three-year rotation into new pasture. This year’s crop at Clovelly followed old pasture and will be followed with plantain before going into grass in 18 months’ time.

Kale is a cost-effective and simple system that they’ll stick with, Karen says.

“It’s never failed and its why we keep growing it.”