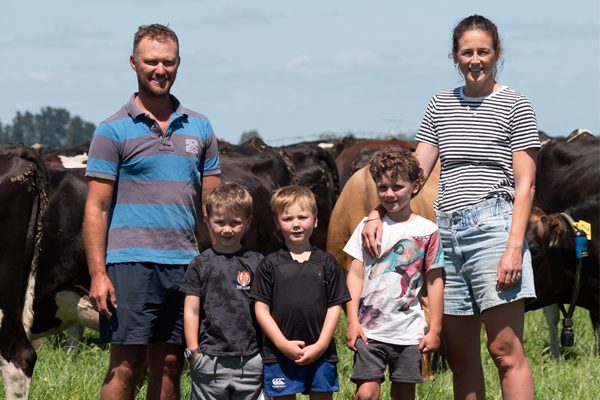 The Woodhouse family are investing in their irrigation, and improving water use efficiency to maintain productivity in the face of ever-tightening nutrient regulations.

Ben and Gina Woodhouse farm Timata, a 175-hectare, 650-cow property near Carew in Mid-Canterbury together with Ben’s parents Hamish and Boo.

About 46ha of the farm was previously leased to neighbouring Kintore Farm while the remainder was bought and converted to dairying in 2012.

Hamish and Boo had been among the original shareholders in the Kintore conversion and when they sold out of the equity partnership, they retained their 46ha with the original homestead.

It’s now home to Ben and Gina and their three children Harry, 7, Jack, 5 and Olivia, 2.

While Hamish and Boo are now living in nearby Arundel, they’re still active in the farm business and Hamish can be found most days either working on the dairy farm or at the nearby 155ha, dryland support block leased 18-months ago.

Ben recalls the early years of borderdyke irrigation on the home farm with remnants of the original canvas gates still to be found.

While a centrepivot had been installed on the 46ha when the land was leased to Kintore, irrigation on the neighbouring land they bought in 2012 was 90% borderdyke and 10% dryland.

It was all hands to the pump during the conversion of Timata with both couples hands-on in the work to get the farm ready to take the first intake of cows and be ready for milking when the 50-bail rotary dairy was completed just before Christmas of the 2012-13 season.

Ben is a Lincoln University graduate with a Bachelor of Agricultural Commerce and Gina is a qualified primary school teacher.

Originally from Christchurch she became a dab hand at tractor driving to help get the conversion finished in time.

Ben had travelled extensively after completing his degree and had then been working as a shepherd at Inverary Station in the Canterbury foothills.

“Dad and I wanted to farm together and to do that with sheep and beef we would have needed a much bigger place and that didn’t stack up – so dairying it was,” Ben says.

Once that decision was made, he took on a dairying job nearby to start learning the ropes and then spent the calving of the 2012-13 season working on another nearby dairy farm.

A centrepivot was installed to water 82ha of the borderdyke area with 21ha watered by a big gun irrigator and the remaining 8ha covered by K-line. The K-line area is scattered around the farm – mostly in the corners where the pivots don’t reach. The irrigation setup has worked reasonably well over the years but pressure in the form of nutrient restrictions coupled with the labour demands of the system mean they are in the process of replacing the five runs covered by the big gun with two wiper pivots.

The plan is to replace the K-Line with fixed grid sprinklers – likely later this year.

“The environmental aspect is always on your mind because the gun puts on a lot of water in a short time – about 50mm at a time – so it’s harder to manage nutrient loss.

“It’s on a nine-day return and in times when you have rain forecast but you’re not sure it will eventuate you’re struggling with knowing if you irrigate and the rain comes that’s going to be too much water in the soil profile.

“But if the rain doesn’t come and you haven’t watered then you’re going to be dry before you can get back round again.”

The K-line is on a five-day return so the situation can be similar, he says. 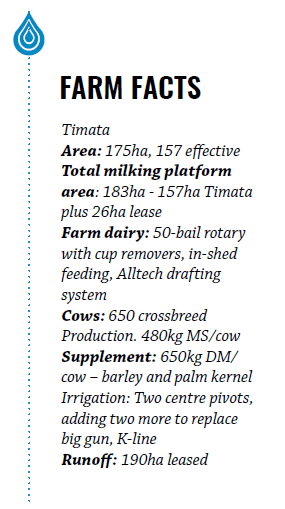 “A big factor in the decision to upgrade is to try and get as much efficiency out of the irrigation as we can so we’re maximising our pasture production.”

The 190kg/ha nitrogen rule already in place and regulations for the Hinds Plains zone that require nitrate leaching reductions of 15% by 2025, 25% by 2030 and 36% by 2035 are likely to have an impact on pasture production and productivity.

“By upgrading the irrigation we’ll be able to put smaller amounts of water on more frequently so we’ll leach less of the nitrogen we do put on.”

That’s good for the environment and good for productivity.

“There’s plenty of research out there showing it’s much easier to put on what the plant needs when it needs it.”

“We’re not trying to increase production or cow numbers – we’re just trying to be more efficient with the same area and the same amount of water.

“What we’re aiming for is that even with nutrient limits we’ll still grow the same amount of grass so by putting the water on more efficiently we’ll counteract the drop in nitrogen input.”

The two new pivots are currently being installed – Ben had hoped to have them up and running by October but supply issues have delayed that. It’s put more pressure on Ben this season because, thinking they’d be installed by the start of the irrigation season, he hadn’t trained his two staff to shift the gun.

“That labour requirement is another reason for the change – none of the runs are the same so setting them up isn’t straightforward.

“It’s not overly complicated but it’s just another thing you have to train people to do and this year we had a new team.”

There’s a reasonably high level of repairs and maintenance (R&M) required on the gun, a tractor is needed to shift it, there are just more things that can go wrong and it’s time consuming.

The cost benefit of replacing the gun with the pivots stacks up easily but the proposition for the replacing the K-line with fixed grid sprinklers is harder to justify.

“We’ll probably go ahead with it anyway for the same reason as the pivots – especially the labour aspect – it takes about an hour and a half each day for someone.

“We have a Rav4 set up with an attachment on the front so we can move them but the K-lines are in all four corners of the farm so someone has to drive right around each day shifting lines.

“It’s heavy on R&M too so the reasons to do it are the same as the pivots but the difference is the fixed grid is expensive to put in.”

The fixed grid system has sprinklers set atop posts set out in a grid pattern so that water from each sprinkler is evenly applied across the whole area.

Each sprinkler within the grid can be turned on and off separately and they’re set up so a certain number are on at any one time to maintain good pressure and control rates of application.

The farm’s water is supplied by MHV Water with irrigation water arriving on the farm via an open race. The main race is diverted into the farm and a turbine has been fitted at a step-down point in the race. As the water drops down, it turns a turbine which mechanically operates the in-line water pump. It sends water out to the farm at up to 60psi which is enough pressure for all of the pivots to function well. It will also be ample pressure to operate the fixed grid.

Ben says upgrades to the MHV Water scheme have also allowed them to manage water better and make the most of the allocation they get.

A 45,000 cubic metre storage pond was built when Timata was converted but MHV Water has put in automated storage pond level sensors allowing Ben and scheme operators to see the pond level online.

Good grazing management is the other part of the pasture productivity equation and a real focus on the farm. They use a tow-behind pasture meter and ride the farm weekly to record the level of drymatter available in each paddock.

The data is run through Agrinet pasture software to give a feed wedge.

Mario Vasquez is Ben’s assistant farm manager and is responsible for pasture management and milking on a day-to-day basis.

“He’s really capable and has it covered but we catch up most days and having the information online each week means I can see what’s happening at a glance.”

Ben says the aim is to maximise quality and hitting residuals is key to that.

They will mow behind cows when needed to achieve that, he says.

They’ve invested in Allflex collars for the cows and drafting system in the farm dairy and Ben’s pleased with the information the technology gives him as well as the benefits it’s given to managing the herd.