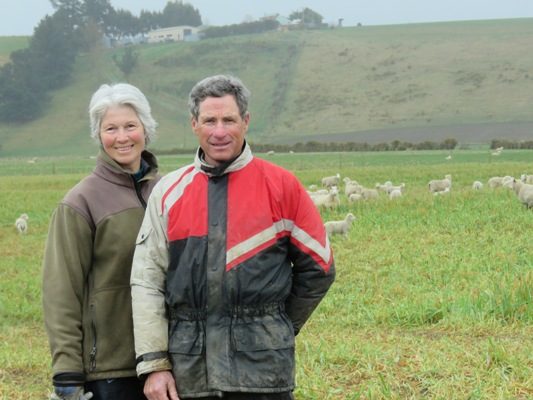 Three years ago more than a decade’s development of easy-care sheep at Winchmore, Canterbury, came to an end with a dispersal sale at Tinwald. Andrew Swallow caught up with some breeders who are continuing what Agresearch’s David Scobie started.

Cost savings and price premiums in future are among the goals given by farmers taking up where Agresearch left off with an easy-care sheep breeding experiment.

The Crown Research Institute pulled the pin on the 1997-instigated project in 2014 with a dispersal sale of the 300 sheep involved at Tinwald, Canterbury.

Earlier this winter at a Beef +Lamb New Zealand seminar the project’s leader David Scobie bemoaned the lack of uptake of the short-tail, bare-breach genetics he’d developed, so <itals>Country-Wide<end itals> set about finding out what happened to them.

It turns out several well-known stud breeders and some purely commercial farmers are not only maintaining the Scobie lines, but expanding them. In some cases that’s with a view to integrating the traits into current commercial breeds, while others aim to expand the lines as a ‘breed’ in themselves.

“The biggest thing is they are easy-care,” South Canterbury farmer Evan Cartwright says. He bought a line of 20 of the Scobie ewes and one ram at the Tinwald sale.

“They need a lot less chemical input and handling which is what the world market is asking for.”

In three years he’s built the line he bought into a mob of 80 ewes, with two rams now running with them. The only drench used is a single shot at weaning for ewe lambs destined to be retained for breeding.

In contrast, his near 900-head flock of Romney ewes get a dual-active drench at crutching in October while the lambs – Romney and Romney x Dorset Down – get a pre-weaning drench and monthly doses thereafter.

It’s a similar story with vaccinations. The “research sheep”, as Cartwright calls his Scobie flock, don’t get any but the Romney ewes get a Toxovax and Campy4 while the lambs get a 5-in-1 clostridial with selenium.

‘We don’t get them in for tailing so we don’t really know yet but there are plenty of lambs out there.’

Despite the lower inputs the Scobie flock suffer fewer losses.

“We haven’t had to take any ewes out of the research sheep yet. They’re pretty hardy.”

Cartwright takes an easy-care approach to mating the Scobie sheep too, leaving rams with them year-round. Lambing’s got earlier each year he’s had them, this year all ewes delivering in June with what he estimates to be comfortably over a 150% drop.

“We don’t get them in for tailing so we don’t really know yet but there are plenty of lambs out there,” he said at the end of August.

From the 80 ewes, only four lambs were lost and one ewe was assisted.

He’s yet to compare meat yield of the Scobie lambs with his Romneys but his perception is they kill-out and yield better.

“The meat yield is the issue with the Romney, which is why we’re looking at using a Tefrom across them to increase the milk with the East Friesian part of the Tefrom, and the muscling with the Texel element.”

His Romneys do produce nearly double the wool the Scobie ewes do but lower micron – two samples selected to represent the extremes of type tested 29 and 37 micron respectively – and high lustre means the Scobie wool’s probably worth 50c/kg more.

“We’ve been told we need to sell it as high-lustre hogget wool. They do still need shearing but it’s really just for animal health: last year a couple did get flystrike but it was a wet summer.”

While wool’s not Cartwright’s focus with the Scobie sheep, it is for Charles Douglas-Clifford.

“We’re trying to put the wool back on them but only in the right places,” the large-scale half-bred breeder says from Stonyhurst, on the North Canterbury coast.

Having bought about 25 ewes and one ram at the Tinwald sale, they now have a flock of about 200 pure and first-cross Scobie ewes which Douglas-Clifford calls his “pretties”.

“We want to keep enough pure so we can keep going back to them if we need to.”

Reducing dags and, longer-term, possibly producing a sheep that doesn’t need tailing, is the aim.

“I believe there will be markets and premiums for stock from farms that don’t tail in the future. Animal welfare issues are only going to increase as we go forward and they’re going to be a huge disruptive factor in our farming. You can either ignore that, or acknowledge and embrace it.”

Besides its 10,000 traditional half-bred ewes, Stonyhurst is home to the nucleus stud of the Southern Cross breeding project with Merino NZ and five other breeders. The “pretties” haven’t been used with these yet but they are considering using them in their own stud flocks.

“We want a bit of both: the bare breach and the short tail. The two seem to come a bit hand-in-hand.”

He’s also looking at using “the pretties” as a pathway to boosting fertility in the fine-wool flocks. To date the Scobie ewes have tailed 170-180% and this year’s purebred two-tooths scanned 188% despite being only 48kg at end of mating, a legacy of a two-year drought that had gripped the region.

“They’re incredibly good mothers and in four years we’ve only had about two dries.”

Despite that existing fertility, a Finn ram was used last autumn, the aim being to produce more carriers of the GDF9 fertility gene.

Douglas-Clifford says the “scary part” of that is some ewes were already carrying GDF9, so ewe lambs could carry two copies and be excessively fertile. However, the aim is to produce ram lambs with the double GDF9 profile which can then be used to introduce GDF9 into groups of stock without a trace of it.

“We’ve been playing with GDF9 for a couple of years in another side of our breeding programme putting a Texel composite over the halfbred.”

While the Cartwrights and the Douglas-Cliffords are both in Canterbury, some of the Scobie flock went much further from their original home at Winchmore.

Morrison Farming, a two-farm, 17,000 stock unit stud and commercial operation in Rangitikei, bought a dozen or so rams at the Tinwald sale.

“We were already pursuing a similar concept as David Scobie with our Ezicare and Wiltshire sheep, only with slightly different ingredients, Will Morrison recalls.

“Our focus hadn’t been so much about the short tail as breeding productive sheep with no dags and a bare belly and crutch that would suit once-a-year shearing.”

Ezicare is a Texel, Wiltshire and Coopworth-based composite developed by Morrison Farming over the past 30 years.

Following a debate around the Morrison Farming board table about how to use the Scobie rams, they decided to put them across their Ezicare hoggets for a couple of years to produce first-cross ewes.

“By doing it that way we could easily keep a track on what they were bringing in without having to have a complex EID programme,” Will says.

“As expected, there was a big range in the progeny from normal tails to very, very short.”

He’s now confident a flock of sheep with tails so short no docking is required could be produced in two or three generations if there was the demand.

As it is, they only dock now due to store lamb buyers’ reluctance to take on lambs with tails, no matter how clean or short.

“All the lambs are bare-breach and we do next to no dagging.”

For a couple of years they left all singles’ tails intact as most went straight to the works but growing demand for Ezicare breeding stock means single ewe lambs will be docked this year.

As the chair of Beef +Lamb NZ’s Farmer Council, Morrison says the easy care concept and what’s become of the Scobie flock is something they are discussing with B&LNZ Genetics with a view to a possible nationwide breeding programme and progeny test.

The AgResearch flyer for the 2014 dispersal sale of the Winchmore flock noted that in 1997 it was predicted the cost of growing wool would come to exceed the value of the wool grown. Two things could be done: breed sheep that cost less to run or give up on wool and breed wool-less sheep.

The resulting blueprint was a sheep with no wool on the head, legs, belly or breech with a genetically short tail in order to reduce dags, flystrike and labour for crutching, belly crutching and tailing/docking. No tailing would also avoid stressing lambs at a vital growth period.

The foundation flock came from short-tailed Finnish Landrace put to Border Leicesters and Cheviots, with East Friesian genetics added for bare breeches and tail, plus occasional inputs from animals exceptional in the desired traits but from other breeds.

The flyer said bare backsides are 33% heritable, and short tails 70%. Bare bellies are 30% heritable but cannot easily be selected until the animal is a two-tooth so progress with that trait is slower. It also noted 2007 and 2008 B+LNZ-funded research with ram breeders found ewes with less breech and belly wool weaned more lambs, and lambs without wool in these areas were heavier at weaning.

“When lambs are not using protein and energy to grow wool, they can use it to gain weight and fight off parasites,” it stated.

David Scobie says it is pleasing the Winchmore work is gradually being put to good use commercially, though with more research and/or extension investment, not to mention farmer uptake, it might have gone further, faster, and be starting to save sheep farmers nationwide substantial sums in animal health and labour, while improving the industry’s animal welfare profile.

The wool sector in particular has suffered from lack of research investment since the demise of the wool levy in 2009, he believes. That, and the sector’s reluctance to change, is largely why farmer returns for the fibre continue to spiral down.

“Builders use rechargeable drills all day and Tesla have battery-powered sports cars so why do we still shear with an electric engine in overhead gear that would power a small car?”

Another idea that’s not even made it to the drawing board is a wool-press the size of a shipping container.

“I’ve always been into new ideas but new ideas starve without investment.”