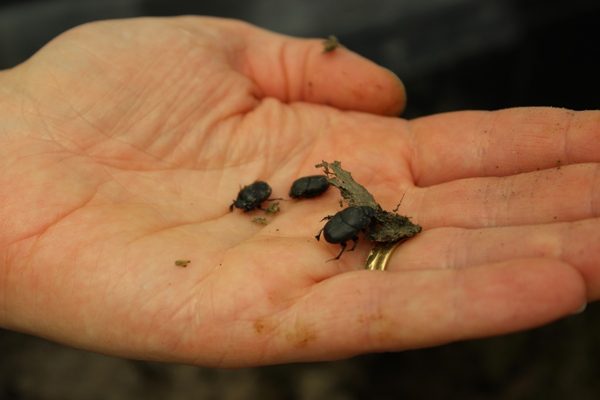 Dung beetles are spreading throughout New Zealand after their introduction was approved by the Environmental Risk Management Authority (ERMA) in 2011, or at least that is what University of Otago PhD student Emma Curtin is hoping to find.

Farmers have been able to buy several species of the hard-working insects from Auckland company Dung Beetle Innovations for the past few years and more than 30 farms in the South Island and many more in the North Island have so far given them homes.

NZ has its own native dung beetles but they only live in the bush which is why 11 species of the beetles from Europe, Central America and Southern Africa, which thrive on cattle and sheep manure, have been approved for importation.

‘Because they are bringing dung down from the surface into the soil, then that dung is where it can be better accessed by plant roots.’

Of the 11 species, only a few have so far been introduced and the hope is these tiny insects will decrease nitrogen leaching, improve soil structure, make nutrients more available to plants and decrease parasites reducing the need for drenching stock.

Dung beetles, depending on the species and the climate where they are, live between six weeks and a year. They dig tunnels in the soil while burying manure balls which they have brought down with them from the surface. The female lays an egg in these manure balls and when the egg hatches the larvae eats about a quarter of the dung before it pupates and finally emerges above the soil as a beetle.

Their tunnelling and bringing down their dung balls decreases soil compaction, and improves soil macroporosity, so soils are able to hold more moisture.

This causes less runoff of nitrogen, other nutrients and E.coli into waterways.

Curtin says she wants to hear from farmers who have bought colonies of dung beetles to see if they have established on their farms.

“Ideally in Southland and Otago, as I’m based at the university in Dunedin and my dung beetle colonies are nearby at Invermay,” she says.

Until farmers are familiar with dung beetles they may not readily recognise them, as they look like many other beetle species particularly when they are grubs. But signs of their activity under cow pats are distinctive.

However, she says it is important for farmers not to confuse the beetle’s tunnelling as grass grub activity.

Reducing or stopping drenching, or having quarantine pastures, is recommended for farmers introducing dung beetles.

Part of Curtin’s research will be to see if dung beetles also reduce nematodes in cattle, to reduce the need to drench.

“If we find less parasite eggs in the dung on farms where there are beetles, then that will be really interesting,” she says.

“I think these beetles are fascinating.”

Her supervisors for her PhD include AgResearch principal scientist Barbara Barratt, based at Invermay, as well as Prof Phil Bishop and Dr Jenny Jandt from the University of Otago’s Zoology Department.

Co-founding director of Dung Beetle Innovations Dr Shaun Forgie is also a supervisor and supplied Curtin with her initial colonies of beetles.

Dung beetles do not eat anything but dung. Grasses and clovers should benefit from them being in the environment, Curtin says.

“Because they are bringing dung down from the surface into the soil, then that dung is where it can be better accessed by plant roots.”

Their predators are hedgehogs and birds such as magpies.

Barratt says an attempt to bring new species of dung beetles into the country in the 1980s was stopped by the then Ministry of Agricultural and Forestry (MAF) as some scientists thought the beetle would harm earthworms which at the time were trying to be established in some agricultural areas.

She says that thinking had since changed and it is now believed dung beetles would complement earthworm activity by increasing soil organic matter and decreasing compaction.

“Worm activity reduces significantly in dry areas and in warmer temperatures and this is when the dung beetles are more active,” Barratt says.

As well, since the 1980s, there is a greater understanding of the need for soils to hold nitrogen instead of it leaching into waterways.

“The dung beetle increases the porosity of soil so the soil can hold more moisture and so more nitrogen,” Barratt says.

It’s thought dung beetles will spread about a kilometre a year from initial release sites, another part of the puzzle Curtin hopes to investigate, so farmers wanting their own colonies should probably not wait for the neighbours to get involved.

The adult beetles can fly but she is not sure if they would follow a herd of cows around a farm on its rotation.

“They do like fresh poo so maybe they do. We just don’t know but I’m hoping to find out.” 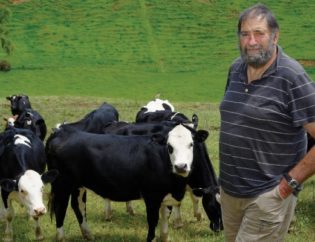