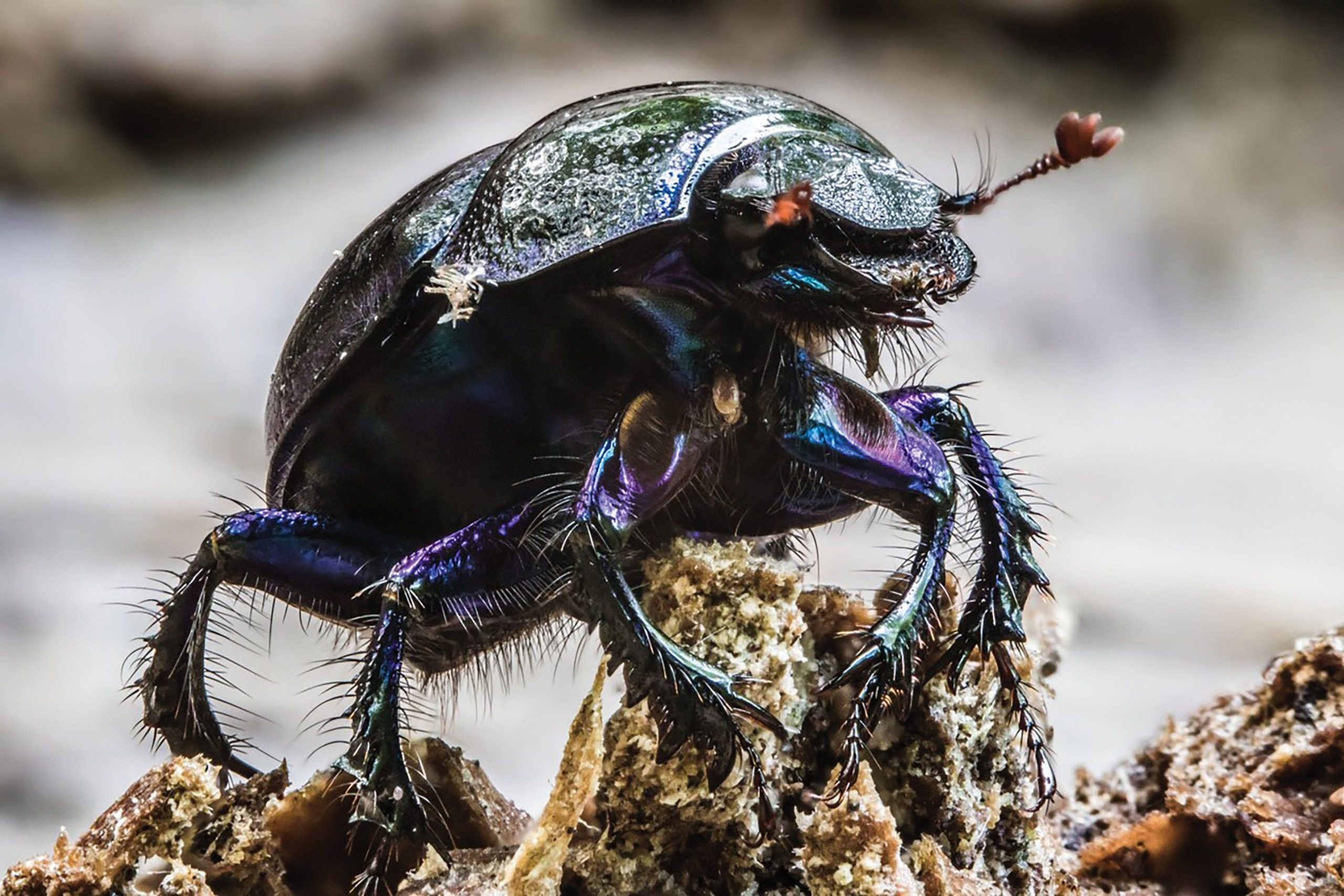 ‘Janitors’ of the insect world can clean up waterways and pastures, finds Elaine Fisher.

Insects revered by the ancient Egyptians could gain celebrity status in New Zealand if enough of them – millions in fact – are given the opportunity to help clean up our environment, waterways and pastures.

Egyptians credited the dung beetle (Scarabaeus sacer) with rolling the disk of the morning sun over the eastern horizon to begin each new day. Despite its godlike status, this family of beetles has a lifestyle many people find unsavoury because they harvest, eat and lay their eggs in dung.

These of course are the very qualities which make them ideal for the task of solving some of pastoral farming’s biggest issues, clean water and sustainability of pastoral soils.

“When we introduced livestock and grasses to New Zealand around 150 years ago, we forgot to bring in the janitors, the dung beetles,” says Andrew Barber, committed dung beetle enthusiast and managing director of Dung Beetle Innovations (DBI).

“Every year more than 100 million tonnes of cattle, sheep and horse dung pile up on pastures. The run-off is steadily degrading our waterways, while the residual mess is infecting our animals and impoverishing our pastures. “Dung beetles offer a remarkable natural sustainable solution to revitalise our soils and pastures and can rehabilitate New Zealand’s waterways in as little as 23 years – if we act now.”

And, thanks to campaigning by farmers and scientists, 11 years of research, public consultation and environmental scrutiny, dung beetles are here, ready to get to work.

So far, DBI has released just over half a million dung beetles in 1200 colonies on farms throughout the country. As much as those sound like big numbers it is a small start and Andrew is encouraging more farmers to add dung beetles to their “livestock”.

John Vosper of Jersey Girl Organics at Matamata is one farmer who has done just that. In 2017 he released dung beetles on the family’s 85ha farm, where 220 cows are milked. It was something of a leap of faith. John had listened to an address from Dung Beetle Innovations at a Beef + Lamb NZ seminar and bought the beetles there and then. He understood it would take time for the insects to make an impact, but the wait was a little worrying.

“For the first couple of years I saw virtually no signs of their activity and then, from patches of disturbed soil next to manure spots, saw some evidence that they were working.

“This year it’s quite exciting because the evidence is all over the place and I’ve seen some flying. They were released near the front of the farm but now they are from the front paddock to the back paddock, a distance of about 1.54 km. My staff think I’m crazy because I get so excited when I see beetles or evidence of them working.”

In addition to the beetles quickly cleaning up cow dung, burying it underground, enriching the soil, improving pasture and reducing nutrient runoff to water ways, John is also hoping the actions of the insects will help improve animal health.

“With the removal of dung, there should be fewer intestinal worms and another benefit is the reduction of flies in summer which I hope will reduce fly strike in our sheep.”

John’s optimism around fewer flies is legitimate. Blowflies associated with sheep flystrike do not breed in animal waste, but females use it as the nutrient source for maturing eggs. In NZ, other nuisance flies such as biting stable flies, house flies, and flesh flies are known to breed in livestock dung.

Since the first release, John has added more beetles to his farm and now has three species, including the quite large and impressive ‘paua beetle” (Geotrupes spiniger) so named because of its colouring.

“Different species are active at different times of the year and tunnel to different depths from 15 cm to 45 cm beneath the soil.”

John, who was a sustainable agricultural advisor for the Waikato Regional Council, now has a similar role with WSP – formerly Opus. He’s an advocate for council funding of dung beetle introduction to help mitigate climate change and enhance freshwater quality.

“Councils are happy to fund trees for riparian plantings which is great but one of the barriers to the introduction of dung beetles is that you can’t see immediately what they are doing.”

Andrew says DBI has had some success in working with councils to fund the release of beetles. “The Greater Wellington Regional Council and Marlborough District Council have carried out catchment releases, sharing the costs 50/50 with farmers. We are in talks with other councils to establish similar schemes.

“It’s madness for councils not to do so. An NZ scientific paper has shown up to an 80% reduction in overland flow of rainwater when dung beetles are present. With any form of waste mitigation, the further away from the source of the problem, the more expensive the clean-up becomes. The cheapest way to deal with dung is in the paddock, using beetles.

“A catchment approach, involving a number of neighbouring farms, is the best way to make a significant impact.”

Andrew, unashamedly a dung beetle fan, acknowledges they have an image problem. “I think some politicians are concerned they will get the mickey taken out of them if they promote dung beetles and releasing them doesn’t present the same kind of photo opportunity as planting trees with children does.”

The beetles also don’t meet the funding criteria for many environmental projects. “The application forms ask how many people will be involved.

With dung beetle releases that is hardly any. However, groups which have recently gained funding for trees and fencing, report not being able to find fencers or people to plant the trees. It would be great if some of that funding could be redirected to dung beetle releases.”

Dung beetles are found in every part of the world, except Antarctica. New Zealand’s native beetles have evolved to live in the bush, processing bird droppings, not in open pasture with massive amounts of livestock dung.

The introduced species pose no threat to native populations as they won’t colonise the bush, says Andrew.

“They won’t eat anything other than dung because they have sucking, not chewing, mouth parts.”

Nonetheless, gaining approval to import the insects was a long, arduous process. “New Zealand has the most stringent border security system in the world when it comes to introducing new bio-organisms. You quite simply can’t bring in anything which will have a negative effect.”

NZ is the last country in the world to approve the introduction of dung beetles. The push began in 2009 when a group of farmers formed the Dung Beetle Release Strategy Group. By 2011 the group received approval from the Environmental Risk Management Authority (now the EPA) for the importation of eleven species of dung beetle.

This was followed by importing and mass rearing, lots more research and talking to farmers. In 2013 the first dung beetles were released in New Zealand and by 2014 Dung Beetle Innovation was in operation, breeding and supplying beetles to farmers.

Shaun is an internationally recognised entomologist, with PhD and MSc (Hons) degrees specialising in dung beetle reproduction, ecology and evolution. In his previous role as a research scientist for Landcare Research, New Zealand’s foremost environmental research institute, he received a science excellence award for his key role in the Dung Beetle Project that ultimately led to DBI.

Today DBI has developed at Whenuapai, the largest dung beetle breeding facility in the world. There, seven different species of the beetles are separately raised on cow dung in one cubic metre, mesh covered bins.

“We collect the dung from a nearby dairy farm and use a front-end loader to move it around. We need to get on with it, move quickly and at a large scale if we hope to achieve our mission of rebalancing NZ’s pastoral farming systems for the next generation. Our goal is to be out of business within 20 years. Job done,” says Andrew.

When orders come in for the beetles, farmers are advised on which species will best suit their soil types and climates and from November to March, colonies of the insects are sent by courier to farms all over the country.

DBI has permission to import up to 11 different species of beetle, most of them coming via Australia, where they have been conditioned to Southern Hemisphere seasons. Previous to that they have been collected from the wild in Southern Africa, South-west Europe, the Mediterranean, Southern England.

To find out more visit: dungbeetles.co.nz