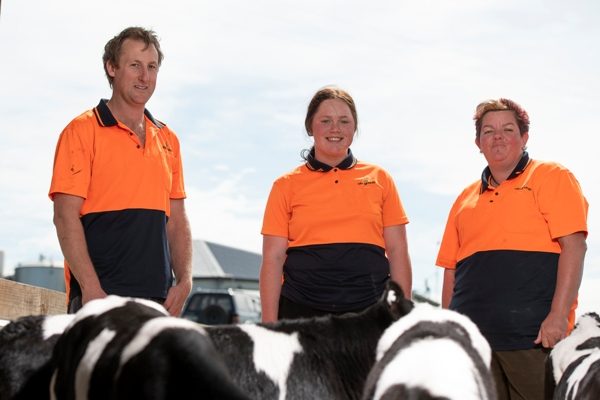 On Bella Archer’s first day at work as a dairy farm assistant, she learned how to ride a two-wheel motorbike, and rode around and around the tanker track until she had mastered it.

On her second day she learned to drive the tractor.

And on day three she learned how to bring the cows up to the dairy shed on the Santoft farm.

A town girl and school leaver, 18-year-old Bella was casting around for a career, having decided against her earlier idea of sports psychology, and decided farming was worth a try as she liked working outside.

The Santoft youngster had cupped a cow before, on a friends’ farm, but that was as far as her skillset went.

So she applied for a few jobs and then saw the Regents Park advertisement, working for the OB Group on the coastal strip by Santoft forest.

“The Regents Park job advertisement mentioned the opportunity to start an apprenticeship – so that sounded really good, a chance to get some qualifications and it made it more than just a job. There were prospects.

“I was really nervous about riding the motorbike – but it was actually quite fun.”

Bella was employed under the new Federated Farmers Dairy apprentice scheme, an initiative developed by the farmer lobby group and Primary ITO to grow people capability in the dairy industry.

The scheme has advantages for the apprentice, ensuring a supported environment with an employer who has signed into a Farm Charter and a training package from the ITO and more job security than just a regular job.

And for the farmer, the scheme marks them as a preferred employer, ensures extra support for their ongoing professional development in people management and encourages retention of staff for the length of the apprenticeship and hopefully beyond.

Bella was employed by the OB Group, on their Rangitikei Regents Park farm, milking 1250 cows on 530 hectares with twice-yearly calving with a split of 200 calving in the autumn and the rest in the spring.

‘She has been awesome – we wanted someone who was fresh and willing to learn and her doing the study makes her want to know more and contribute more.’

For the last four years the owners of OB Group which include John O’Brien, Steven Melville, Stu Taylor (and soon to be James Webb) have had a real focus on attracting high quality people to their properties.

They have introduced 5 & 2 rosters, an hourly rate for non-management staff and have created a team culture attracting and retaining a team of good and productive people, James said.

“We have a team of seven staff here and most of them prefer to live off the farm – we have got five houses but only three of the staff live on the property.”

Some travel from Palmerston North and Wanganui and James was pleased to attract Bella who lives locally at Santoft.

He is thrilled with the way Bella has taken to the job and the apprenticeship, saying for a girl who knew nothing she has embraced it and is soaking up the knowledge.

“She has been awesome – we wanted someone who was fresh and willing to learn and her doing the study makes her want to know more and contribute more.”

Bella appreciates the flexible work conditions and says she has no trouble getting up in the mornings – but she appreciates the fact that she gets a rostered sleep-in one day each week. She also likes the 5:2 roster getting either Friday /Saturday or Sunday/Monday off.

Starting on 40 hours and four days a week, she quickly moved to working five days, as she was getting bored at home. Fitting work in with life, she can leave early if she has something on, like the twilight netball league that starts up soon.

She has also enjoyed the Primary ITO Level 3 course she has just completed in nearby Feilding.

“I am really enjoying the work and am loving the course – it’s great to be able to come to work and relate what you have learned in class to what you are doing.”

For James, the apprenticeship fitted in well with the ethos of the OB Group, where employees are part of the farm community and are encouraged to upskill and grow to advance through the industry.

“From our perspective the apprentices are really great – they go off to courses, get involved and ask questions.

“We have a really flat management structure here, which means anyone can ask questions and make suggestions. And they come back with ideas and have an input, especially at the weekly meeting, it makes a good atmosphere.”

Apprentices don’t have to be new recruits, or particularly young. The only prerequisites are they must have completed the 90-day employment trial period, have covered off health and safety and vehicle training and have residency status.

Once Bella had fulfilled the 90-day period for the OB Group she started in to the apprenticeship programme joining fellow apprentice Yvonne Leigh, who has been working on Regents Park for the past two years. After 20 years in the workforce in a variety of roles, and having six children aged 19 to seven years old, 38-year-old Yvonne came to dairy farming after marrying a local farmer and working as a part-time milk harvester on the Regents Park block.

“Going into the apprenticeship scheme was scary at my age – I had never really thought about being an apprentice – I worried about ‘would I have enough time to finish it and would I have to pay for the training?’ – all sorts of things.

“I was really nervous about how much there was to learn and take in, I wasn’t very confident. But it’s been really good, as I have started to learn more and gone through the courses my confidence has grown. I am able to ask questions about the stuff I learn from the tutors and others at the course.”

The OB Group pay for the training for all staff and Yvonne is now studying Livestock Husbandry Level 3 which fits in well with her recent promotion to Animal Welfare Officer on the farm, with an accompanying pay rise.

“We want to promote the OB Group farms as employers of choice so we pay employees’ ITO training costs on the condition they pass, and we also put them through other courses like through the vet clinic, coaching and communications courses. And we try to appreciate their skills and encourage them to learn new things – that’s what so good about the Growth Conversations, you tease out what they could be interested in learning next.”

Yvonne loves working with the cows and James says she is really good at spotting any girls that are sick or needing extra attention (hence the promotion to animal welfare officer.) She also enjoys working around the shed, making sure things are working properly and doing maintenance jobs.

“There are no jobs that I hate – I just need more experience in running the effluent spreader and the bale feeder and I will feel more comfortable with those jobs,” Yvonne says.

“And the best thing I love is that here there are no work politics or dramas – working with cows you can come to work and enjoy it – not like in the supermarket or bakery where there were always people dramas.”

Having fun and enjoying good banter is at the core of the Regents Park culture, James says.

The team is focused on and striving to meet production targets (430,000 kg MS this season) and to continually improve the farm every season and its much more fun if they do that while enjoying working on the property and with each other.

“We try to have fun, good banter and a few get-togethers – like after calving. We have been bowling together, or to the greyhounds at Whanganui, just getting off farm as a team and having a few laughs.”

“If you can’t have a laugh, life is pretty boring,” Yvonne agrees.

Life is never boring with six children and one grandchild, who Yvonne cares for every second night, and she too appreciates the flexible conditions James runs and juggles the morning routine with her husband who heads out to milk at 6am.

With an apprenticeship and more experience under her belt, she can see her herself moving up to a 2IC role in the business. Others are also looking at the apprentice scheme, Filipino recruit Nick Besinga is working on getting residency so that he can hop on the scheme as well.

Social interaction with other apprentices

The OB Group use individual two-monthly Growth Conversations with each staff member to focus on personal and professional growth within the farm group.

The one-on-one catch-up is a great place to find out how the job is going, how they find the relationships with the business manager and other team members, talk about processes and systems, identify what the team member has learnt and what they want to learn next and where they want to progress.

They can also touch on personal issues, review whether the team are living by their values and talk about ways each party can improve. Concrete goals are set out of the conversations, and then reviewed in the following meeting.

Business manager James Webb says they could be simple things brought to light, like identifying what they want to learn next.

Mirroring the opportunities offered by large corporate employers, the OB group has recently set established a graduate position to attract a university graduate to the group.

Offering onfarm accommodation and exposing them to working on each of the three farms for four months, James Webb says the plan is to pay them well, treat them well and put them through management courses and upskilling in the hope that they stay around, or at least come back to the group.

“It’s a good way to get our name out there as good employers.”