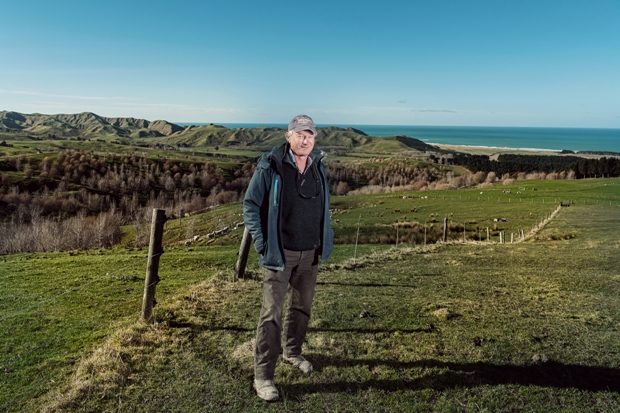 A rural community’s support is too valuable an asset to lose to carbon forestry.

When his wife Jane died in a car accident in April this year, the community rallied around him and helped him get through the tragedy.

“I didn’t get that from a block of pine trees.”

James is concerned the human factor is not being considered when communities are depopulated by farms being sold to be blanket planted in pine forests for carbon credits.

He says the support from a rural community is beyond what people in urban areas understand.

When Jane’s body was brought back to the farm the locals sang a waiata as it entered the house. The locals made sure his house was well-stocked with provisions including the simple things like dishwashing liquid and loo paper. The freezer is still full of donated meals.

One local farmer was looking forward to tucking into a cold roast, saved in his fridge only to find his wife had given it away to James.

“I’m in danger of getting fat,” James says.

Jane was Canadian and they married 13 years ago. She loved the open space farming offered. James says she was appalled by the blanket planting of pine forests.

James (57) farms mainly sheep on 660 hectares (553ha effective) at Porangahau. The farm is named Rangitoto after the pa site on the farm.

It is a top finisher of lambs all-year-round to Lean Meats. In 2016 he and Jane were named Supplier of the Year at the New Zealand Sheep Industry awards.

Though it is an intensive finishing operation there has been a strong focus on the environment. In 2012 the Hunters were the Ballance Farm Environment Awards East Coast Supreme winner.

They have also developed wetlands and protected native bush.

James started using QII covenants 21 years ago and 8% of the farm is covenanted.

The 9ha of wetlands which are all man-made, have native grasses planted to filter out sediments and to avoid losses. The water leaving the farm is clear, running into brown streams.

However, his efforts won’t be recognised by the government because it focused on gross, not net, emissions.

Methane is measured as a gross emission, rather than as a net to the atmosphere. This does not allow for the fact that past methane emissions are breaking down.

If methane was measured on a net rather than gross basis, it would be considerably smaller.

James believes the farm is sequestering twice the carbon it is emitting but farmers are not allowed to calculate net emissions. He says farmers like him shouldn’t be penalised.

The zero carbon bill also proposes to collect the levy at processors, not on farms. So no matter what James and other farmers do to make their farms’ emissions neutral they are still levied.

James says the “95% free allocation” to farming is misleading. Farmers with pre-1990 bush will not be able to use this as these areas have been thrown into the Kyoto numbers.

As well as the loss of community, James is also concerned at the loss of biodiversity. A pastoral farm is teeming with biodiversity but this seems to have been forgotten with the blanket planting of pine trees.

“Biodiversity is not a block of just bush but insects, wildlife, plants and soils on a farm.”

The farm is home to giant weta, native orchids and the endangered bird, the bittern, to name a few.

James says forestry on its own it not as good as people make out when worked out on net present values due to the upfront costs. It is a different story with carbon units.

James says $500/ha of gross farm income with a multiplier of seven would add $3500/ha every year to the NZ economy. There is not the same economic activity with forestry.

James is annoyed foreign companies are cashing in on carbon forestry.

“If the forests have gone offshore then it strikes me as a relatively dumb economic attitude.”

He is astounded Climate Change minister James Shaw has no problem with this so long as the Government’s billion trees are met.

Lincoln University Professor Keith Woodford in a recent blog said carbon trading looked a risk-free investment so it was no wonder it was attracting large-scale foreign investors.

The cashflow is good and so is the chance the price of $25/tonne carbon will rise. There is also no need for investors to demonstrate to demonstrate a net benefit to NZ. (see www.keithwoodford.wordpress.com/2019/08/05/forestry-decisions-need-to-be-made-now/)

James started working for the Rural Bank in Gisborne in 1984 and came back to the farm in 1989.

When he was with the Rural Bank good farmland in the region went into pine trees. They were planted to protect the area and ironically it is slash from those trees which is now causing major problems. In 2018 two storms dumped an estimated million tonnes of logs and debris from forestry slash on to farms and roads causing millions of dollars of damage.

He says there are urban people and politicians who believe sacrificing the hill country will save the world. Intelligent people are saying don’t eat meat because they believe it degrades the environment and are happy to see pastoral livestock farming disappear.

The recent release of the Intergovernmental Panel on Climate Change’s report on farm land is good news for NZ farmers given their low carbon impact. It reinforces James’ belief in a great opportunity.

His dream is to link up with buyers who expect farmers to look after animals and are excited about what they are doing for biodiversity.

He says what a cool story NZ could have by showing the world that meat coming off its farms is carbon positive and helping to stem the tide of global climate change.

James is not against trees in the right place. He spent a lot of time planting trees. There are extensive plantings of poplar and willow trees on the farm to prevent erosion on the slopes.

As the trees are less than 15 metres apart with 30% canopy, they are eligible to enter the emissions trading scheme, but James doesn’t want to because he sees it as a liability.

James believes the transfer of carbon credits (NZ units) between family generations should not be considered a sale while held in the unit bank. Their allocation carries a contingent liability. A holder of units should be taxed at the point of removal (not surrender) from the unit bank ie: when sold on the open market. Then the holder assumes the risk that replacement cost may differ from sale price.