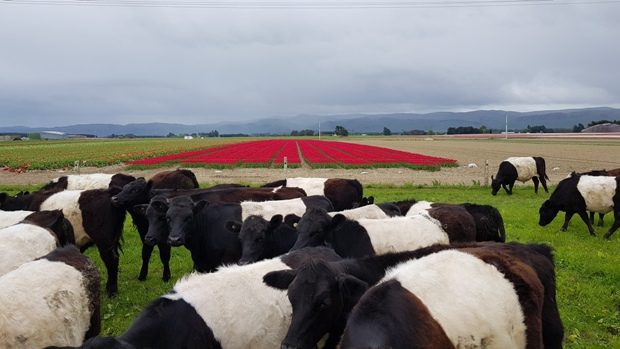 Surprised and shocked would accurately describe my reaction to being asked to pen a column for a publication I love and have read from front to back for more than 20 years. It’s somewhat daunting given the calibre of the other columnists.

Along with my wife Jody and three children Carly (9), Fletcher (7) and Leah (5) we farm 325 hectares in Balfour, northern Southland with my parents Fiona and Ken still living on farm. Our farming operation consists of arable, beef, dairy grazing, sheep and land leased out to tulip growers annually.

It’s a diverse operation which spreads our risk across both our variable climate and commodity cycles, neither of which we can control or influence. We can have wet winters and very dry summers, with all four seasons turning up the same day occasionally just for a laugh. Like all regions it has its challenges, but if it were easy every man and his dog would want a crack.

Family and community involvement is important to us both. With all three children now at school and Jody being president of Balfour Home and Schools she spends a fair bit of time on it not only at home, but also at school along with other parents doing working bees, fundraising events and having just had Agri-week and pet day.

Jody also works for Sgt Dan Stockfoods in Gore and fits in a bit of representative golf as well.

Meanwhile, I have been a volunteer fireman for 21 years and the treasurer for the last 10. It’s a big commitment with weekly practices, monthly meetings and callouts at any time day or night meaning everything else gets dropped to attend. But helping people in their time of need, regardless of the situation is very rewarding.

While it deals up some very rough days, most of the time the role brings a great deal of satisfaction.

After a relatively straightforward and relaxing winter (a fair bit of time spent skiing with the family), the start of August means we spring into action and it’s all go.

Calf rearing begins, start of the fertiliser and spray programme on all the cereals and cultivation of the winter feed areas almost keeps me out of trouble for the month.

September was really just more of the same with a little bit of lambing thrown into the mix and a relatively normal month as far as the weather was concerned, albeit a little dry. The only abnormal event for the month of coarse happened on the 23rd. Under MMP we got a coalition of Labour and NZ First, with the Green Party essentially on a three-year hand-holding exercise.

As I said earlier we are very prone to getting dry and this year is no exception with only 23mm of rain for October and 45mm so far in late November. We require 25mm a week to get by and while the cereal crops are looking very good, they won’t make the combine work too hard if we don’t get good rain asap to fill the heads. While our pasture covers are very good and growing well, that won’t last much longer and the winter feed crops are really going to struggle to establish if the weather pattern remains like this.

While our pasture covers are very good and growing well, that won’t last much longer and the winter feed crops are really going to struggle to establish if the weather pattern remains like this.

A highlight recently was most certainly Agri-week at our local school where the children learned, watched and participated in processing foods they consume. Meat chickens reared from one day old, wheat milled into flour for flat breads, cow’s milk for ice cream and seafood gathered on school camps. This all became lunch at the week’s end and it was a real thrill, not only for the children but also the parents to observe it all. It’s a huge credit to all of our wonderful teachers and the parents involved that made it all happen.

Food and its origins is a hot topic. If we are to inform the wider public about the real, healthy and sustainable food we produce, we must at first make sure our own children know the full story of food production and know it very well. They are of course the very best of story tellers and the key to our future and survival.

Until next time have a great Christmas and a safe journey into a prosperous new year, Cheers!