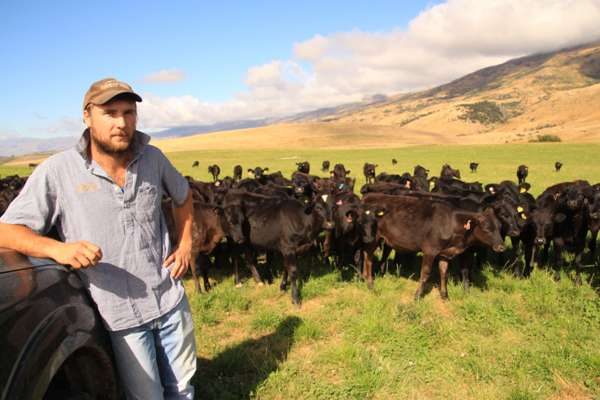 New to Central Otago, a youg farm manager is tackling the challenges of diversifying with Wagyu cattle. Lynda Gray reports.

Joining a farm management beef group has been a win-win for newbie farm manager.

Jason Sutherland (27) was new to the Central Otago area having just taken on his first farm manager role at Tinwald Farm when he joined the Tarras Beef Finishing Group in July 2018.

“I didn’t know anyone so it was a great way for me to meet like-minded farmers, and with this being my first manager’s job it’s been good to have extra support and advice,” Jason says.

But equally valuable has been a feeding suggestion that he’s run with – the growing of Coronet, a forage oat, for green chop balage. Plugging in the crop in early spring following a Spitfire rape and then into fodder beet has been a change-maker on the irrigated and intensively managed part of the sheep and beef farm.

‘They’re not as tough as bull calves and their growth doesn’t really take off until they hit 160 kilograms so you really have to feed them well over those first few months.’

“It’s changed our whole approach to feeding and we’re running more calves, have increased the amount of supplements and at the same time improved feed quality.”

It’s always been a race against time to get enough winter supplements made before summer dry conditions kick in, typically after Christmas.

More often than not balage has been bought in since 2012 when development started to transform the farm from dryland fine wool to a part-dryland and irrigated sheep and beef system (Country-Wide April 2016). In 2018 about $75,000 was spent on supplements but Jason reckons very few if any will be needed this year, thanks to the green chop balage.

In September 40 hectares of forage oats was sown then chopped, baled and wrapped at the end of December. About 800 bales came off the paddock, slightly less than hoped for, but an okay result that Jason’s confident of improving this year. The balage will be fed with fodder beet, the mainstay of winter cattle feeding at Tinwald. This year about 1200 cattle, a mix of Wagyu-dairy cross calves and R1s, and possibly R2 dairy bulls will be wintered.

The Wagyu are a diversification Tinwald has taken on in search of higher gross margin finishing options. Bull beef typically returns about 18c/kg/ drymatter (DM) consumed but Jason reckons Wagyu beef should be about 25c/kg/DM.

But with the higher returns comes higher expectations around the management and supply.

“With bull beef you can chase the schedule and ditch them at short notice but with Wagyu you can’t, you have to keep them for two winters.”

Tinwald joined the First Light Wagyu programme and took delivery of the first 450 R1 mixed-sex animals from Canterbury, last year. Jason had experience with Wagyu while working at Caberfeidh Station in the Hakataramea Valley so they weren’t a total unknown although he’s still getting to grips with feeding them in the extreme Central Otago climate.

“They’re not as tough as bull calves and their growth doesn’t really take off until they hit 160 kilograms so you really have to feed them well over those first few months.”

Whereas R1 bull calves stack on 800-900 grams of liveweight a day, the comparable Wagyu-dairy-cross animals achieve about 600-700g.

Over the winter they struggled in comparison to the bull beef cattle and in hindsight should have had constant access to a high-quality supplement, which is where the green chop will fit in this year.

With Wagyu beef the main determinant of quality is the degree of marbling (intramuscular fat) and that is established during feeding over the calf’s first 250 days of life, Jason says.

“Feeding them well sets them up which relates to having good pasture quality.”

He hopes that improving the quality and consistency of pasture and supplements should bump up Wagyu performance. To get a feel for the peaks and troughs in feed growth an $8500 C-Dax pasture meter bought late last year is used to electronically measure cover fortnightly. This, along with a raft of other animal health, production and farm information is entered on to FarmIQ which Jason has used for the past three years.

Tinwald has been an ever-evolving multi-species finishing farm. When Country-Wide visited in 2016 heifer grazing and steer finishing, and dairy cow grazing were the main income earners. The dairy cows went by the wayside soon after, and heifer grazing is now being phased out.

Bull beef largely replaced steer finishing but they too are being dropped as higher gross margin finishing options are taken on. This year 700 Wagyu calves, 430 R2s and possibly 80 R2 bulls will be wintered along with 1500 Lanaco ewes and hogget’s, and 1700 Headwaters hoggets.

Since 2016 the amount of irrigated area has increased from 400 to 470ha with the addition of an extra pivot and 25km of k-line.

“We’re now looking at how to water the margins which will probably mean more K-line and another pivot,” Jason says.

Two Central Otago-based RMPP Beef Finishing Groups comprise 14 farmers, who are all running intensive irrigation and cattle-based farms. Each group receives $4000-a-farm business over the course of the two years, and in the second year each contributes $800.

The groups meet monthly or six-weekly, usually on a member’s farm where a farm tour is followed with discussion that often includes a visiting professional.

Speakers have covered fodder beet and supplementary feed management, pasture performance and animal nutrition, the development of KPIs, calf transition and management of young stock, irrigation management and technology developments. Co-facilitator Sam Jury says being part of the group has given farmers a unique opportunity to access levels of expertise not normally possible in a traditional field day or larger discussion group format.

“We have excellent nutritionists, vets and agronomists and members have been able to leverage off their knowledge by getting specific answers and advice for their particular enterprise.”

The agreed goals of the groups by the end of the two-year project are to increase the feed harvested for feed and supplements by 15%; increase the kgs/LW by 20%; and develop an environmental farm plan.

Jason’s green chop oat move followed a discussion at one of the RMPP group meetings led by Ben Trotter, an Agricom agronomist who says the supplement is ideal in an intensive finishing system such as Tinwald’s where the focus is on maximising the quality and quantity of drymatter grown.

The crop germinates in early spring, which is usually too early for ryegrass, and is an effective nutrient mop-up crop and weed suppressant. But timing is critical to success with the ideal harvest time before it goes to seed.

“It can become a race against time and the sooner you can get it in the ground after winter the better because the closer it gets to Christmas the more likely it is to go to seed,” Ben says.

Not a lot of green chop oat balage or silage is made throughout Otago. Whole-crop oat silage is more popular because it tends to be higher yielding although the Crude Protein is lower (9-11% compared to the 14-16% of green chop).

After four years the Tinwald opportunity came along which Jason and wife Kelly were keen to grab. Both liked the climate and for Kelly, a beauty therapist, the farm was an easy drive for work, preschool and schools for the couple’s three children Alexia 9, Asher 5, and Wyatt 2.

Tinwald is owned by Amanda and Adrian Currie and managed by Compass Agriculture. The Curries, formerly from Christchurch, built a house on Tinwald in 2018. They take an active interest and are supportive of Jason building his farming knowledge which has led him to start a two year Primary ITO Diploma in Agriculture. At the same time Jason is doing his bit to help others into farming, providing hands-on job experience for agricultural students at Otago Polytechnic’s Central campus based at Cromwell.

Students help out with a range of tasks; from feed budgeting to the weighing of lambs and calves. Jason likes the arrangement which led to the employment late last year of graduate Maddy Calder.