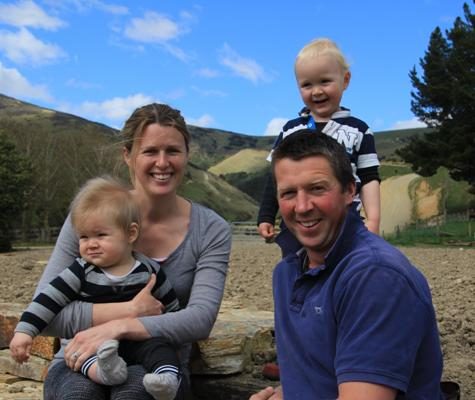 Big and bold hill development has created plenty of space for Argyle’s 3000 hinds. But Jeremy and Sally Gunton have their sights set on fine-tuning their extensive system with the recent purchase of some lower lying country.  Lynda Gray reports.

Wind-shattered deer netting is a reminder of just how brutal the weather gets on the exposed ridges of Argyle Station’s hill country.

The regular battering from southerly winds can literally tear the fences apart in a short time. But for all that the steep and rolling hills with pockets of scrub has proved to be the ideal home for 3000 breeding hinds.

“The good thing about Argyle is that you can farm on the hill tops and the pasture growth curve is well-suited to deer,” Jeremy Gunton says.

In 2007 the Guntons ring-fenced 1000 hectares of steep, semi-developed hill in the south-east corner of the station for 1000 hinds and safari hunting. The hinds thrived with minimal input and encouraged Jeremy and Sally in 2012 to deer-fence another 20km, including the safari park.

‘It’s always difficult to break-fence on the hill so it’s difficult to manage and utilise crops well so we want to change the hill into a mainly grass system.’

The area was subdivided into four blocks for the wintering and fawning of hinds and over the next two years the hind herd was increased to 3000 by a mix of mostly homebred replacements and a limited number of feral captured animals. Unfortunately, not all the feral introductions adapted well to the farmed system which led to a major culling exercise of dry hinds following scanning and weaning.

With the hind clean-out complete and the breeding programme back on track, using homebred maternal sires and Wilkins Farming F1 terminal sires, the Guntons are entering a new deer farming chapter following the purchase earlier this year of 580ha of lower-lying paddock country. The new block, adjoining an eastern boundary fence, has a good mix of improved pastures and will be the perfect platform for building a velvet herd and fine-tuning the finishing of weaners.

“We’ve been limited by a lack of finishing country so this is giving us a lot more balance.”

The block had no deer fencing but Jeremy was quick to change that putting up 6km of perimeter fencing in just over 10 days. An $800,000 budget has been set for the building of a shed and yards, water scheme development plus 50km of fencing which will cost about $8/metre in posts and netting. Jeremy wants to have 36km fenced by spring 2018.

“We want to wean fawns on to the block and in spring the stags will go there in the lead-up to velveting.”

Winter crop will be grown on the block. Until this year about 30-50ha of turnips and kale was grown on the hill country for weaner feeding but yield and utilisation was decidedly average with tonnages ranging from 3 to 10 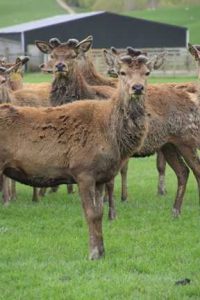 “It’s always difficult to break-fence on the hill so it’s difficult to manage and utilise crops well so we want to change the hill into a mainly grass system.”

About 220ha a year is regrassed, this will be increased, and the amount of winter crop decreased.

“Growing crop has been a cost because of the poor utilisation. If we can reduce this and grow more grass it will improve production, so we can get more mouths away sooner and have fewer to feed over winter.”

Until the recent land acquisition there was only 20ha of flat deer fenced land, which was a serious limiting factor for a system running 6000 deer. The 580ha of subdivided and improved pastures will bring some much-needed balance.

“We want to improve the finishing side and will be able to do this with smaller-sized and better-managed mobs.”

Since 2012 weaners have been wintered for finishing in a simple mostly hill-based system.

Until last year all were weaned into a single mob to graze young grass on the hill country but the downside of grazing big numbers – 2600 last year – in one big block was mob stress.

“We could never feed all of them well enough so ended up with a sizeable tail end in weights.”

In a step to refine finishing management last year 95ha of flats was deer-fenced and fodder beet grown and fed to the top cut of 1000 weaners. Jeremy was impressed with how the weaners wintered and will run the same split feeding system next season.

He owned two deer farms near Taumaranui and sold those and moved the resident deer south when the Argyle lease was bought. Mark oversaw an ambitious development on the steep hill country turning over 1000ha of manuka scrub and gorse for new pasture, and bulldozing hundreds of kilometres of tracks.

Jeremy and Sally, both Lincoln university graduates, took on management in 2007. It was always Jeremy’s goal to take on the management role and work on several Canterbury and Marlborough farms had given him excellent background experience.

Sally, a BAgCom graduate and fertiliser sales rep, was equally keen. When they moved to Argyle there were 50,000 stock units but lean financial times, due largely to lamb prices, forced them to consolidate over three years to 40,000.

“In hindsight the development was too condensed for us. A lot of the developed pastures were needing to be renewed but we didn’t have the money to do it, so we weren’t able to manage and reap the benefits of such a huge area.”

It was survival mode, but the upside was that it gave them the chance to get to know the property and understand what it was capable of.

By 2010 they were ready to move forward with the next stage of development. Specific areas of the station were selected for pasture redevelopment and fencing. In some cases this has meant refencing to contour to make mustering of deer easier.

“We’re still learning as we go.”

Collectively the development along with some breeding changes have moved Argyle from a store stock to prime stock finishing enterprise and changed the sheep/cattle/deer from 70:18:12 to 40:30:30.

With a more balanced land production base now in place, the next step is further subdivision and the opportunity for micro-management to further drive stock liveweights.

The reasonably rapid development of Argyle’s deer operation is due largely to the bold hill country development.

“We wouldn’t be where we are now without it,” Jeremy says.

Although parts of the 1000ha developed block were destined mostly for sheep, the decision was made for all deer fencing because of the relatively minor $2.50/metre differential between deer and conventional fencing.

A double weed spray, an Italian perennial ryegrass mix, 200kg/ha DAP and two tonnes of lime worked out at about $700/ha plus fencing at about $14/metre.

Transporting and flying on lime works out at about $85/tonne and is the biggest limiting factor.

The chosen pasture, a diploid and tetraploid ryegrass mix with some small to medium-leaf white clover and cocksfoot has worked well. Jeremy has gone with Warrior cocksfoot, an earlier-flowering variety that after five years is still performing well.

The first onfarm sale of Umbrella Range Angus bulls was held in May this year. The stud was established by the Guntons in 2005 from the dispersed Merrydowns Angus herd. Initially the bull progeny was used solely at Argyle but inquiries from others led to an increasing number of private sales and this year’s onsale offering of 22 bulls.

The breeding focus is bulls that produce hardy, medium-framed cows which perform in unforgiving hill environments such as Argyle.

Halfbreds were run on Argyle before the Gunton’s arrival but they were phased out and replaced with Romdales, some of which are bred to Sufftex terminal sires.

“This season will be a good test. We had a good spring, so it will be interesting to see how many lambs we get out the gate.”

The 2017 lambing result was 135% (lambs from ewes mated) and the 3700 from the weaning draft achieved 17kg carcaseweight.

Big and bold hill development since 2002

A change from store stock to prime stock finishing enterprise

A change in some stock breeds/genetics

Recent 580ha purchase of lower-lying paddock country to be developed for velvet stags and weaner finishing.

To fence 50kms and build yards/ shed on recently purchased

To velvet 600-plus MA stags