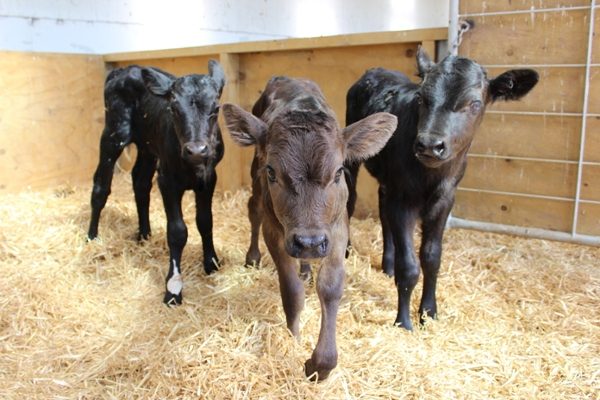 By now you have probably waved goodbye to the last of your bobby calves for the season.

After giving them four days (and probably more) of milk to drink, a warm and dry place to live out of the weather and as much care and love as you have time to give, they have been loaded on to a truck and their very short lives have ended.

But have you ever thought about what happens to them after that? Is that really comfortable pair of calf-skin leather shoes made in Italy that you own possibly your bobby? Or is he now your leather sofa that you sit on with your kids to watch TV?

Well, he could be. And a whole lot of other everyday goods that bobby calves are processed into.

Young calves destined for the processing plant because they are not going to be raised as dairy herd replacements or for beef are called bobbies because farmers used to get a bob for them, which is what a shilling was called long ago.

When decimal currency was introduced in 1967, a shilling became 10 cents and with inflation some farmers probably feel they don’t get paid a lot more for their calves today.

‘Calf skins are highly sought after for their strength and high quality and for many years they were predominantly sold to Italian tanners for high-quality women’s shoes.’

But they are far from the industry’s waste product we are often led to believe. They are, instead, an important part of the meat industry and one the Alliance Group at least, don’t want to lose.

Alliance process bobby calves every spring with plants from Dannevirke in the north to Lorneville in the south and group key account manager Murray Behrent says the timing of the bobby calf season works well for the company.

“They are very important to Alliance’s product range as they provide additional processing options in a period of the year when we have processing capacity,” he says.

And not only is every part of the calf useful, he said some of the products were unique and could only come from bobby calves.

“Calf skins are highly sought after for their strength and high quality and for many years they were predominantly sold to Italian tanners for high-quality women’s shoes.

“However, we now have increasing numbers of skins going to high-quality European furniture production tanned with the hair on,” he says.

Loin cuts are sold to various countries where they end up on the plates of restaurant diners who have probably never seen or thought about bobby calves and the legs are sold to the European Union and the United States where they become escalope of veal, again mainly to be served in expensive restaurants.

Those chowing down on a burger in the US, EU and the Middle East also get to enjoy the meat as the trunk is marketed for manufacturing and usually made into ground beef.

“We’re also seeing some demand from China for whole carcases or a six-way cut,” Murray says.

Waste and bones go to rendering plants for the production of meat and bone meal.

Even the calf blood is collected and made into new-born calf serum which is one of the most valuable products from the calf and can’t be replicated or made any other way.

It’s used as a growth medium for tissue and cell cultures and also in vaccines, dietary supplements and even cosmetics. Yes – that’s right, bobby might also be in your makeup.

And then there are the stomachs (which is the abomasum of the calf), also known as vells, which are used to make rennet for cheese.

On one Greek food company’s website, Aristomenis D. Phikas and Co, it says it hand-washes the stomachs “of young New Zealand milk-fed calves” then inflates, ties them and dries them “as gently as possible in special air chambers”.

If you want to know what a dried calf stomach looks like I suggest you Google vells and you will find some (what I would call) interesting pictures. In other words, we’re not going to show you because they don’t look very nice.

According to Wikipedia, traditionally the dried stomach is then sliced into small pieces and put into salt water or whey, together with some vinegar or wine to lower the pH of the solution. After it is left either overnight or for several days the solution is filtered. What remains in the filtered solution is rennet which is used in cheese making to separate the solid curds from the whey.

Of course, you can make cheese using rennet from other sources but it seems the Europeans have a thing about tradition and NZ vells.

Our disease-free status and national traceability scheme helps all of these exports plus the fact that we don’t give our calves destined for the meat works antibiotics.

Ideally, Alliance would like calves to be more than 16kg carcaseweight (CW) but if they are heavier than 30kg CW they fall outside of the market’s specification, Murray says.

When calves arrive at processing plants, they are inspected by a Ministry for Primary Industries veterinarian to ensure they meet the required standard under the Animal Welfare Code which is that they must be healthy and alert, able to bear weight on all four legs and at least four days old (they have to have a dried navel cord).

The code also states that calves must be slaughtered as quickly as possible once arriving at a meat plant and within 24 hours of their last feed on farm.

They also can’t be trucked for longer than 12 hours and definitely not across Cook Strait.

Murray says he has been impressed with the standard of calves delivered to Alliance plants this year so give yourselves a pat on the back. We’ve done okay.

And if you are not feeling too squeamish by all of this, it might be a good time to think about remembering to give bobby a hug and some extra love next season and thank him for the beautiful shoes, the vaccines, your lippy and of course, the cheese.