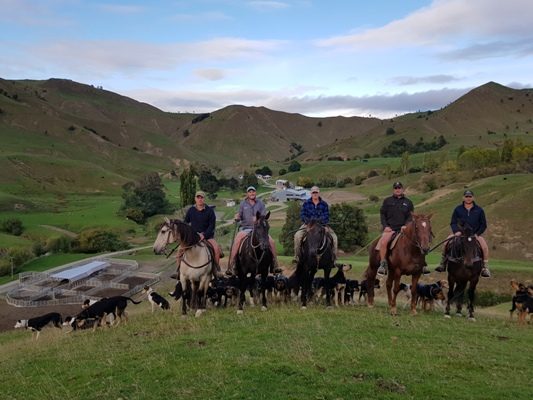 Behind many successful hill country sheep breeding and finishing operations is a cow herd.

Tolaga Bay’s Mangaheia Station is one of these, relying on an 800-strong Angus cow herd to do the hard yards and keep unrelenting pressure on the steep hill country pastures so the sheep can flourish.

“Cows are absolutely essential to the success of our sheep operation,” manager Leo Edgington said.

“They are irreplaceable to the extent that I consider their calves are merely a by-product of their vital role but a worthwhile one.”

Situated 45 minutes north of Gisborne and five minutes from the historic Tolaga Bay wharf iconic Mangaheia Station (2720hectares – 2400 ha effective) is owned by Annette Couper and has a long history of innovative and committed management. Edgington, 37, was mentored by the previous manager of 40 years, Howard Ingles.

Ranging in altitude between 20 and 400 metres above sea level the station consists of some steep north-facing country, a lot of good medium contour country and some flats (5%). Ten percent is cultivable.

The area is normally considered winter wet and summer dry with an annual rainfall of 1400mm arriving mostly from the east and north-east with little if any from the north, west and south.

Renowned for its mild winters when pastures continue to grow throughout, Mangaheia’s most challenging farming period is during the summer.

They’ve got some hard north-facing country that can dry out and in some years. this occurs much earlier than others.

“The weather’s been all over the show lately with dry springs and wet summers, so we really don’t know what we’re going to get nowadays.”

Hill soils are clay-based (sedimentary) while the flats are classified as Waihirere silt loam. Soil fertility levels are excellent indicative of a long history of regular fertiliser applications. Olsen phosphates are 25 on the hills and 40 on the flats, pH ranges between 5.6 and 5.7 and sulphurs are low requiring regular applications of both sulphate and elemental forms. The early lambing country representing 30% of the station receives 300kg/ha of Flexi-N annually in early June while the rest of the hill country gets 225kg/ha of super (sulphur super every second year) in late July. A total of 600 tonnes of fertiliser is applied annually.

Subdivided into 55 paddocks with traditional eight-wire post-and-batten fences, the station prides itself in its excellent infrastructure. An 11-stand, 3000 night-pen woolshed and yards, new cattle yards and numerous satellite yards as well as excellent accommodation for its farm employees all contribute to ranking Mangaheia in the top 10% in the district for capital investment.

Cows are the backbone of Mangaheia having to compete with sheep all their lives on meagre rations and Leo is the first to admit they are definitely treated like second-class citizens.

“That’s the best way we can make the system work.”

They must keep on top of those seed heads and maintain pasture quality for the sheep otherwise their performance levels will drop.

To achieve this, cows are set stocked on the steep hills most of their lives only being mobbed up for mating and at weaning. Even when rearing calves the cows are made to work hard because Leo maintains that 90% of the pastures have to be cleaned up by early autumn to ensure a good clover set.

They don’t want to have to be cleaning pastures up over the winter.

“Because we get kind winters with good growth, we know we can push the country pretty hard over this period allowing us to carry enough stock to control the spring flush.”

By weaning the cows will have done their job allowing them to be set stocked over the steeper hill country. Every 40 days throughout the winter each of the paddocks they are in will be invaded by a large mob of hungry ewes forcing them to live on rushes and fresh air until significant regrowth occurs for them to be able to get their teeth into.

Their steep hills are too fragile to have large mobs of cows being rotated over them during the winter so the ewes do this. Because winters are short and growthy they avoid long rotations.

“The cows live on the steep faces and you seldom see them hanging around gateways.”

Dry R2 heifers are not excluded from this tough love being set stocked like the cows and made to face the ewe tsunami every 40 days.

Because the cows are competing with ewes all their lives constitution needs to be Leo’s highest priority when selecting herd sires and replacement females.

“It’s vital the cows can compete and get back in calf.

“We do a lot of culling on constitution and type getting rid of any extreme females that are either too big or too small and also cull any dries and wet dries.”

In recent years Leo has been finding it increasingly difficult to buy bulls to meet his strong maternal breeding objectives.

So three years ago he started breeding their own bulls.

A hundred of the top cows were selected and mated to appropriate “stud” bulls with the cows and calves being recorded on Breedplan using their PRAC (Performance Recorded Angus Cattle) register. This enables Leo to benchmark their recorded cattle against all Breedplan recorded cattle in Australasia.

The intention was to breed their own bulls, however they had inquiries from a number of commercial Angus breeders looking for good affordable Angus bulls. Their aim is to sell up to 25 surplus two-year- old bulls.

“This year will be the first year we will be doing this.”

The station’s cattle breeding objectives are aimed at producing a moderate-framed robust female with moderate growth, the ability to store fat on her back, calve without assistance and get back in calf in three cycles.

He didn’t want the calves to be so small at birth that their survival is compromised so he will be focusing on the calving ease EBVs rather than birthweight.

‘We’ve topped the traditional breed section of entries at the fair for the last 10 years. Last year the steers’ average weight was 400kg and we got $1480 with our average over recent years being somewhere between $1300 and $1400.’

“If you keep on using low birthweight bulls and retaining their female progeny in your herd you’ll end up with a serious herd calving problem.”

He will use a low birthweight bull to mate the recorded 15-month heifers but won’t keep any of their progeny.

To date Leo has not mated the commercial 15-month heifers because he believes he has enough high-priority mobs on the station and wanted to concentrate on the hogget mating programme which he considered higher priority.

Bulls are introduced to the 210 two-year-old commercial heifers on November 20 for two cycles with the bulls going out with the MA commercial cows on December 10 for three cycles. About 900 cows and heifers go to the bull with about 750 being calved. The bull-mating ratio is 1:40.

The most recent bulls bought have been from Gisborne’s Kaharau and Rangitira Angus studs, however in future these will be sourced from their own recorded herd with only the occasional stud sire being bought to service their elite herd. Leo has normally paid about $10,000 for their station bulls.

The average in-calf rate is 96% and calving, 89% based on cows wintered.

Cows are calved without any supervision among the ewes in the paddocks they have spent winter in. Weaning takes place about March 15 in gateways between paddocks where cows and calves are separated using horses and left to settle down for about three days with only a fence between them. After this calves are quietly moved away and drenched before being set stocked on paddocks with better covers.

“I don’t yard-wean the calves because there are too many of them (more than 700) but the system we use works well with the calves settling down relatively quickly. I do however yard-wean the recorded calves.”

Average weaning weights of calves is 220-230kg for the commercials and 240-250kg for the recorded ones.

Wintering the weaner steers takes place on crops of kale, swedes, winter rape and a picking of grass on some of the easier hill country subdivided into blocks using temporary electric fences. In early November when the dry weather starts to slow pasture growth all the yearling steers are trucked off to the Matawhero saleyards in Gisborne and sold at the annual yearling cattle fair for excellent money.

“We’ve topped the traditional breed section of entries at the fair for the last 10 years. Last year the steers’ average weight was 400kg and we got $1480 with our average over recent years being somewhere between $1300 and $1400.”

The weaner heifers are set stocked over the winter with the ewe hoggets on some of the easier hill country. Culling of these takes place before the second winter with about 210 kept as replacements and the balance being killed before their second winter at 230kg – 240kg.

The soils on Mangaheia are copper deficient so all cattle receive a copper bullet before the winter and a 7-in-1 vaccination with the tail-end cows getting a liver fluke drench.

Weaners get drenched at weaning and four times throughout the winter.

The station grows an annual crop of 70ha of kale, swedes and winter rape on some of the easier hill country. This is aerially sown and is fed to the weaner steers during the winter. In the spring the area is resown in high yielding perennial ryegrasses and clover.

Sixty hectares of dry-tolerant chicory and 50ha of clover are used to finish lambs over the summer.

Bearing problem seems to be solved

The sheep are unquestionably the economic powerhouse of Mangaheia, thanks to all the hard work done by the breeding cows.

The 10,500 mainly Romney ewes based on Hildreth and Teutenberg genetics with a splash of Brickle Perendale through them are made up of 3500 B flock ewes which go to the Southdown ram. About 7000 A flock ewes mated to Romney and Perendale rams.

They don’t have a cut-off mating weight for the hoggets.

“If the small ones do get in-lamb we pump the high-octane feed into them so they are a good size at lambing. “We get most of our hoggets to 60kg by lambing.”

Dry hoggets are on high-quality feed and killed in July.

Leo aims to keep ewes in good condition most of the year and flush them for a period of 20 days starting 10 days before the rams go out. Fifty days after the ram-out date the ewes are put on a maintenance ration followed by a month of sub-maintenance feeding designed to reduce internal fat levels.

“This seems to have solved our bearing problem,” Leo said.

This concept is supported by an ex-farmer who practised this more than 20 years ago.

Weaning of the B flock ewes occurs about November 15 when Leo expects to POM (process off mum) 60% to 70% of their lambs at 18kg and at the same time kill 2000 of the old ewes. Getting these off the station as well as the yearling steers takes a lot of pressure off dwindling feed supplies.

The A flock ewes are weaned during the first week in December with 2500 of their wether lambs being POM at 17.5kg.

Leo aims to POM 6000 lambs before Christmas at an average weight of 17.5kg.

Staff on Mangaheia include a manager (Leo Edgington), three shepherds, a cook and a tractor driver/general. The station breeds its own horses with each shepherd breaking in one to two horses each winter.