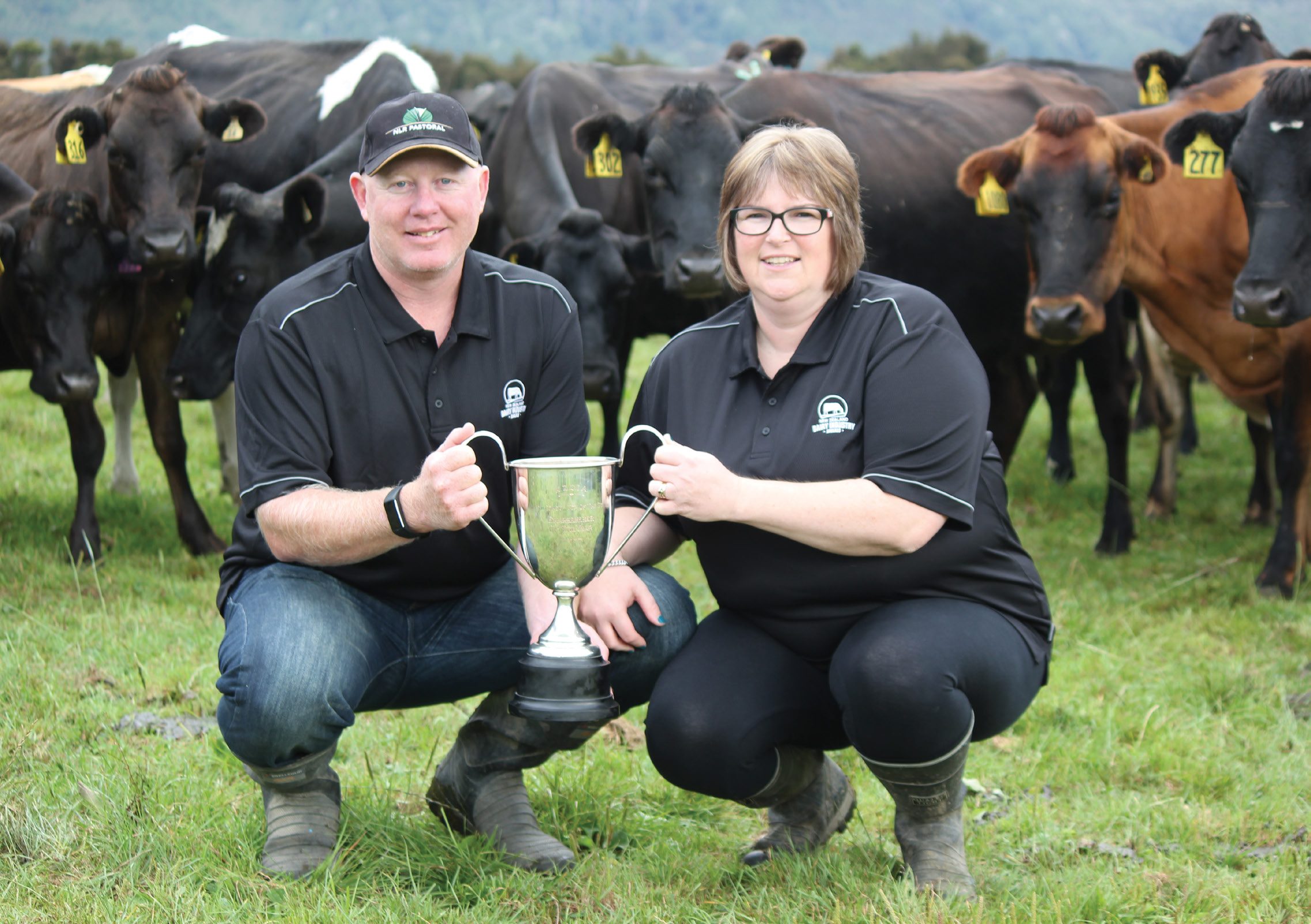 The winners of this year’s West Coast-Top of the South Share Farmer of the Year competition are the techno whizzes behind the pasture management app, Cowculate.

Noel and Louise Rockell are in their third season as contract milkers on a Dairy Holdings’ farm at Maruia where they milk 1050 crossbred cows at the peak of the season. Today they have the handy app to calculate – or more aptly, Cowculate – pasture demand and total feed demand by creating multiple herd groups with different feeding scenarios.

Several years ago while working on large-herd Mid-Canterbury farms, there was always the challenge of producing figures on paper to work out pasture and feed demand. Noel decided there had to be an app to do the job and when he discovered there was no app, he decided to create one.

“There was absolutely nothing and I’m a bit technology minded, so I thought I’d do it myself.”

He downloaded the app development software from Apple in the United States and had a go. The first couple of attempts were deleted, but he stuck with it and taught himself Objective-C coding. 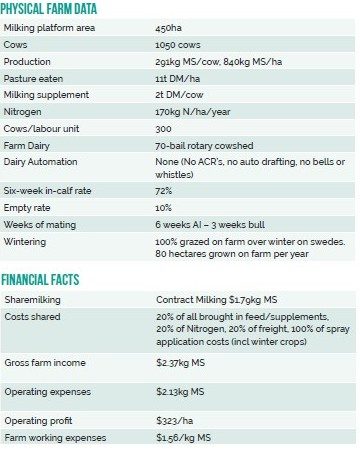 “It took about two years to thrash out something that worked that we could use in our own business. A lot of managers now have it and it has been quite beneficial. But if I had to do it again I probably wouldn’t!”

Initially it was designed as an Apple app and after its success they then made it available for Android devices by subcontracting it to a company in India for java coding.

The Rockells get 80% of both Apple and Android app sales and the app is in the top 10% of most uploaded business apps. Noel sums it up as a good app for keeping track of rotation lengths and feeding rates.

“Some people can rattle off figures, but maths isn’t my strong point. Today’s managers need to know information straight away and it just allows me to put this information in and then it crunches the numbers in a few seconds.”

All vital information on the Maruia farm where Noel and Louise are just completing their third season. It’s a wet, cool, mountain climate where grass growth slows in May and balance date isn’t until October 10 to 15.

“We follow the spring rotation plan quite closely because you can get a situation like this spring where it stayed wet and cold to the end of November. So you don’t want to eat everything you have.”

Maruia is a tiny settlement in a deep valley squashed between mountains, inland from the rest of the West Coast, which is a different world from where the couple began their dairy journey. Noel gained a degree in Applied Science at Massey University, majoring in agriculture and he met English-born Louise in Northland where they began their dairying career on a family farm.

“Louise was on holiday visiting friends. I met her in a pub in downtown Whangarei and invited her back to the farm and she never left. She moved in after two weeks and we married 12 months later – I met her parents for the first time the week before the wedding.”

Three kids came along, Matthew who is now 16, Ryan 15, and Rachel 12. After 12 years of droughts and floods, plus the global financial crisis, they headed south to Canterbury where they spent four years managing 900 to 1800-cow dairy farms before taking their next step to contract milking with Dairy Holdings.

“They have a unique employment contract where you can progress through to 50:50 sharemilkers by putting lease cows in the herd and we thought it was an opportunity to progress.”

The farm covers 450 effective hectares including 50ha of slightly under-developed hill country that is sprayed and then seeded by helicopter with a crop of swede for cows to graze through winter. They have assigned this area for winter swedes for the past three years so that under-developed country can be worked up, fertilised and reseeded back into better-performing pastures.

Swede performs well in the wet and cooler climate that is typical of the Maruia Valley and it enables them to winter 100% of their stock. The wet, variable climate has led them to be proactive in their management decisions to minimise the effects of large rainfall events that lead to pugging damage and nutrient runoff. Online weather charts are monitored closely so they can better predict the weather.

From the base of the hills, the rest of the farm is made up of river flats and terrace country where they run a system two operation through the season that is predominantly pasture based. The herd begins the season on twice-a-day milking and when the feed pinch comes in, they switch to three-in-two milkings.

“You have to have a pretty good handle on pasture utilisation and we do that by being proactive on observation and we measure weekly. We talk to the staff and train them up with pre and post grazing residuals.”

Their focus on pasture won them the Ravensdown Pasture Performance Award and they also won the Meridian Farm Environment Award, the Honda Farm Safety, Health and Biosecurity Award and the DairyNZ Human Resources Award.

They employ 3.5 fulltime staff, usually Filipinos, and their 2IC, Dennis Azcarraga, has been with them for six years now on three different dairy farms.

“It’s difficult to find Kiwis, especially where we are – three hours from Christchurch and two hours to Nelson and Greymouth. We’d much rather have someone with no dairy experience but is keen to give 110% and has enthusiasm to learn. Their integrity is awesome and it works well for us because Dennis has quite a lot of experience and they all look up to him.”

The health and safety regime for their staff which won that award, follows the Dairy Holdings programme which has been set up on its large-scale dairy farms.

“They provide the systems and it’s up to you to implement them and go for it. The big thing is the sign-in register, the hazard board and weekly meetings. The Hazard app is good too for any hazards on farm or near misses that can be recorded on the app and a text message is sent out to staff.

“And we acknowledge the mental health side because with dairy farming, you work where you live and you live where you work. You can’t go home in the weekend and switch off; you’re there all the time.

“We encourage them to talk and communicate and let us know. We’re a team and a team needs to pull together, so it’s about keeping the communication channels open.”

Located so far from major civilisation means the same ingenuity used to create the Cowculate app, is needed for all those farm jobs that usually requires a phone call for outside skills.

“If something breaks down it can cost more to bring someone out to the farm than actually do the job. You find number eight wire comes in quite handy for a lot of things.”

The community plays a big part in the success of the business because it would be a hard battle by themselves in the “middle of nowhere”.

“While we are extremely isolated, everyone in the community pulls together and helps out. Maruia is truly what New Zealand used to be like. Every three months or so there’s a local dinner at the community hall.

“We wouldn’t be able to achieve what we’ve done without the support of friends and family and neighbours.”

As good as it is, it’s time to move on and grab the next opportunity as they aim toward their long-term goals. This time it is a 900-cow farm near Westport where they will be contract milking. Beyond that, farm ownership is top of the list with

a 200ha to 300ha farm, or alternatively, a large-scale sharemilking business or equity partnership. They have investments off farm as well so they can take up opportunities if they arise.

“Farm owners need to promote the dairy industry and the great things we do rather than feeling they need to hide it away. Especially now considering the impact of Covid19 on the tourism industry. It’s agriculture and the dairy industry that’s going to keep the New Zealand economy going over the short term and we need to celebrate the farmers and what we do through events such as the New Zealand Dairy Industry Awards.”

When they are not taking care of business, the Rockells are tending their 25 beehives on the farm and harvesting honey which they sell locally.

Question: What has helped you the most in dairying to get you to where you are today?

Runners-up in the West Coast/Top of the South Share Farmer category were Hokitika sharemilkers Andrew Wiffen and Kate Lambert and third place went to Mark Ring and Sarah Hope from the Rai Valley.