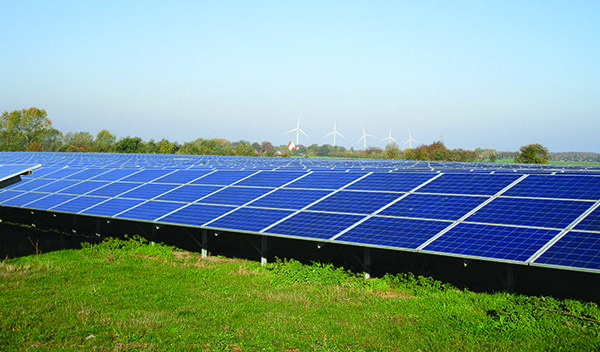 As the Covid-19 virus sweeps the globe forcing countries into economic recession and lockdown in desperate efforts to slow the disease and death rates, it also has the potential to help reduce the impacts of climate change.
“Because of the strong drop in economic activity world-wide, there will be a short term reduction in greenhouse gases for 2020; maybe as much as five to 10 per cent less emissions,” Will Steffen, Earth System scientist and Emeritus Professor at the Australian National University told NZ Dairy Exporter.
Will acknowledges the loss of lives and suffering experienced by people world-wide is horrendous and it’s not the way he predicted positive change could occur to the climate system.
However, he also hopes something good will come from the pandemic and that governments, businesses and the public will see emissions reductions and changes in lifestyle as an opportunity to help the planet.
“As countries recover there is a real opportunity to power economies back up by investing in environmentally friendly initiatives such as renewable energy, electrified transport, codes for more energy-efficient buildings and in New Zealand, reducing methane emissions and nutrient leaching from the agricultural sector.
“These would be ways to power economies back on to their feet and at the same time lock in lower emissions for the future.”
There’s a risk that economic stimulus will focus on returning to the status quo and the opportunity for positive change will be lost.

“Incumbent industries, including those reliant on fossil fuels, will not want to be swept aside and will argue for subsidies to get back on their feet.”
However, Will hopes “people power” will come into play and build pressure for change.
“Self-isolation will be a detox from the fast-paced, highly digital world we have come to live in, and is a chance to enjoy other aspects of life including a slower pace and less consumption.

“There is a philosophical debate starting to arise that as we come out of the Covid-19 crisis, we may not want to go back to the same lifestyles. There are a couple of different nuances to ways Covid-19 could have strong and longer-term impacts on climate change, not just the immediate drop in emissions s because of reduced economic activity.”
People may find they enjoy working from home and don’t miss the daily commute stuck in traffic. Businesses may also move more quickly towards remote workplaces.
NZ’s primary sector, dairying in particular, will likely lead the recovery for this country and Will says how that is done could be a real model for the rest of the world. The NZ primary industry sector has already been talking about a deeper transformation to get methane emissions down in the dairy sector and animal sector generally. 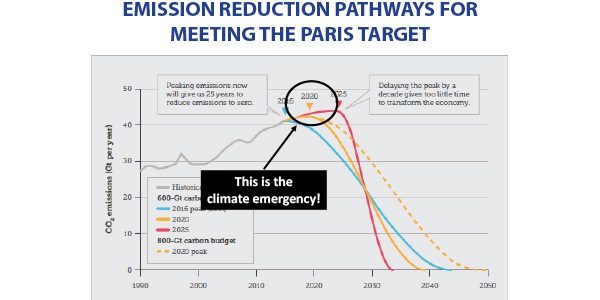 “The idea of off-setting carbon emissions by growing trees is one option but another is to invest in rebuilding and restoring ecosystems in more complex ways. By doing so New Zealand could be a model for the rest of the world.”
Planet Earth is on a trajectory towards two possible outcomes – “Stabilised Earth” in which humans could survive, and “Hothouse Earth” where they may not, Will says.
If the world managed to keep global warming to the Paris Agreement of 1.5 or 2C, the more catastrophic outcomes of climate change could be avoided. However, the Earth’s climate would be harsher, some places uninhabitable and food production won’t be possible in some parts of the planet. Population levels could drop in some parts of the world, and in some places, people would have to live indoors because of extreme heat and rely on desalination plants for water supply. “There’s a huge amount at stake.”
If warming went up by 3C to 5C, that would very likely lead to Hothouse Earth, conditions which couldn’t easily be reversed.
“I think humans would struggle just to survive in those conditions. This would possibly lead to a collapse of civilisation as we know it.”
Will says while climate scientists have been warning of the dangers of unchecked emissions driving accelerating climate change for decades, their arguments have been largely ignored by governments and big business.
“Experts in medicine are having strong influence in Australia right now and it was striking to see, (early on in the pandemic) that the federal government stopped playing politics and started listening to people expert in communicable diseases and pandemics.
“It was breath of fresh air and the right thing to do. It is strikingly different from what happens in the climate and Earth System field. We give recommendations about what needs be done but are totally ignored in favour of vested interests. 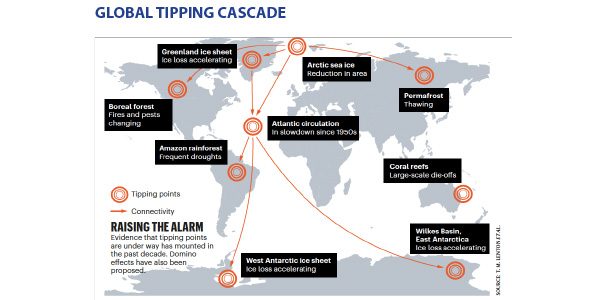 “The psychology is quite different. A pandemic has an immediate effect on individuals especially when we know someone who is ill or face lock down and self-isolation. There is an immediate threat to health and existence. The climate change threat more is diffuse, difficult to feel and understand in everyday life.
“Climate change is like a long fuse with a big bang at the end. The fuse is burning faster and faster, but the bang appears a long way off. With a pandemic – the explosion is in your face.”
How severely the pandemic affects individuals will depend on where they are in the world.
“No country will come through unscathed and there will be different outcomes in different parts of the world. The most vulnerable people, anywhere in the world, are always hardest hit by the impacts of climate change, a pandemic or global recession and this is a stark reminder of the growing inequality on our planet which is not sustainable in the long term.”