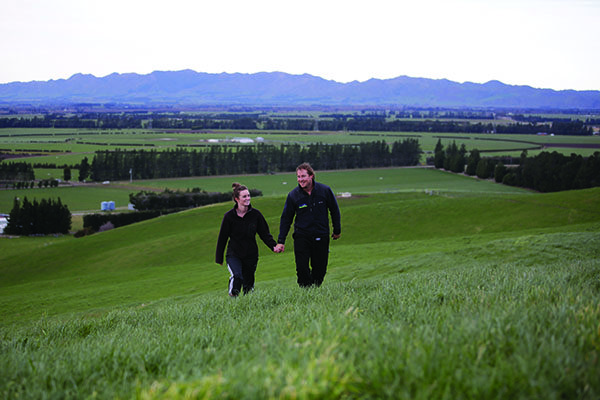 Contract milking has been a great move for Matt and Amelia Weatherhead but they warn it’s not something you should rush into.

“You’ve got to do a lot of homework before you sign a contract – get good advice,” Matt says.

“And make sure you’ve got financial skills to do cashflows so you really understand what your financial situation’s going to look like through the whole season,” Amelia says.

At 25 years old, the couple are fast tracking their way through progression, having front-loaded their careers with degree qualifications at Lincoln University.

Both have a Bachelor’s degree in Commerce with Matt majoring in agricultural farm management and Amelia majoring in accounting and now qualified as a chartered accountant.

She’s worked for Alexanders Chartered Accountants in Christchurch for the past 4 years and works two days a week from home since they took on the 900-cow contract milking job last season.

Matt’s been dairying since he finished his degree at the end of 2013, working for Canterbury farmer Leo Donkers and then for two seasons as 2IC on the Lincoln University Dairy Farm (LUDF).

While the LUDF job meant being right in the public eye, Matt says he learnt an enormous amount about pasture and cow management from the farm’s manager Peter Hancox and from being included in the farm’s management discussions.It was during that time the couple’s first foray into business started with the purchase of 30 calves. The following year, as the payout crashed, they seized the opportunity to buy 120 more.

“Between us we weren’t earning big money but with Amelia studying to become a chartered accountant and working full time there was no time for spending money anyway!

“We’d done the cashflows and they were pretty tight because we were paying grazing for 150 animals but we knew we could do it,” Matt says.

The idea was they would lease them out as rising two- year-olds and continue to grow their equity in stock, buying on lows and selling when prices were higher.

“The good thing with calves is that you don’t have to pay as much up front compared with buying rising 2 year heifers or mixed age cows but we still needed to be able to cashflow the grazing,” Amelia says.

Their cattle business was set up as a partnership.

“That gave us the flavour of owning our own business – meeting with the bank manager, doing GST, doing cashflows,” she says.

In 2016 the next step had then been managing or contract milking and the couple took a look at several opportunities.

They’d built up equity in their stock and talked to their bank about what was possible.

“For us contract milking was the next step – where we could grow but still de-risk our business in terms of the volatility we’ve been seeing in milk price,” Amelia says.

They wrote down the pros and cons for everything and took any contracts to advisers they trusted.

One option was a 400-cow contract milking job but at that scale the contract only delivered a management wage and Matt would be tied up twice a day milking cows with one other staff member.

In some cases contracts can be capped but they believe that if the cap’s at a level similar to a large scale management wage they can’t see that the added risks of contract milking make those jobs worth it.

“And that’s fine if it takes into account the risk you’re taking on as a contract milker as opposed to a manager but if it doesn’t you need to be careful,” Amelia says.

As a contract milker you’re responsible for hiring and paying all staff and taking that on is a big responsibility that comes with all the risks of employing staff.

“I think that’s one of the things that holds some people back,” she says.

“That and getting the money together that you need to buy the motorbikes or gear you’ve got to have as well as having to cashflow the wages and costs through those first few months when you don’t have any income,” Matt says.

Amelia was used to dealing with wages and GST but employment contracts, work visas and being responsible for health and safety were going to be new to them.

While they had saved cash and had equity in their stock that could be used as security for an overdraft they didn’t want to be buying a tractor, feed out wagons or major pieces of equipment that could end up being costly to maintain.

“We wanted to keep it simple – wages, shed electricity, shed costs like rubberware and detergent, motorbikes and motorbike repairs and maintenance.”

When the couple were offered a job contract milking 900 cows for Darryl Burn and Louise Pickering near Culverden, dairying returns were looking bleak – the opening forecast milk price was just $3.90/kg milksolids (MS).

The farm owners had drawn up a budget with their farm advisor showing the estimated costs Matt and Amelia would incur including:

They also showed the expected milk production and the contract milking rate they were prepared to pay.

It was a simple fixed rate per kilogram of milksolids contract – no additional percentage to create caps or collars.

“It was such a tough year there was no room to move on the contract but we could see there was potential for the farm to do more than the budgeted production without extra supplement,” Matt says.

And potential there was – by late November they were ahead of budget, season to date, there was a dedicated focus on pasture management, putting all of Matt’s LUDF learnt skills into practice and feeding cows well on high quality grass.

He also managed to lift the herd’s reproductive performance from a 65% six-week in-calf rate to 71%.

In late November the Kaikoura earthquake struck and the farm took on 100 cows that couldn’t be milked on their own farm.

They were with Matt and Amelia from December through to March 14 and, although outside the contracted arrangements, the farm owners agreed they should still receive their $1/kg MS payment for the additional milk coming from those cows.

“We worked through the costs of extra supplement and the extra milk with Darryl and Louise and it was well worth it at a $6 payout to take the cows on.

“In the end we went halves with them
in the profit we made from those extra cows – we’d actually made more than they did out of it but we were happy to square it up.”

The couple have a good relationship with their farm owners so were able to fairly deal with the unexpected situation but they warn that generally as much as possible should be written down and agreed to at the outset of the contract.

“Where there’s a general cost like shed expenses I wanted to have it very clearly spelt out what was included in that,” Amelia says.

They also warn others to get advice and check that costs are realistic.

“We looked at DairyNZ’s economic survey information and DairyBase for this area and worked through it with our bank manager. He pulled it to pieces for us and gave us some good feedback,” Matt says.

“They were really helpful with any questions we had too,” Matt says.

After the first season Amelia says they were pretty close with the costs they had in the budget they’d used in the contract but there were extras and some costs that have risen for this coming season.

“We were under on some – but there’s a few costs that were over or just weren’t in the budget we worked through with the contract – there was no allowance for the cost of visas for staff, paying time and a half on public holidays or an allowance for a relief milker, I end up doing that but there’s no accounting for my time,” Amelia says.

“If anyone breaks something that’s on us – part way through the season we had
a brand new calf feeder damaged,” she says.

If there’s a milk quality grade penalty – that’s on them too – although they were grade free right up until the very last pick-up.

While they could save money on some costs, such as repairs and maintenance for motorbikes thanks to Amelia’s parents who own Canterbury Honda, some budgeted costs did come in higher.

Admin was over budget – including software license fees for tools such as Cash Manager, Pasture Coach, Smart Payroll and Federated Farmers subscription.

The internet and phone costs were also underestimated in the original contract budget.

Other additional costs of doing business include one off set up costs being $600 to set up their company, Four A.M. Dairies, and $1200 solicitor fees to set up their overdraft facility.

“I think you really have to factor in about $5000 for all those kinds of extras,” Amelia says

“We included Amelia’s salary in that – she gets paid monthly – and drawings, although they were minimal,” says Matt.

They also wanted security and took that over their stock which are leased out on three different farms.

By the end of the season the farm advisor estimated Matt had managed to harvest 1tonne drymatter (DM)/ha more and total production was 455,000kg MS with the addition of the 100 Kaikoura cows.

“We won’t have them this season but we’re expecting to do better than the target production of 420,000kg MS with border-dyke coming out and sprinklers (fixed on poles) going in,” he says.

While there was no strictly written up detailed farm plan at the outset of the contract Matt did write up a farm policy which he showed the farm owners and came to an agreement on.

The couple sit down with the farm owners every fortnight to go over the farm’s performance and discuss what’s planned and Amelia takes the minutes.

Matt emails a report every 10 days to Darryl and Louise with updates on milk production, cow numbers going into the vat, pasture cover, feed on hand
and anything that needs servicing or repairs.

Farm advisor Helwi Tacoma also has 10 visits a year and meets with Matt, Darryl and Louise and while Matt’s making day to day decisions managing the farm there’s still a level of control over the big picture on how the farm system runs.

Although they’ve set up the company and pay Matt a wage they’ll still be hit with a tax bill this year.

It pays to talk to your accountant about this right from the start so you can factor it into your accounts and cashflows, she says.

By diversifying – having off farm income from Amelia’s wage and livestock trading, generating sound profits by minimising risk are key if you’re planning on going sharemilking or into an equity partnership in the future because the bank’s going to want to see that you can make a profit and repay debt, she says.

The couple has re-signed their contract for another two years and say being able to realise the potential they saw for production on the farm has certainly meant contract milking was the best step for them rather than management.

Ultimately they want to own a farm either on their own or with an equity partner.

“I think if we were to be looking for another job – contract milking or sharemilking we’d want to make sure there was upside in the production,” Amelia says.

Whatever the options getting sound advice, understanding your financial situation and being realistic with any budgeting as well as ensuring everything is in writing and that you can actually get on well with the farm owners are all crucial to successful agreements.

While the pair say contract milking has been a great step there’s no doubt their hard work, sacrifice and focus on doing a great job has been a big part of their achievements to date.