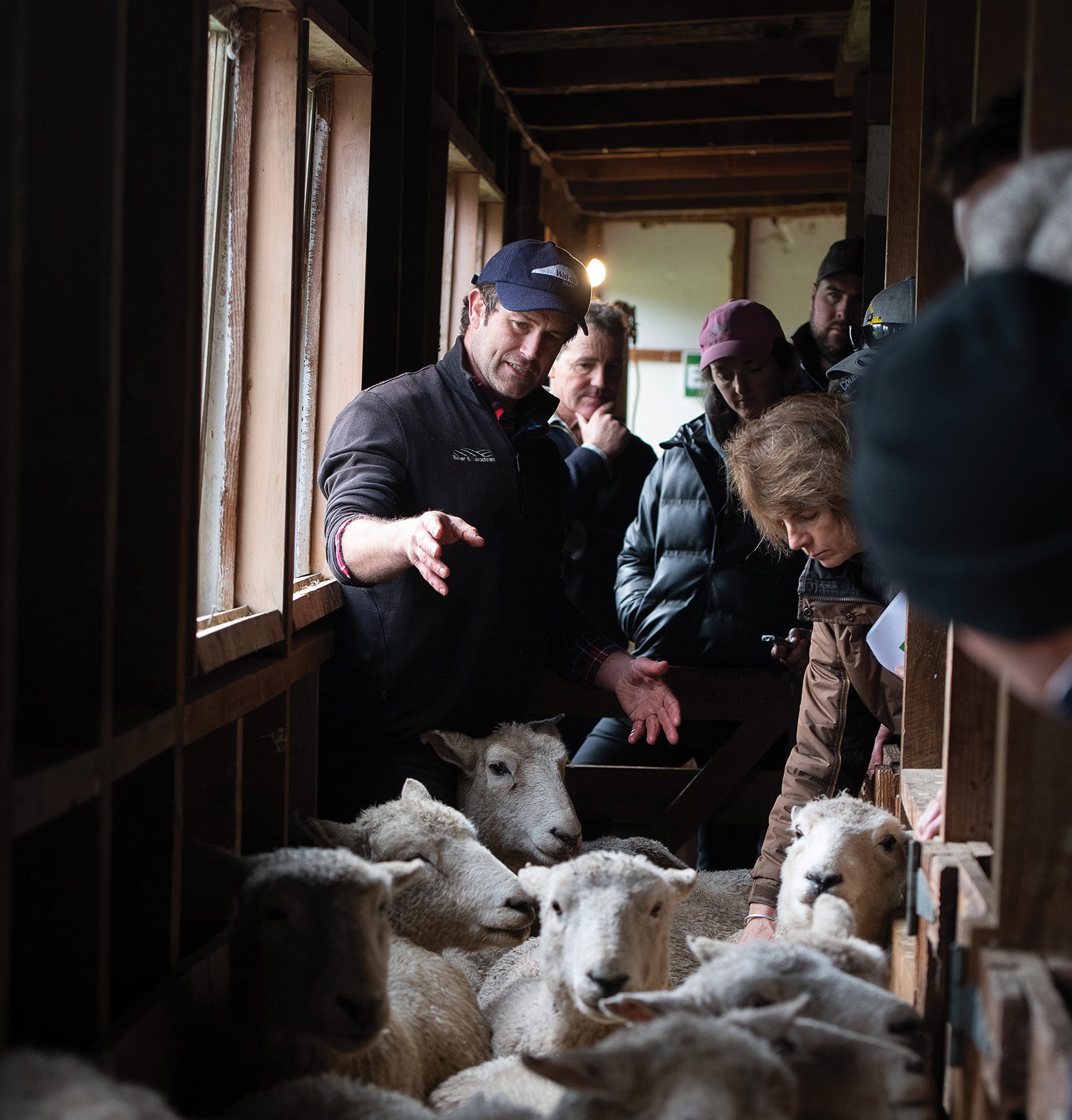 Ewe body condition is the most powerful profit driver in a sheep production system and unlike many objective measurements taken on sheep is cheap to assess, requiring only a farmer’s valuable time.

“If there is one thing that drives sheep production more than anything else it is ewe condition,” Sully said.

Sully and his wife Katie run two farms in the Wairarapa (one summer-dry and the other more elevated and colder with a higher rainfall). They are strong advocates and users of condition scoring.

“There are a million good reasons why you want to get into condition scoring and understanding what it does,” Sully said.

BC scoring allows farmers to generate more profit from the same amount of feed or use less feed by allocating it to those ewes that will give the best return. It identifies those lighter ewes that need preferential feeding, those ewes that need maintaining and those that should be culled because they have not responded to better feeding.

“Using an average BCS for a flock can be misleading because it doesn’t give a breakdown of the numbers of ewes within each BCS class hence doesn’t enable a farmer to apportion feed to the class that gives the best economic response,” says Professor Paul Kenyon from Massey University.

“For example: Two farmers can have ewe flocks with an average BCS of 3. Farmer 1’s ewes may all have a BCS of 3 and farmer 2 may have 50% of ewes with a BCS of 2 and 50% a BCS of 4. Farmer 1 only needs to feed his ewes maintenance while Farmer 2 has a significantly higher feed requirement if he is to achieve similar results to Farmer 1 because of the extra feed he has to supply to the 50% of his ewes with a BCS of 2 and he’ll be wasting feed giving it to ewes with BCS 4.”

BC scoring assesses the amount of body fat or condition by feeling the spine and associated horizontal processes along the loin area.

Assessed using a score from 1 to 5 (with 1 being the thinnest and 5 being the fattest) the single most important factor influencing the profitability of a ewe flock is the percentage of ewes in a flock that are below BCS 3 at mating and lambing. The higher the percentage, the lower the profitability so the best bangs for bucks on feed is achieved by lifting the lowest BCS ewes assuming they are otherwise healthy and are able to respond to better feeding.

“The figure to focus on is BCS 3 however you don’t want to go overboard and have too many over BCS3.5 ‘cause you’ll start killing them with kindness. Also the scanning percentage plateaus above BCS3.”

BCS is a way of comparing sheep that relates strongly to production ability unlike body weight which can be influenced by things like gut fill, stage of pregnancy, breed, frame size and wool.

The most profitable thing you can do

To move a ewe from BCS 2 to BCS 3 requires an additional 30kg drymatter above maintenance and the return on this 30kg amounts to 54c/kg DM compared with winter lamb trading of 25-35c/kg and dairy cow wintering of 30c/kg, Sully said.

“This is probably the most profitable thing you can do on a sheep farm.”

The Alsops believe the two most important BCS in the sheep breeding calendar are at mating and lambing and should be as close to 3 as possible.

“A lot of people believe the start of a ewe’s production cycle starts at mating, however we believe this is wrong. We believe it starts at weaning because between weaning and mating is the only period during which we are not asking a ewe to produce something like growing a lamb.”

So the Alsops begin their BCS programme at weaning after the ewes are shorn.

“You can spend a whole lot of money on EID tags and weigh crates but BCSing at weaning and responding is where you can make some serious money.”

BCS at weaning results in light-conditioned ewes being separated from the heavies with the former being preferentially fed and the latter going on a diet. If ewes are not differentially fed after weaning, feed is wasted lifting ewes whose BCS is already at three or above. This feed is better allocated to those whose BCS needs improving.

“Never cull ewes on BCS at weaning because you don’t know what they’ve produced. In doing so you may well be culling your more productive ewes.”

The Alsops’ ewes are BC scored three times between weaning and mating, one of these being sometime during January when they are brought in for dipping.

“If you can get above BCS 3 at mating it gives you a bit of a buffer for later on in pregnancy if you stuff it up.”

Sully believes that it is invaluable having a bit more condition on a ewe at mating because if she is mated at BCS 3 she can’t afford to lose any more condition before lambing.

Observing the 20 golden days (10 days before and 10 days after the rams go out) of mating is vital if a good scanning percentage is to be achieved. Ewes are shifted every day for 20 days during this period.

“We haven’t had a scanning failure since we’ve been doing this. It is the second most valuable thing you can do to get good scanning results.”

Ewes must maintain weight in last days before lambing

Ideally ewes cannot afford to lose any weight within the last 30 days before lambing.

Sully said this is because a chemical (ketone) called beta hydroxybuterate is released when a ewe’s energy balance is in deficit in the last month of pregnancy. The clinical effect of this is a condition known as ketosis which can be fatal. The subclinical effect reduces a lamb’s vigour at birth making it slower to get on its feet to get its first drink affecting its survivability.

“Ewes bearing multiples and especially thin ones need to be prioritised to minimise this risk.”

Underfeeding ewes in the last month of pregnancy also results in a poor lactation response.

“We should be feeding our ewes like dairy cows to achieve the highest peak lactation possible as this affects total milk production and levels of colostrum which contain vital antibodies for the lamb. Milk is the best quality feed a lamb will get in its life so if it is underfed its growth rate will be impaired.”

So between the end of the 20 golden days of mating and this point (30 days before lambing) there are 110 days of winter to negotiate.

“If a large percentage of the ewes have taken the ram within the first 10 days of mating you can really shut them down hard particularly if they are in good condition. This allows you to get out to a long 70-day winter rotation and build some good winter covers.”

Sully’s philosophy is the sooner the winter rotation can be initiated the better because if it’s left too late the last 30 days before lambing becomes compromised.

“It’s better to screw ewes down as soon as possible after mating and push this feed forward to late winter/early spring when you can’t afford to lose ewe condition.”

BC scoring ewes again at ram removal and scanning allows the light and heavy ewes to be identified and fed accordingly.

“BCSing at scanning is easy because they’re in the scanning crate anyway so you’ve only got to talk nicely to the scanner to get them drafted.”

By lifting ewes’ BCS from 2.5 to 3 between scanning and lambing results in fewer ewe deaths, better lamb survival, better lamb weaning weights and fewer lambs to finish in the autumn, heavier cull ewes and better ewe weaning weights. These all lift a ewe’s GM by $27/ head requiring an extra 41kg DM above maintenance giving a return of 66c/kg DM.

If all goes well during the winter and the Alsops have been able to get out to a 70-day rotation after the end of the 20 golden days of mating there are 40 days left before the final month of pregnancy. This is the period when the pressure starts to come off the multiple-bearing and lighter ewes in readiness for the final 30 days before lambing. During this period the ewes are broken down into smaller mobs of single, twin and triplet-bearing ewes and covers are evened up in readiness for lambing.

Sully says ewe condition is more important than lambing covers. However the Alsops’ goal in spite of rarely (if ever) achieving it is the magical 1400kg DM/ha.

He believes there are three important components to successful lamb production in order of importance; ewe condition, lambing covers and quality feed for lambs to transition on to from their mothers’ milk. He suggests a conflict exists between the last two, the reason being that if the lambing covers are too high it is difficult to maintain quality feed for the lambs to transition on to. Many farmers overcome this challenge using cattle.