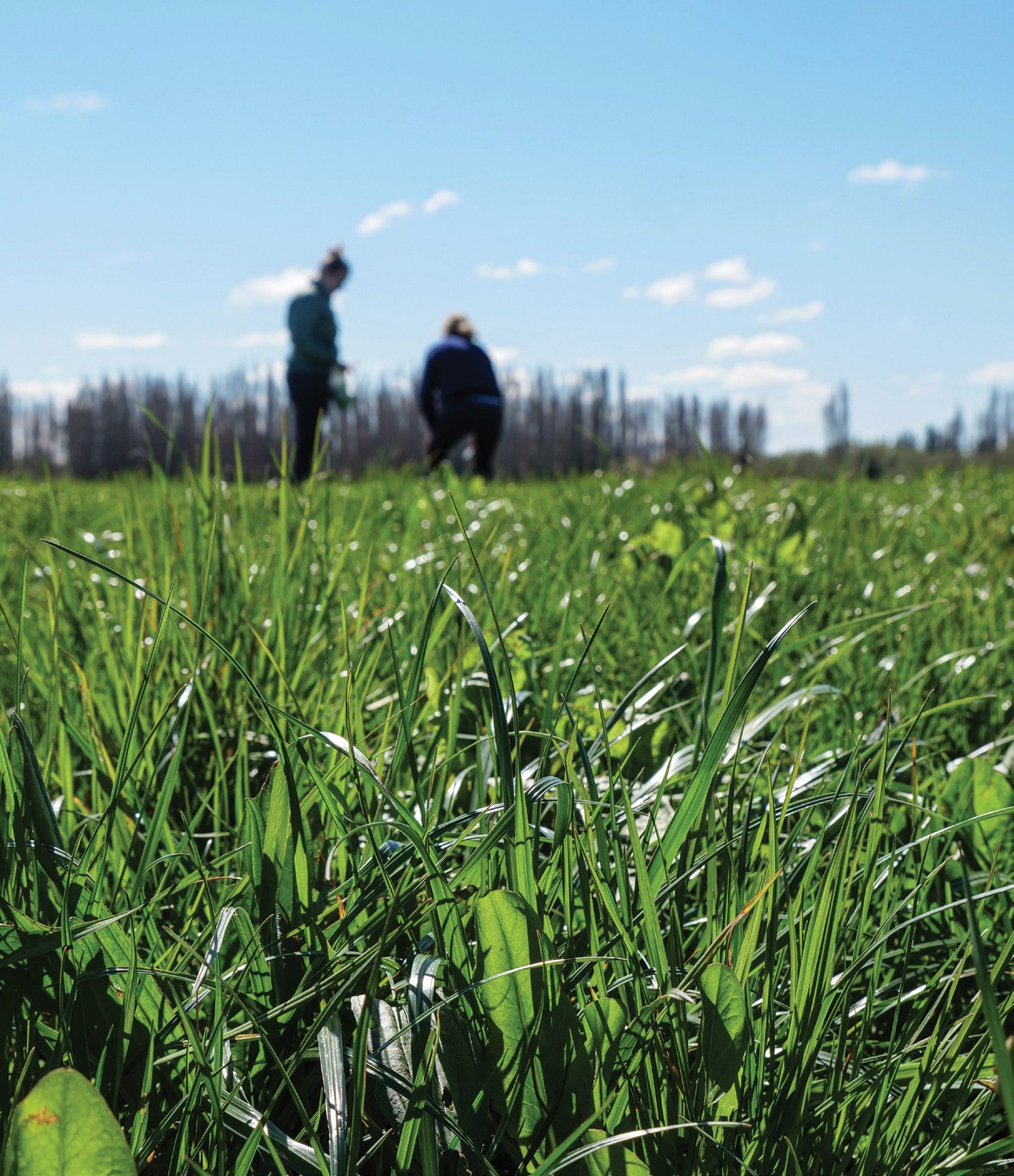 Anne Lee checks in on progress with Align Farms’ comparative testing of regenerative and conventional practices.

Two years ago, Rhys Roberts would have told you cutting out synthetic nitrogen (N) altogether was one of the biggest concerns he had about the fertiliser aspect of Align Farms’ regenerative study. 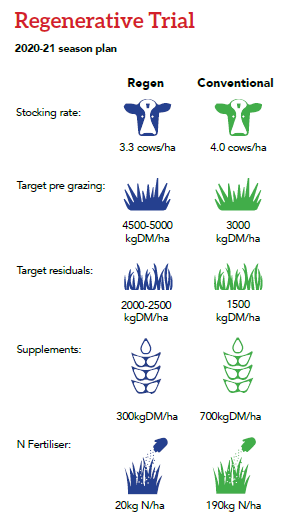 “I wasn’t worried about the P (phosphorus) and K (potassium) but I was really, really worried about dropping out the N,” the farms’ chief executive says.

“But now I’ve done a complete 180 on that. I’m not worried about dropping the N out on the regen side of the farm but I’m a bit dubious about the P and K.”

Align Farms has embarked on a side-by-side study, running 148-hectares or half of its 296ha Clareview farm at Westfield in Canterbury using regenerative practices and the other half more conventionally.

The major differences are:

“We were putting 280-300kg N/ha on in days gone by and now we’ve even got our conventionally run farms down to 150kg N/ha in some cases.

“The diverse paddocks here are just about infested with legumes so they’re fixing a lot of N.

“They’ve had no synthetic N now for more than two years and we’re just not seeing a problem.”

Clare Buchanan is Align Farms’ head of environment and innovation and says the fertiliser regime on the regenerative side of the farm is aimed at feeding the soil biology – specifically the bacteria and fungi which are then a food source for other microbes such as nematodes, protozoa and micro-arthropods.

Soil biologists recommend a 1:1 bacteria:fungi ratio for grassland ecosystems to function optimally, but agricultural soils tend to be bacterial dominated, she says.

“Fungi are the micro-organisms with enzymes that can mobilise minerals from the crystalline structure of soil and transport them to roots in plant available form, so increasing the ratio is a priority.’’

Some nutrients that aren’t plant-available in the soil can be released and made available by the actions of fungi, she says.

The soil biome and what’s really going on down there could be seen as the last frontier with new organisms and processes being identified all the time.

“There’s so much yet to be learned – we just don’t know what’s happening – no one does. It’s been in the too-hard basket along with soil carbon but the world is reaching crisis point and scientists are seeing the need to study it more urgently now.

“We’ve got scientists on one hand who just dismiss regenerative agriculture practices and say they don’t work. They say managing soil fertility is simply ab “Then on the other hand we’ve got scientists who say there are 100,000 years’ worth of nutrients in every soil on the globe.

“If we can get the micro-organisms and plants interacting correctly and not being impeded by inorganic inputs we may get totally different outcomes that the conventional farming world has never seen because of the management practices they’ve been implementing.

“Just because someone is an expert in soil chemistry doesn’t mean they understand every aspect of soil and how it lives and functions.

“There’s a whole lot of unknowns down there and we need to have an open mind about what will work and try these different practices especially when they could help farmers comply with increasing environmental regulations that are proving challenging,” she says.

“What we want to find out in the fertiliser space by doing this study is to: one – find out if we can cut out the conventional inputs and still get the production outputs and what that does to our soil fertility over time,” Rhys says.

“Secondly, we want to know what is an adequate amount of inputs to keep the balance and can those inputs be things like compost and more natural forms.

“What I’m really interested in are the trends – I just want to see them heading in the right direction over time,” he says.

He admits to feeling a bit dubious about the effects some natural soil additions could have on making P and K available, but he’s keeping an open mind.

“I’d be lying if I said I thought some of these things will be game-changers but I fully support checking them out and I’ll be happy to be proved wrong,” he says.

They’re using guano, sulphate of potash and elemental sulphur to bring in their P, sulphur (S) and potassium (K).

The two brews will be alternated and in total the diverse regenerative pastures will get seven applications as liquid dressings applied by contractors Fert Solutions using a Tow and Fert spray system.

All up, fertiliser costs on the regenerative area will be $79,000 or $533/ha with the crop stimulants making up $357/ha of that. Recommendations for both sides of the farm are carried out by Canaan Ahu of Agrownomics. He’s been the company’s soil consultant for several years and arguably the conventional recommendations aren’t always what you might see from your typical fertiliser rep.

The farms have moved away from superphosphate and have been putting on guano. They’re still using fertilisers such as serpentine super and sulphate of potash along with urea and Ammo 36, a combination of ammonium sulphate and urea. There will be one annual dressing of guano, two applications of serpentine super and three applications of sulphate of potash. The Ammo 36 will go on in the spring and the urea will be spread using the Tow and Fert in liquid form over the season. Rhys says Canaan acts in a third-party capacity and bases recommendations on soil test results from Brookside Laboratories based in the United States and is now also using Eurofins in New Zealand. out putting back what you take out and it doesn’t matter if that’s a synthetic fertiliser.

Rhys says the soil testing is carried out at 10cm depth rather than 7.5cm so that does impact the ideal ranges.

“We want the study to be robust and we don’t want it to get hijacked by people focusing on side issues so we have to explain some of those differences but again it’s about watching trends over time,” Rhys says.

The study will be monitoring what’s happening in the soil to microbial populations to see what effects if any the different fertiliser regimes might be contributing to.

There won’t necessarily be any conclusive cause and effect answers because the change in plant diversity between the regenerative and conventional areas may also contribute to changes.

Clare says they will use several tools to look at the differences.

The effect on soil biology is being assessed using both Soil Foodweb New Zealand analysis and AgResearch. 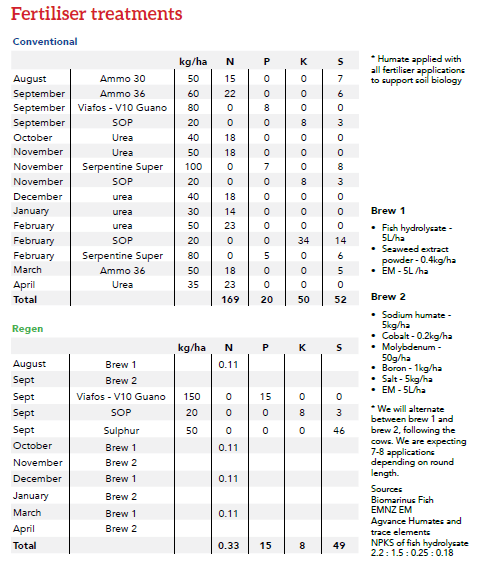 The Soil Foodweb analysis will give counts of bacteria and fungi, ratios and the percentage of the microbes that are actively working in the soil. It also assesses whether they’re sufficient and looks at mycorrhizal colonisation in the roots and anaerobic and aerobic microbe numbers to make soil health assessments. AgResearch is carrying out nematode assessments and looking at what the population of fungi-eating nematodes is compared with those that eat bacteria. Monitoring plant and animal production will also give an indication of how the two fertiliser approaches compare.

Clare has been working with 5th Business Agri carrying out plant assessments for a DietDecoder report.

Herbage samples are taken and analysed for nutrient levels including trace elements and nutritional supplement advice provided. Results from testing the diverse and conventional wintering crops is on Align Farms’ website along with weekly monitoring reports of milk production, pasture covers, round lengths, supplements, nitrogen applications, somatic cell counts and percentage of the herd treated for animal health issues.

Milk foaming has been an issue for the regeneratively run herd through spring and early indications are that it could be related to proteins in the milk.

“It’s something other regenerative farmers have seen before so we’re looking into it more.

“There are some differences in milk composition we can see from the basic milk test information but we’re not sure that’s the answer,” Rhys says.

The farm team has a science advisory board to help ensure robustness of the study so that all farmers can relate to it and it answers the typical questions farmers have.

“We have started to get quite a bit of interest from some top conventional farmers who just want to understand more about what we’re doing here,” Rhys says.

“We may not answer every question using this study and I think we’ll probably find there are more profitable farming systems but when you take the whole gambit of factors into account – and let’s face it we’re going to have to – like environment and people and wellbeing this may come out on top.” 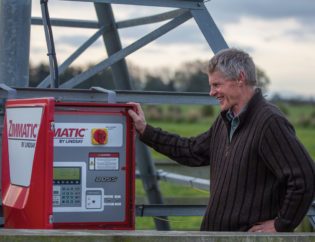