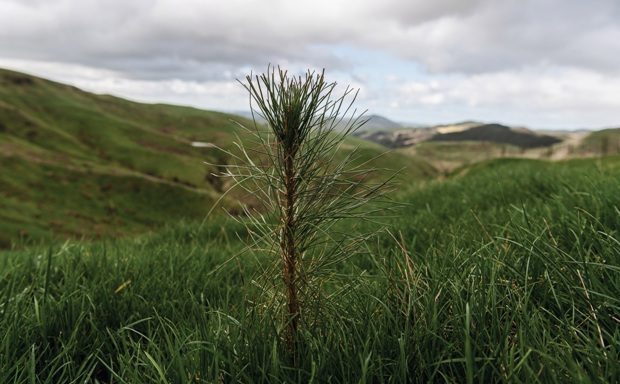 Like many small rural communities in New Zealand, Tiraumea has been declining for years. De-population has been exacerbated by farm amalgamations and technology, and concerned locals fear the recent flurry of farm sales to forestry may prove the final nail in the coffin. Rebecca Harper reports.

Blink and you might miss it. There’s not much left in Tiraumea, located on Highway 52 between Alfredton and Pongaroa, in the Tararua District. Once a thriving rural community, mostly sheep and beef farmers and their families, numbers are dwindling.

The school closed in 2012, though the lone 100-year oak stands proudly in what used to be the school grounds. The hall is still there, along with the rural fire service shed and domain, but that’s about it.

In the last year a number of farms have been sold, either to forestry or manuka, with no new families moving in to replace those lost, and those left are concerned about the impact of mass pine tree plantings.

Robert Liverton has lived in the Waihoki Valley, Tiraumea, all his life. The fourth generation of Livertons to farm Pakowhai, his ancestors were the original settlers of the property, some 150-odd years ago.

Pongaroa was the go-to area for young people wanting to buy a first farm, how do you continue if that first step is gone?”

While Robert and his wife Pat have no plans to sell to forestry, he admits the thought of being surrounded by pine trees is unappealing.

“If every farm around us goes into forestry then it becomes a very unattractive place to live, socially and environmentally, not to mention in 30 years when the logging trucks come.”

On their road alone there used to be seven farms, of those only three remain sheep and beef farms.

“De-population at Tiraumea is an example of what has happened to other communities, our school has closed, and it’s been happening for a while with farm amalgamations and technology, but this will accelerate it. It’s the end. It just destroys communities and it’s snowballing. It’s hard to believe what’s happened. Old established families have gone, to trees.”

Robert does not believe there is any ill feeling towards those who have sold to trees. “Those people wanted to sell. A lot had been for sale for a long time.”

But with the carbon price and forestry driving farm prices up, it is almost impossible for those who would like to buy these properties and continue to farm them to compete.

Another local farmer, Rob Thorneycroft, who was able to buy his first farm in the area and turn it into a profitable farming operation, winning the prestigious Wairarapa Farm Business of the Year Award in 2015, believes the opportunity may now be gone for other young farmers wanting to follow in his footsteps.

“One of my big concerns is young people looking for an opportunity to get into farming. The land here is of good economic value because of the distance from town. The forestry guys are taking out young families looking to come to our community and it just snowballs from there.”

One of the farms sold has a young couple living on the front, more productive part of the property and continuing to farm it, while the harder parts will be planted, perhaps this compromise could be employed on other farms in the area.

No one disputes some of the farms sold would be best-suited to planting in pines, but some are good productive farmland.

“What if the market for wood diminishes? They’re not going to harvest them if there’s no money in it. Who can say what a commodity’s value will be in 30 years,” Rob says.

Brendan White is a younger farmer in the area, he and wife Emma recently bought the family farm, Balmoral, from Brendan’s father. Brendan is on the board of trustees at Pongaroa School, about 20 minutes down the road, where most local children now attend.

“It has to affect the school. All those farms could have had families with children come back in. We were solid with three teachers, but we had 20 children leave and now we’re struggling to keep the third teacher – that can only get worse.

“Less farmers, less shearing, less fencing, less people stick around Pongaroa, which is a rural service centre. Pongaroa was the go-to area for young people wanting to buy a first farm, how do you continue if that first step is gone?”

The village of Pongaroa is home to about 300 people, many working as casual labourers or in shearing gangs on farms in the surrounding area, as well as servicing local farmers, contractors and passing tourists. Recently, the community has banded together to build their own fuel stop, with the help of Allied Petroleum.

Although isolated, it has retained a strong community and facilities, with a pub, shop and farm centre, as well as the school and early years centre. There are golf, squash, rugby and gun clubs.

Erin Rountree and her husband Zane own and operate the local Pongaroa Farm Centre. Erin grew up on a farm in Pongaroa and, though she has left over the years, she’s always come back again.

“There’s great people and I’ve always said, as a community, we don’t miss out on much. It’s an awesome place and there’s always something going on. There’s always been work and something to do socially, be it squash or a good group of friends to ride horses with.”

Erin has worked at the farm centre for some time and the couple bought the business from Erin’s mum last year.

Most of the business is rural supplies, with dog food a big component, but they sell everything from dishwashing liquid to wool packs.

“I want to be able to supply things for the locals – it’s just a great place with great people. The majority is rural supplies but there’s also things like a can of Milo for the locals in the village.”

She is concerned about the number of farms being sold to forestry and the impact it could have on her business, and the community.

“We can handle a bit of change, but the number so far and there’s probably more to come, it cuts out the opportunities for young families to come into the district and do what our parents did 20 years ago.”
While she says the forestry companies have supported the farm centre, purchasing things like culverts for their new tracks and gear, like work boots, she knows that gain will be short-lived. “It’s all good for now, and I do appreciate it, but once it’s done, it’s short-lived – farmers are long-term.”

Locals had hoped the forestry might provide some new work opportunities, but she hasn’t seen any evidence of that.
“It’s just the fact that all this land will be planted and pretty much for us, end of story. None of us will get anything out of that land. It would be nice if it was natives rather than pines. I just wish they would stop buying around here.”

Back in Tiraumea, the farmers are also worried about what will happen to Pongaroa.

“It’s going to destroy Pongaroa, the school, the village. It’s just a nail in the coffin. What was Tiraumea has become Pongaroa, and this will only accelerate de-population,” Robert says.

They all want answers from the Government. What numbers have they done and have they actually visited the areas at the coalface of this change, what will happen to the trees in 30 years, how will the roads be affected, what about the fire risk?

If all that remains is a useless exotic tree wilderness, what future will the community have, and where will the next Rob Thorneycroft come from?