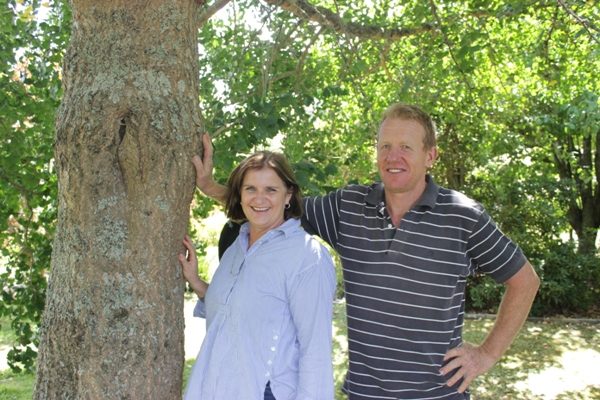 Beef performance has lifted significantly on a King Country farm, thanks to a distinctive breeding programme. Mike Bland reports.

A multi-coloured herd combining the benefits of Angus and Limousin genetics is driving beef production on Philip and Pauline Gaudin’s King Country farm.

Beef performance on the property has lifted markedly in recent years, thanks to a breeding programme aimed at producing high-yielding, fast growing progeny that perform well on hill-country.

Philip’s parents Geoff and Vivienne bought the original farm, south of Piopio, in 1973 after moving from the Wairarapa. In the early 1980s they added another 350 hectares of hill contour but this was sold last year to fund the purchase of a 450ha effective finishing unit (see below).

‘Dad was running a 75:25 ratio, which was fairly common at the time. This year, with the new block coming into play, we will be looking at something closer to 45:55, so the weight has definitely shifted in favour of cattle.’

Philip, a Lincoln graduate, returned to the farm permanently in 1992 and ran it with his parents until they retired about 10 years ago.

The “home block” (Philip says he never got around to finding a name that really suits the property) totals 470ha, of which 360ha is grazeable. The balance is mostly native bush. About 120ha of the effective area is easy-rolling contour, 150ha is medium hill and the rest is steep.

While many sheep and beef farmers have moved away from breeding herds, the Gaudins have always run cows, though numbers have varied over the years.

“Dad had a pretty traditional herd up until the early 1980s, then he brought in a Limousin bull and put it over the Angus and Hereford cows.”

Philip stuck with the cows while also rearing up to 200 Friesian bull calves a year. In the early 2000s he and Pauline decided to focus solely on beef cattle.

“We weren’t really making enough out of the Friesians and they were harder to manage than the beef bulls. So we dropped the Friesian bulls and lifted cow numbers instead.”

Cow numbers were increased from 230 to 250 last year, and most of the cows are now either Angus or Limousin-Angus. The herd includes about 60 heifers mated to an Angus bull to maintain the Angus influence. Most of the mixed-age cows go to a Limousin. As a result, the herd features a mix of black, golden red and caramel cows and heifers, depending on which breed dominates the genetics.

The herd is run alongside a flock of 3000 ewes. Mixed-age ewes are mostly Romney and the two-tooths are Coopworth-Romney. This season the mixed-age ewes lambed at 140% (survival to sale). Ewe hoggets are mated and half of the ewes go to a terminal sire. The Gaudins aim to finish all lambs, depending on conditions. Supplied to Te Kuiti Meats, this season’s lambs will average more than 18.5kg carcaseweight (CW).

Philip says the sheep to cattle ratio on the farm has changed significantly over the last 30 years.

“Dad was running a 75:25 ratio, which was fairly common at the time. This year, with the new block coming into play, we will be looking at something closer to 45:55, so the weight has definitely shifted in favour of cattle.”

While the economics of running a breeding herd are sometimes questioned, Philip is convinced beef cows are a good fit for the farm because they enable him to operate a simple, self-sufficient system. And he much prefers finishing his home-bred cattle to trading stock.

Every bull and heifer calf is tagged at birth, and Philip and Pauline run their own recording system that enables the identification of the best cows and sires.

Calves are weighed every six to eight weeks over winter, and cows are weighed at weaning in April to measure efficiency.

“Our cows are not huge-framed animals, but they are good converters of grass to red meat. Ideally we are aiming for an average cow weight of 480-500kg because at that weight they are not going to cause damage on the hills. Anything that is too heavy in relation to calf weight is culled.”

Careful breeding management and the benefits of hybrid vigour mean the Gaudins can finish all their bulls by 20-months of age.

Philip says Limousin-Angus cows are a perfect fit for the farm, combining the hardiness of the Angus with the muscling of the Limousin to produce fast-growing and high-yielding progeny.

“Our average dressing out percentage is 58% that’s very good considering the type of hill-country we farm on. An additional benefit of the Limousin is that you get that muscling coming through. Some of our Limousin-cross bulls dress out at up to 62%.”

Philip believes the Limousin influence also brings longevity. “We’ve got a Limo bull here that’s nine years old and some of our cows are up to 16.”

And old stories of Limousins being ‘wild’ have never rung true.

“We’re careful when tagging the calves around their mothers or working with the bulls, but temperament-wise they are very quiet animals and we’ve never had an issue.”

The Gaudins buy an Angus bull every second year and a Limousin every year. Angus bulls are sourced from Seven Hills, Wairarapa, and Limousins come from Snake Gully, Northland.

Philip says they’ve been buying from Snake Gully for 19 years and from Seven Hills for over 25.

“Some people might say that’s a lot, but to me its great value for money because we know we are going to get the carcase gain out of the progeny and that’s what we get paid for.”

Heifer mating starts from December 10, with the Angus bull going out for two cycles and the Limousin going out over the mixed-age cows from December 20 for two-three cycles. Heifer calving starts from September 20 and the mixed-age cows start on October 1. Cows are calved behind a wire on the easier contour and after weaning they are rotated around the hill-country in mobs of up to 100.

In late Spring and early Summer the cows are used principally as a pasture control tool, mostly on the medium-hill contour.

“We make them work hard and they do a great job of tidying things up. Breeding cows are a real asset when it comes to pasture control and that’s a value that’s hard to quantify.”

Philip says the low-birth weight of the Limousin means calving difficulties are rare.

“So apart from tagging the calves, we pretty much leave the cows alone.”

Weaner bulls start off in mobs of 50-60 and by mid-winter that is reduced to 25, based on weight and colouring. They stay in this mob until finishing and are wintered at 2.5bulls/ha.

About 5-6ha of chicory is grown on the home farm and this crop may be used to help finish some of the bulls. But the majority are finished on all-grass, generally on two-day shifts.

No other supplement is made on the farm.

All bulls and heifers go to ANZCO Foods.

The Gaudins finished 110 bulls this season. With an extra 20 cows on board they will finish about 120 next year.

While Philip is very happy with the growth rates achieved by the bulls, he says he would consider steering the young males if the economics stacked up.

“It would all depend on the offer put in front of us. We’d have to be confident we could make a good margin and finish all the steers within 20 months.”

But he would stick with the current Limousin-Angus breeding policy.

“I can’t see any reason to change. We are definitely getting the results from our current genetics and hybrid vigour. Limousins are the best-kept secret.”

Buying a 467ha last year increased the size of the Gaudins’ operation to 800ha effective.

But, more importantly, the addition of more finishing contour to their sheep and beef operation gives them extra flexibility and the scale to employ labour.

Until recently Philip ran the home block mostly on his own, with Pauline working off-farm as a pharmacist. The couple have three daughters, Charlotte, Harriet and Emelia, who are all at university.

The Gaudins had been considering expanding their operation for some time, and when the “new block” came on the market, they decided it was the right time to buy.

“We’d had three dry years and were getting tired of having to offload store lambs because we didn’t have the contour to finish them,” Philip says.

The new block was a former bull unit and it had much better finishing country than the home block.

Just outside Aria, the new block has 200ha of cultivatable contour, with the balance of the 450ha effective mostly medium-hill. To help fund the purchase, the Gaudins sold 350ha of steeper hill contour near the home farm. They took over the new block in December last year.

Philip says soil fertility is good, but a lot of work is required to re-fence and re-water the block.

Late last year he employed Steven Manson to manage the new block and he is enjoying having someone to work alongside.

“Steven’s helping us develop the new block and he also helps out with the stock work on the home block when we need him.”

Environmental work has been a focus on the home block in recent years. Native bush, waterways and stands of kahikatea have been fenced off, and poplar poles planted on some of the steeper contour to prevent erosion.

It’s early days yet, but the Gaudins are already seeing the benefits of adding the new block.

“Until early March we’d only had about 120mm of rain and normally we’d expect 250mm. Both blocks were dry but having the finishing contour on the new block really took the pressure off and we were able to shift the bulls over there in December and keep them growing.”

Last year the operation wintered over 6000 stock units, but Philip hopes to increase this to 8000su this year and up to 9000 within 18 months when the subdivision and cropping work on the new block is completed.

In the meantime the Gaudins are considering options such as trading cattle, winter lambs or a cash crop. “We’re also looking at growing winter grasses to speed up the finishing of bulls and lambs.”

The new block will also be used to finish about 40-50 Limousin-Angus heifers.

“Instead of selling them off in May to August at 240kg CW, we will hold on to them into the spring and finish them at about 290kg CW at two years old.”

vamtam-theme-circle-post
 Category Country-Wide
Crops are a vital tool for the Cooper family’s Top of the South farming bordering...
 Tags Stock
Read More

Making the most of milkWellbeing: Out of a dark place