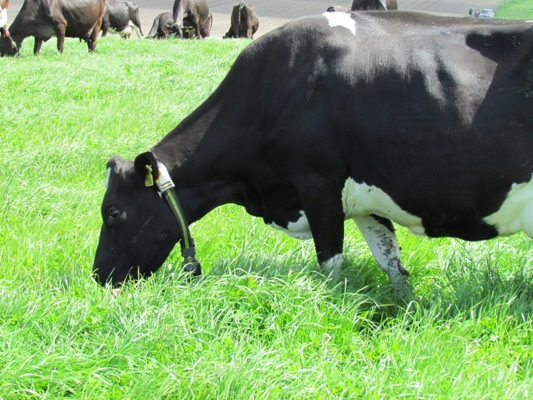 When South Canterbury sharemilker Ben Smith invested in smart collars for his cows he didn’t fully appreciate the extent of the benefits they’d bring.

Buying his herd in the midst of the Mycoplasma bovis outbreak in winter 2017, Smith recalls he and his farm owners were seeking ways to “close the border” to the property just south of Waimate.

“Bulls were our one big weakness, so we started looking around at all the options and realised collars could completely remove the need to bring bulls on to the property.”

That alone was enough to persuade them to invest in collars for Ben’s herd of 430 Kiwicross cows but as they began to realise all the other benefits, they thought they’d better “do the numbers” on putting collars on a larger herd of 830 nearby which he managed as a lower order sharemilker.

‘I’m really looking forward to this calving because we’ve found there’s so much more we can control.’

“Initially we looked at doing part of the herd but then the decision became: ‘if it is good for some of the herd, we should do the whole lot’.”

The SCR by Allflex collars and associated relay stations and Heatime Pro software were fitted and installed just in time for mating last spring on the larger herd, and before last winter on his own herd, where they quickly proved their worth.

Checking his phone first thing in the morning he picked up an increased activity alert from a mob on fodder beet, triggered about 2am. By 6.30am he was in the paddock sorting things out; without the alert it would have been mid-morning.

“We’d already lost a couple and it would have been a lot more if we hadn’t got down there so soon.”

Besides the immediate benefit of limiting fatalities, the rumination readings from the collars meant dozens of sub-clinical acidosis cases were identified which would otherwise have been missed.

“Their rumination had dropped to nearly nil, so we pulled them out on to grass and treated them with calcium, even though they were showing no symptoms.”

Since then, day-to-day during the milking season Smith’s found rumination alerts from the collars mean he’s on to individual health problems, such as mastitis or lameness, much sooner.

“They won’t tell you what’s wrong, but they tell you something is wrong, often before there are any obvious visible symptoms,” he explains.

At a herd level slightly depressed rumination post-calving prompted an investigation with his vet as to likely causes. Blood tests revealed widespread sub-clinical calcium deficiency, which in turn was found to be due to unusually high magnesium content in the farm’s pasture.

“So we removed all magnesium from supplements and started supplementing calcium instead.”

A calcium bolus is now given to all cows immediately post calving and rumination rates are returning to pre-calving levels three days faster than they were previously.

“Our basic rule is we don’t take them out of the colostrum herd until rumination’s back to their pre-calving level.”

Rumination rate is also alerting them to metritis cases much sooner and has highlighted which treatments are most effective.

Coming into mating the collars mean he knows for sure which cows have failed to cycle so interventions are only used where absolutely necessary, eliminating use on cows which had actually cycled but had been missed, and, conversely, picking up ones which might have appeared to be cycling but actually were not.

Submission rate has reduced with the collars because now only cows which are definitely on heat are put up for AI, with no “just-in-case” submissions, he adds.

Workload and stress for him and staff has also eased, in that they no longer have to be out observing the herd for heats during the day, and trying to spot them as they come through the shed. Automated drafting gates as cows leave the shed simply pick out the cows that the computer has picked up alerts on and flagged for drafting.

Six week in-calf rates this season for the two herds were 68% and 69%, on par or marginally up on previous years despite a switch to sexed semen for half the larger herd and a slightly lower proportion of his own 430-cow herd.

“We used four straws a day of dairy sexed semen on my herd, with the balance of the best cows going to nominated AI bulls and the bottom 50% of the herd AI’d to beef bulls.”

“Previously our empties were slightly lower but we shortened the mating period considerably: before we were doing four weeks AI then nine weeks with bulls.”

Smith believes the in-calf percentage in both herds might have been higher but for what he suspects was poor conception and/or some very early abortions to the beef breed he used.

“We got a higher in-calf rate with the sexed semen than all the rest by using the breeding window software in HeatTime Pro and choosing the precise time for AI, which is different for sexed semen.”

This coming spring he plans to go to twice-a-day AI throughout mating, regardless of whether individual cows are up for sexed or beef semen.

“It means we’ll be able to mate more cows in that exact window.”

Besides the benefit of earlier and higher in-calf rates, and consequently more days in milk, it means he will have hardly any dairy bull calves to go as bobbies, and long-term genetic gain in his herd will accelerate as he breeds replacements from only the top 25% of his herd, instead of the top 50%, he adds.

Meanwhile, further analysis of rumination rate at the herd level, with the help of the Centre for Dairy Excellence, is helping fine-tune grazing and supplement choice and allocation.

“I’m really looking forward to this calving because we’ve found there’s so much more we can control.”

As for the financials, he says it has cost about $200/cow to set up each farm with the technology, including solar powered relay stations that transmit data picked up from cows in the paddock back to the computer in the shed. Each relay station has three readers mounted to give 360-degree coverage of a minimum 500m radius.

“It’s a small price to pay for the extra precision it brings.”

Allflex NZ business development manager, Austin Heffernan, says as of late May 60,000 to 70,000 cows in New Zealand were sporting SCR monitoring collars, with about 8000 more to be fitted shortly.

Waikato leads in number of herds, but larger herds in Canterbury mean that region has about the same number of cows carrying the technology as Waikato. Most uptake is on farms where the owners are involved in the day-to-day decision making, running Dairy NZ system 3, 4 or 5 operations.

Within five years he believes 20% of the national herd will be wearing some form of smart monitoring device.

Sharemilking two herds: one 50/50, other lower-order.

Irrigated pasture plus ~250 tonnes palm kernel fed on each farm.