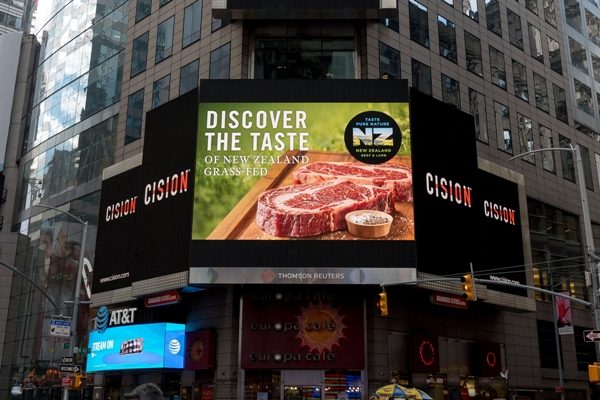 It has been the NZ meat industry’s beachhead in North America for more than half a century.

It is also one of the few examples of collaboration in a cut-throat, competitive industry.

While they fight tooth and nail in the procurement market at home, exporters Alliance Group, Silver Fern Farms and ANZCO come together in the North American market as the largest shareholders in The Lamb Company.

Incorporated in 1964 the Lamb Company held the exclusive license for the United States and Canada until the mid-1990s when the NZ Meat Producers Board abolished the company’s single-seller status and sold its stake to the exporting companies.

Murray Taggart, chairman of the company’s single largest shareholder Alliance Group, said the collaboration had a number of advantages for the companies involved that would be difficult to replicate if they were operating in the market in competition with each other.

‘With the volume we have got, we have managed to justify in-market processing that you probably would not be able to justify if you were operating individually.’

“The beauty of being part of it is you get economies of scale having three parties there essentially sharing the distribution infrastructure.

“There are also advantages in terms of spread of supply throughout the year because we have got a range of plants back in NZ across the three players.”

The Lamb Company has processing plants in Toronto, Los Angeles and Pedricktown near the port of Philadelphia.

“With the volume we have got, we have managed to justify in-market processing that you probably would not be able to justify if you were operating individually,” Taggart said.

The Lamb Company buys lamb on its own account from the shareholder companies as well as non-shareholder suppliers in NZ and Australia.

It first began buying Australian lamb two decades ago but has stepped up purchases in the past 10 years as dwindling sheep numbers and a surge in demand from China meant NZ exporters struggled to keep up with the increased demand from the North American market.

About half of the lamb sold by the company now comes from Australia.

But the Lamb Company is still short of lamb.

Demand for lamb raised on grass and free of antibiotics is particularly hot.

“To the point that I can tell you as a business we are supply-constrained.”

At Alliance Group’s Pure South Conference in Queenstown three years ago Ruffo made a special plea to the cooperative’s shareholders not to forget the North American market in the rush to satisfy China’s voracious appetite for sheep meat.

“I understand what you are doing with Grand Farm but hopefully you’ll keep a bit of product for North America,” he said.

Ruffo will again do the rounds of meat exporters when he is in NZ next month.

It would be a fair bet he will play up the company’s credentials in further processing as he seeks more supply and more shareholders.

Since 2015 the Lamb Company has spent $25m expanding its further processing facilities at its Los Angeles plant, and building a brand new plant near the port of Philadelphia.

A further $5m has been earmarked to upgrade the Toronto plant this year.

The equation is straightforward enough: the more value the company can add to the cuts it buys from exporters the more it can afford to pay more for them and the better it can compete with buyers in China.

But while demand for lamb is outpacing all other proteins its share of the market remains small.

“What the investment in further processing plants has allowed us to do is get product in a form more readily acceptable to North American consumers.”

“Where the real gains have been made is with the legs and the shoulders where we muscle bone them and we steak them and cube them and grind in some cases.

“We have had some long-established retail clients who have been able to increase their portfolio which has grown the business and the category significantly.

“We have also taken on new customers particularly those who do not have the capability to pack and cut in-store – these plants have now allowed us to do that for them.”

Interestingly the investment in more cutting has coincided with a trend among larger customers to do less.

“The largest supermarket operators for a bunch of reasons some to do with occupational health and risk and a lot to do with food safety are taking out those capabilities.”

Ruffo is confident the lamb business will continue to grow but he is also realistic about its limits.

“The reality of availability in current lamb producers and the countries in our case particularly Australia and NZ is going to be a limiting factor for throughput growth but revenue and pricing growth is going to continue to grow.”

That was already being borne out by export statistics.

Ruffo sees more potential for growth from the beef side of the business.

The same shift in consumer preference towards antibiotic free, grass-fed attributes that has powered demand for lamb also applies to the much larger US beef market.

“There is no question because beef is consumed in much greater numbers than lamb that is where frankly the much larger share of growth is going to happen.

“I am not going to put a number on it but it could increase multiple fold from where it is now.”

The brand will mirror the NZ Spring Lamb brand with a similar focus on the grass-fed, antibiotic-free attributes of NZ beef.

So is the Lamb Company destined to become the Beef Company?

“While the Lamb Company does have aspirations in beef you have also got the rise of China and other markets that are swiping a fair bit of beef that used to go to North America.

“The ultimate shape of the Lamb Company has to fit in with that and that is probably more uncertain than it has ever been.”

In the meantime Taggart is confident the recent investment will help the company hold its own on lamb.

“When there is a bit of price tension there it is funny how markets seem to be able to pay a bit more and North America is no different there.”