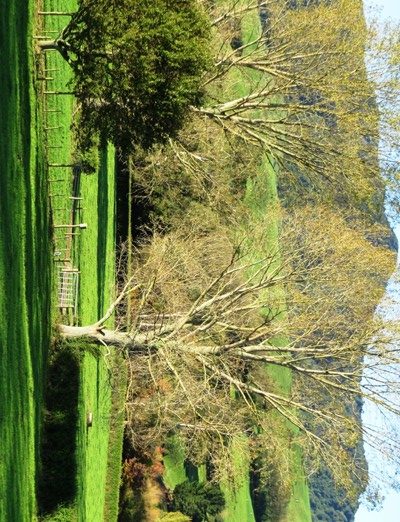 A range of scenarios for climate change make it hard to judge the future on an individual dairy farm in New Zealand, but research suggest it may lead to cattle breeds better-suited to rising temperatures, grazing different pasture species.

Strategic leader for DairyNZ’s environmental portfolio, Dr David Burger, says a key conclusion from its research is that impacts of climate change as well as new practices to adjust, will vary from region to region.

As temperatures rise, cows in traditionally cooler and southern regions may benefit from warmer winters, while cows in warmer parts of the country are going to feel the heat and farmers will have to do something about it.

Hotter temperatures will lead to heat stress with increased incidence of subtropical diseases and problems such as facial eczema in cattle. Breeds differ in their ability to cope with heat and Burger says there is potential to specifically breed for a more heat-tolerant cow, but research is needed to determine the genetics for this trait under NZ conditions.

‘Trees do not compete with grass for water, as grass takes the water it needs from the top of the soil while trees take their water lower down. Cows take advantage of the shade but they still move away to graze – they do not reduce their feed intake.’

Already, some breeds such as Jerseys cope better in hotter conditions than others, while black or dark coats absorb the heat and make cattle more prone to heat stress. A cow that is largely white is more prone to skin conditions affected by sun, such as facial eczema. Which all points to increased mitigation measures in the warmer regions of the country as temperatures rise, he says.

As temperatures rise, shade is going to become increasingly important for stock and already some farmers are catering for that. Recent figures show 15% of dairy farmers have planted trees in the past two years specifically for shade, while many more are planting for other reasons such as biodiversity, to mitigate greenhouse gases and to improve water quality.

“Useful information to be aware of is that trees do not compete with grass for water, as grass takes the water it needs from the top of the soil while trees take their water lower down. Cows take advantage of the shade but they still move away to graze – they do not reduce their feed intake.”

Farmers can also change their milking interval or frequency to move milking and walking to cooler times of the day, plus ensure they are milking efficiently so cows spend less time in the yards. Finding the best solution for milking through hotter summers depends on location and the farming system.

While moving the afternoon milking to a later time in the day when it’s cooler works well in the South Island, Burger says it may not work as effectively in the North Island where it can remain humid later in the day. The important thing is to have options, he says, like shelters for shade during the day and grazing at night.

DairyNZ has a project underway to find out how to provide shade for cows in a pivot system which Burger describes as complex. Research is also being carried out through DairyNZ’s partnership farm project into infrastructure investment such as covered feedpads which could provide cows respite from the sun as well as their primary function of reducing nitrogen loss.

Climate change will bring both benefits and issues for dairy grazing systems, with some areas getting warmer and wetter and other areas drier. If it’s warmer, wetter conditions, then pasture yield will likely increase in some parts of the country. But as it gets warmer, he says there will also be greater problems with growing and maintaining ryegrass pastures, particularly in the upper North Island – with conditions north of Hamilton already outside the optimum for ryegrass.

In general, he says conditions in the North Island and Canterbury will become more suitable for maize production over time, but there will be costs associated with changing land-use activities to suit a new climate. Some grasses adapted to greater warmth are already widespread in the North Island and may move to the South Island over time and that could affect both pasture quality and pasture management for dairy farmers.

Already, there has been a gradual spread of all the subtropical (C4) grasses which differ in the photosynthesis mechanism compared with temperate grasses (C3) such as ryegrass. Burger says this mechanism generally makes C4 more efficient and adaptive to cope with higher temperatures. The most common and productive subtropical C4 grass in dairy pastures is kikuyu and as it spreads, it is going to cause a change in the way dairy farmers manage pastures over time, he says.

“Successful farmers in Northland have been successfully managing kikuyu for milk production for many years. They recognise the positive aspects of kikuyu and minimise the negative. It is more drought tolerant, copes better with pests such as slugs and crickets, and has low facial eczema and grass staggers risk.”
DairyNZ has recently produced a management guide for kikuyu based on farmer experience in Northland.

Maize is also a C4 plant and Burger says it is used to dealing with heat and conserving moisture, so conditions may become more suitable for maize. The problem with maize though, is it’s not a feed with a high protein content so it has its limitations for milk production from dairy cows. It can be fed directly to cows but that is probably not the best fit for getting it into a dairy farm production system and instead it is best used for silage. But that has extra costs for machinery, harvesting and storage.

“So while warming will help with maize yields – that’s positive – the negative is there’s also additional costs involved in transferring that feed around to suit the milk production cycle.”

Other C4 grasses will grow well in a hotter climate, but many are weeds and are a nuisance such as yellow bristle grass and Dr Burger warns against invasions of other weed grasses that are difficult to manage. Often the cows don’t enjoy those weeds either.

Tall fescue is a plant he says should be considered by dairy farmers in a changing climate. It grows well in warmer conditions and is very similar to ryegrass. So far, there’s been no measurable advantage from having tall fescue in pastures compared to ryegrass. But now we’re getting warmer.

With climate change, some areas may get drier as well and he suggests those areas may have to look at plants such as lucerne. Sheep farmers in dry areas have already transformed their farm systems with lucerne, he points out.

“If milk production continues in areas that get drier, there has to be a case for looking at lucerne in dairy areas. The advantage of lucerne is in the dry summer and not the winters. If we can find a plant like lucerne that grows well in low moisture conditions in summer and is useful for winter, that would be ideal.”

While some places will be drier, there’s also the risk of wetter weather in other areas where surplus moisture in the soils for longer periods can be “problematical”.
Cold and wet are not a good combination and there will still be the occasional cold event, he says, but probably less frequent. The C3 plants rely on those cold events through winter to trigger other aspects of their physiology, such as seed development and if there are C4 grasses in the pasture mix as well, it will also create problems for them.

In the South Island, increasing temperatures have advantages because it will mean more opportunity to grow more grass, particularly on the shoulders of the season in spring and autumn.

“Climate change may open up some opportunities that we haven’t thought of yet, particularly where current temperatures are limiting the growth of some of our temperate species. Also note, there may be trees, shrubs and grasses that we can graze that we haven’t discovered yet.”

Irrigating pasture has already led to innovations in technology and a five-year project funded through the Ministry of Business, Innovation and Employment, and supported by DairyNZ, will provide information for farmers that will help them tailor decisions around irrigation scheduling. The technology involves highly detailed weather forecasting that lets farmers know if there is a chance of rain so they can decide if they can hold off irrigating and thus save on water and costs.