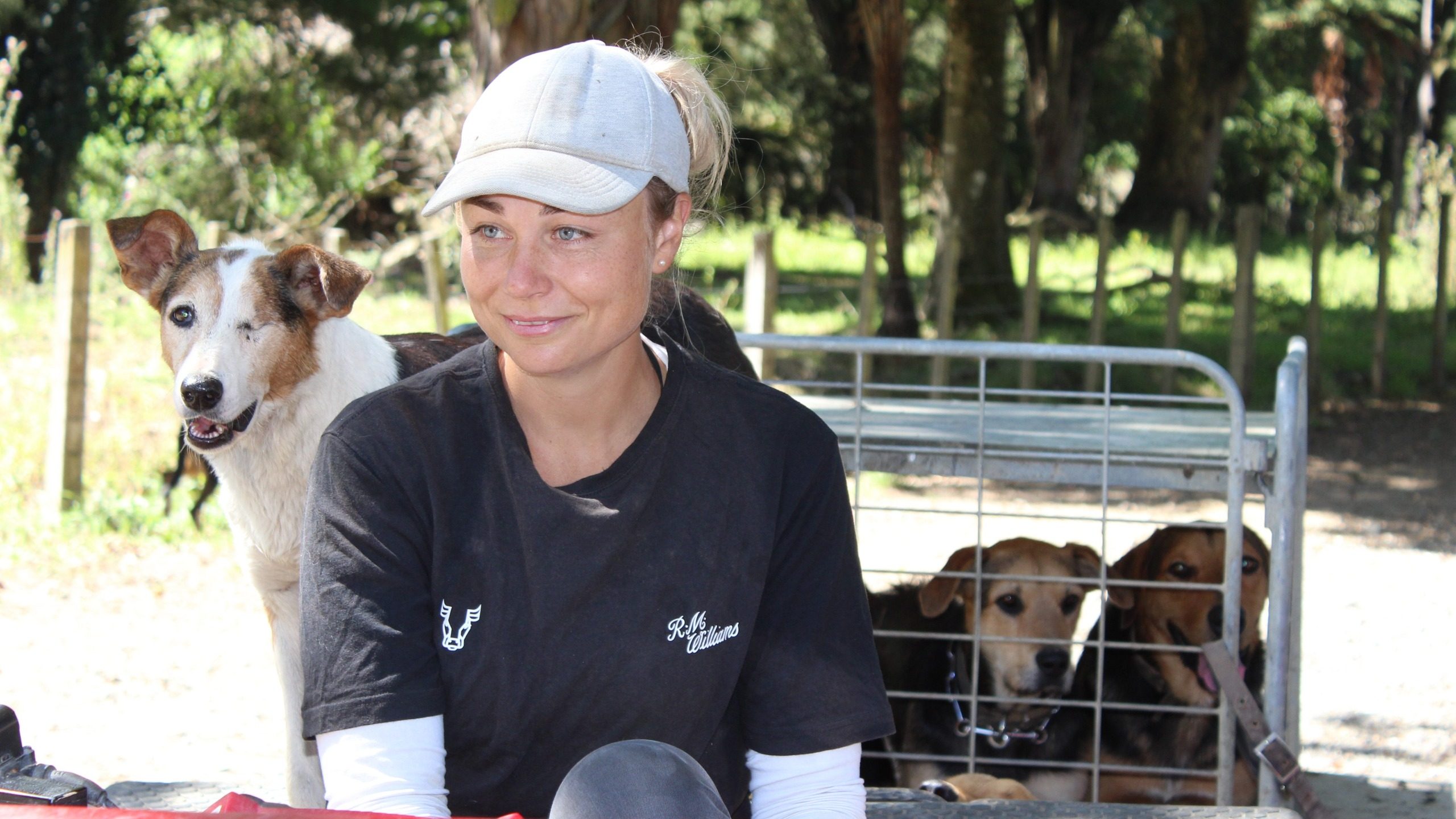 A King Country farm manager and her team have a reputation for finishing good lambs on hill country, Mike Bland writes.

The station has been named Te Kuiti Meat Processors’ lamb supplier of the year for two out of the past four years.

Te Moata totals 1750ha, of which 1550ha is grazeable, with the balance in native bush. About 500ha of the effective area is steep hill and the rest is easy-rolling and medium-hill.

No ewe replacements are bred on the farm and all lambs are finished. Five-year and six-year ewes from other Paparata farms are mated to terminal rams (Poll Dorset), with the six-year ewes culled after their lambs are weaned.

The station usually carries 1500-1800 extra lambs, which arrive in late February and are finished May/June, plus 800-900 dry hoggets (scanned but not in lamb), which arrive in July and are mated the following year as two-tooths.

Rach (34) who has managed the farm for four years, says the dry hoggets are farmed in “tiger country” and a light stocking rate ensures they reach good weights at mating.

She says this year Te Moata carried only the five and six-year ewes as the other farms sold their surplus lambs store due to the drought.

Lamb production is an important part of Te Moata’s operation. Despite its steep contour, farm owner Trevor Johnson says it has some natural attributes that are beneficial for lamb finishing. The hills are a mix of sandstone or mudstone, the terrace country is Mairoa Ash and there are some river silts near the edge of the Ohura River.

Winning the Te Kuiti Meat Processors’ lamb supplier of the year award is a source of pride for the Paparata Group.

He says much of the credit should go to Rach who has demonstrated excellent stockmanship on Te Moata.

The farm is part of the Paparata group (see Country-Wide May Beef 2022) which farms 65,000 stock units on four blocks totalling 7100 hectares effective in the Tokirima and Ohura districts. The blocks are Paparata Station, 2420ha, Tokirima, 1400ha, and 1730ha Heao.

Paparata is owned by Trevor and his wife Trish, a physiotherapist, who live in Hamilton. Trevor bought the original Paparata block in 1968 in partnership with his brothers and later bought out their shares. In 1986 he bought nearby Tokirima – the original family farm which comprised 830ha of hill country, and in subsequent years he added adjoining land between Tokirima and Paparata.

The Johnsons bought Te Moata in 2016.

Rach says lambs are fed on pasture only. No crops are grown on the farm.

“The fact we are only producing terminal lambs really helps. And good genetics are crucial. All the ewes are Paparata Romney, so they are specially bred for this type of country.”

“Facial eczema was a big problem here several years ago but it hasn’t been a major issue for us since Paparata started breeding for FE tolerance.”

Keeping feed in front of the lambs hasn’t always been easy given the farm has had three droughts in the last four years.

In late February this year, after another difficult year for lamb finishers, lamb weights were back by about 1-2kg on the previous season.

“It’s been a very challenging year but not having those extra lambs on board took some of the pressure off.”

As part of a drought strategy, Te Moata ewe numbers have dropped back from 5500 to 5300. And lambing dates have been shifted forward two weeks in an effort to get more lambs away before Christmas.

Trevor says higher summer temperatures and lower rainfall are a challenge for the station.

“Over the last five or six years we’ve seen a big drop in rainfall. We used to expect about 1500-1700mm annually, but for the last three years we’ve had less than 1300mm. So we need to get more lambs away earlier and that’s why we’ve moved our lambing dates forward.”

About 7000 lambs will be finished this season, averaging 17kg CW. The first lambs are picked in mid-December and the rest are drafted off-mum up at a minimum of 16kg CW up until March.

Scanning rates in Paparata’s recorded flock, established in 1980 and run on the Heao block, have reached 180-190%, “which is about the optimum because we want to avoid triplet lambs”.

Paparata sells about 150 rams at an annual sale.

Trevor says the aim is to breed productive sheep that are ideal for hill-country environments.

Hoggets must scan in-lamb to go into the recorded flock or commercial flocks. Those that don’t are mated to terminal sires as two-tooths.

Facial eczema tolerance has been a focus in recent years. To increase FE tolerance, Paparata buys in genetics from studs like Waimai Romneys in North Waikato.

The flock is now building up a good level of FE tolerance, Trevor says.

Five years ago Paparata was finishing about 10% of its lambs before Christmas, but the aim now is to target 20%.

Of the 30,000 lambs the Paparata group sells annually, about half are finished at an average of 17kg CW. The remainder are sold store at 33-38kg LW.

“We could sell more lambs store but the preference is to finish as many as we can. This year’s prime lambs averaged about $140 and the stores about $110, so there is a better margin for us in those prime lambs”.

The bulk of the prime lambs go to Te Kuiti Meats, a decision Trevor says is driven by economics and animal welfare.

“They manage their kill schedule really well. When our lambs are ready to go, they go, and they are killed straight away. They aren’t left sitting around overnight in the yards. A same-day kill is important to us from an animal welfare point of view.”

Te Moata’s 600-cow herd has a strong Angus base and most cows are either Angus or Angus-Hereford.

While the older cows often do it tough on the steep contour, they still produce good calves, Rach says.

And most importantly, they also control rank pasture and provide high quality feed for ewes and lambs.

About 100 to 130 R2 heifers are retained and mated at a minimum of 300kg to bulls from Stokman Angus. Heifers are set stocked around the hills in winter and calved behind a wire on the easier contour in late September.

About 260 steers and non-replacement heifers are sold as yearlings in December, and 125 of the better steers are retained and finished at 24-months between late November and early March, averaging 320kg CW.

Rach says the older steers are set stocked through summer on the lambing country at less than two steers per hectare.

“The aim is to put weight on these steers as quickly as possible and get a big chunk of them away before Christmas to free up feed for the ewes.”

Some heifers may also be sold for live export. This year 100 went away in January.

The older cows, four-years and over, are set-stocked among the ewes at about 9su/ha and calve in November.

Te Moata is Rach’s first farm management role and it’s a job, she says, she is lucky to have.

She grew up around working dogs and horses but wasn’t sure what to do after finishing school. So she went to Massey University where she completed a degree in applied science, majoring in agribusiness.

Her career was decided after she saw a Huntaway advertised for free in Auckland.

“As soon as I picked up my first dog, I knew I wanted to be working with dogs out in the hills.”

Four years ago, while shepherding on Te Moata, she asked Trevor if he would consider giving her the vacant manager’s job. Trevor thought she was up to the task, even though she had virtually no farm management experience.

“Trevor took a chance on me and gave me the job. I couldn’t ask for a better boss. He’s 100% behind me all the time and he’s always happy to listen to my ideas. It’s his asset, so I expect him to tell me if he doesn’t like them.”

Rach says Trevor has a hands-off approach to staff management.

“Basically he leaves me to get on with it. It was a bit scary being dropped into the deep end from the start and I’m still learning as I go.”

She also has the backing of what she calls her ‘A-team’ – the three key staff members who help her run Te Moata – Laura Mantell-Harding, Patrick Spence and Debbie Sorensen.

Debbie is Rach’s Mum, who lives in Taranaki but works as a full-time casual on Te Moata.

Laura is a very capable shepherd with an excellent team of dogs, and Patrick, who was

“If something’s broken in the morning, it will be fixed by the end of the day.”

Rach says she’s been lucky to be able to draw on the advice and vast experience of the other Paparata managers, who are all long-timers. Digby Brice has managed Paparata for 15 years, John Manning has run Tokirima for over 30 years, and Heao manager Seymour Spence has been with the business for more than 25.

Trevor, who lives in Hamilton, believes his inclusive approach to management is a factor behind the longevity of his team.

“I’m lucky to have very capable managers, so I see my job as providing support rather than supervision.”

Most of the Paparata group’s managers started as shepherds.

“It gives me a lot of satisfaction to see people working happily on the farms. My philosophy has always been ‘If you look after me, I’ll look after you’.”

He says it is important staff have a good work and home environment. Farm houses are comfortable and well insulated, “and we try to ensure the farms have good infrastructure so our managers can do their jobs properly”.

Trevor says the scale of the Paparata operation has provided the opportunity for staff to progress into management positions.

And he hasn’t ruled out further expansion.

“I’d certainly consider adding more land if it complements what we’ve already got and gives someone the chance to step up into farm management.”

While he’s still heavily involved in business planning and monitoring, he doesn’t do a lot of physical work on the farms these days, but he loves getting down to the King Country every week.

“I’m 74 and I realise I won’t be here forever. But I still really enjoy it and that’s why I continue to farm. It’s never really felt like a job for me.”