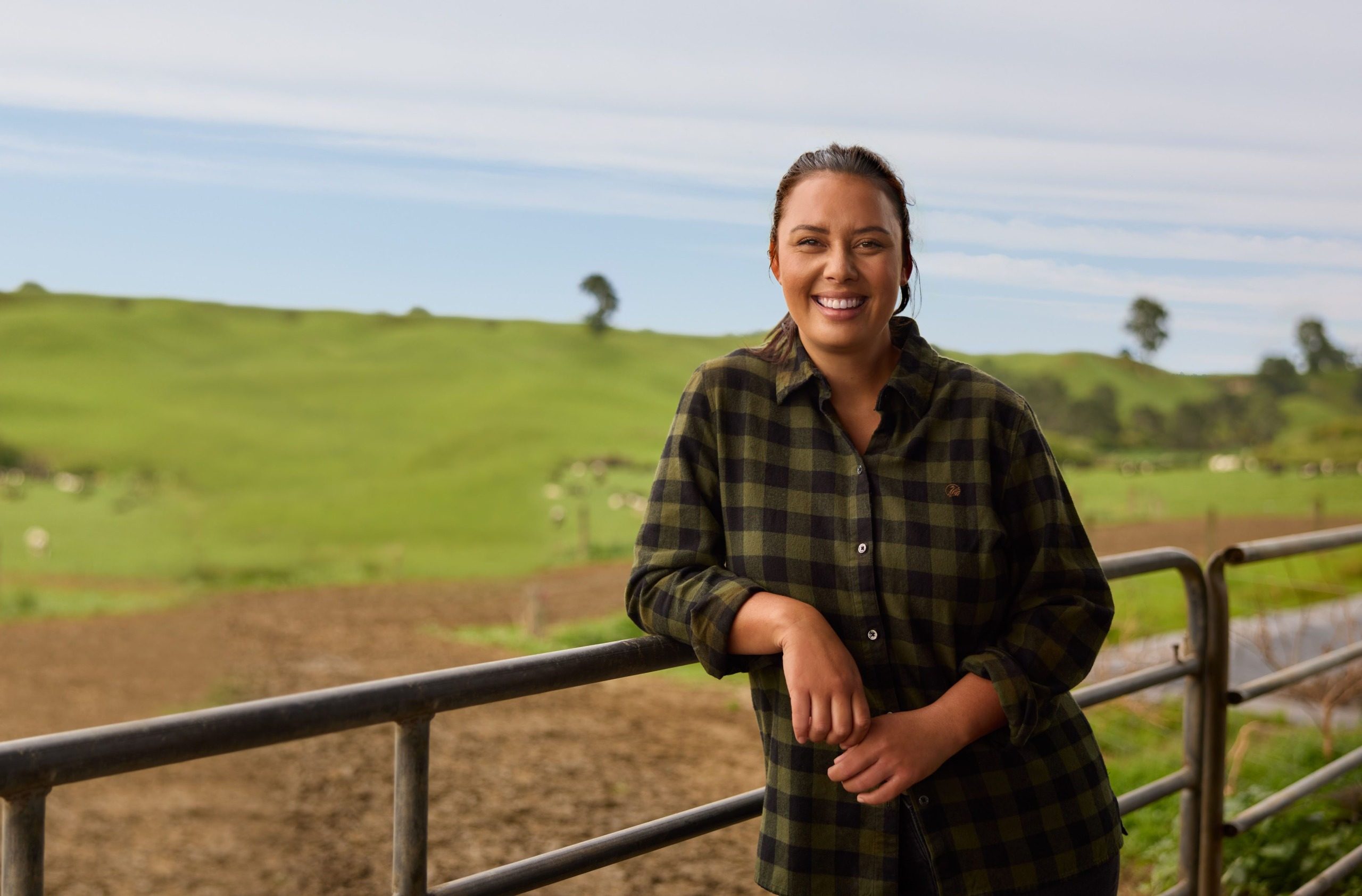 Shannon Munro made a series of TikTok posts during Covid lockdowns to keep her family and friends up to date with happenings on the farm – never realising they would launch her into a starring role in a national ad campaign to promote the industry she loves.

It was Dan Max, director of the advertisement who spotted Shannon on Tik Tok.

“The amazing head of casting for the DairyNZ ‘Join Us’ campaign Kate McGill contacted me asking if I would apply for the role. I thought it was a cool idea to promote dairying but said acting was not my cup of tea,” Shannon says, who with husband Steve and three children, farms at Waiohau in the Bay of Plenty.

Kate was persistent and eventually convinced Shannon to audition by sending in a video, based on some of the script from the advertisement.

“Steve got dragged round the farm filming and it was a lot of fun. However, I didn’t expect to get the role and was stoked when I did.”

Filming began in December last year on locations throughout the Waikato, including a bakery in Putaruru where Shannon was filmed walking out with a tray of cream buns, and cream on her nose.

“That was funny. It was filmed live with people in the street watching and people trying to get in and out of the shop next door.”

New to the world of acting, Shannon didn’t take long to find her groove. “I really enjoyed the experience and was so proud to have our son Sid involved too.” (That’s Sid working on a toy tractor in the workshop scene).

As a young Māori woman Shannon is also proud to be presenting a different face to dairy farming and to be associated with the campaign to show people what dairying has to offer as a career.

“Dairy farming offers really great opportunities and lifestyle. There are lots of opportunities for people to progress quickly and it’s very rewarding.”

She is also excited to help promote dairying as not only a career but also a lifestyle built around family.

“I was 100% delighted at the decision to feature a woman in the campaign as I think there are amazing women in the industry and their role needs to be highlighted.”

Shannon and Steve lease a 66-hectare farm about 30 minutes’ drive from Whakatane where they milk a herd of 180 Kiwicross cows.

“It’s a relatively small farm, small herd and a simple system which is good as finding balance between work and family time is really important to us.”

Their children, sons Benson (11), Sid (9) and daughter Kezie (4) love being on the farm, riding motorbikes and being hands-on. “They especially enjoy making huts in the bush and staying at the family’s glamping spot next to the creek.

“The kids can enjoy a lot of freedom on the farm. At the same time, they have lots to keep them busy and they’re learning life skills they may not have otherwise learned in the city,” she says.

Shannon grew up on a beef farm near the Kaipara Harbour in Northland and when she was 11, moved with her family to Tauranga. “Living in the city was a bit of a culture shock.”

She and Steve met when they were both attending Te Puke High School and Steve went on to become a builder.

“We had our first child, were renting and finding long commutes to work didn’t give us much time with him. When, 10 years ago, a family friend offered Steve a farm assistant’s role at Ngakuru near Rotorua we jumped at it.” Shannon, with son Benson by her side, helped with calving and calf rearing.

Six months later Shannon and Steve were offered a management role on the farm they now lease, but after three years, a drop in the milk pay-out forced the owners to take over running the farm again. That was followed by a move to a Galatea farm and then an offer of a 2IC role for Steve on a farm in the South Island where Shannon worked in a sales role with a rural company.

When a further opportunity arose to go contract milking, Steve and Shannon formed a company to take on the work, later moving to Northland. “We are always keen to take up new opportunities and when the chance came to lease this Waiohau farm, we leapt at it.”

Dairying can be hard work, but for Shannon it’s also fun and she and Steve plan to be working on the land and with cows well into the future – with farm ownership the ultimate goal.

Shannon’s bubbly personality shines through in the ad campaign, and she’s delighted that it has encouraged people outside the industry to consider dairying as a career.

“I know that through Covid many people have lost their jobs and thanks to the campaign, some are considering, or have already taken up roles in our industry.”

DairyNZ chief executive Dr Tim Mackle says DairyNZ’s ‘Join Us’ campaign is part of a wider project – ‘Here for the Long Game’ - aiming to help communities understand what drives dairy farmers, and how they are working to provide a better future for their farms, the land, their families, their communities, and New Zealand.

“Dairy farmers are a core part of the economic, social, and environmental wellbeing of communities throughout New Zealand, and our wider ‘Here for the Long Game’ campaign is a platform for dairy farmers to share with other Kiwis who they are and what they do in a way that’s open and fun,” he says.

“Welcoming and supporting new farming talent is vital to the sector’s long game, so we’re excited to launch a new campaign encouraging young Kiwis to get into the dairy sector,” he adds.

The ‘Join Us’ campaign looks into daily life on a farm - from working with machinery and technology, to caring for animals and the land.

“It’s about showing young Kiwis that, for those keen to get stuck in, dairying offers a truly rewarding career and lifestyle. By joining us, you’re not only securing your own future, but becoming part of creating a better one for all New Zealanders.”