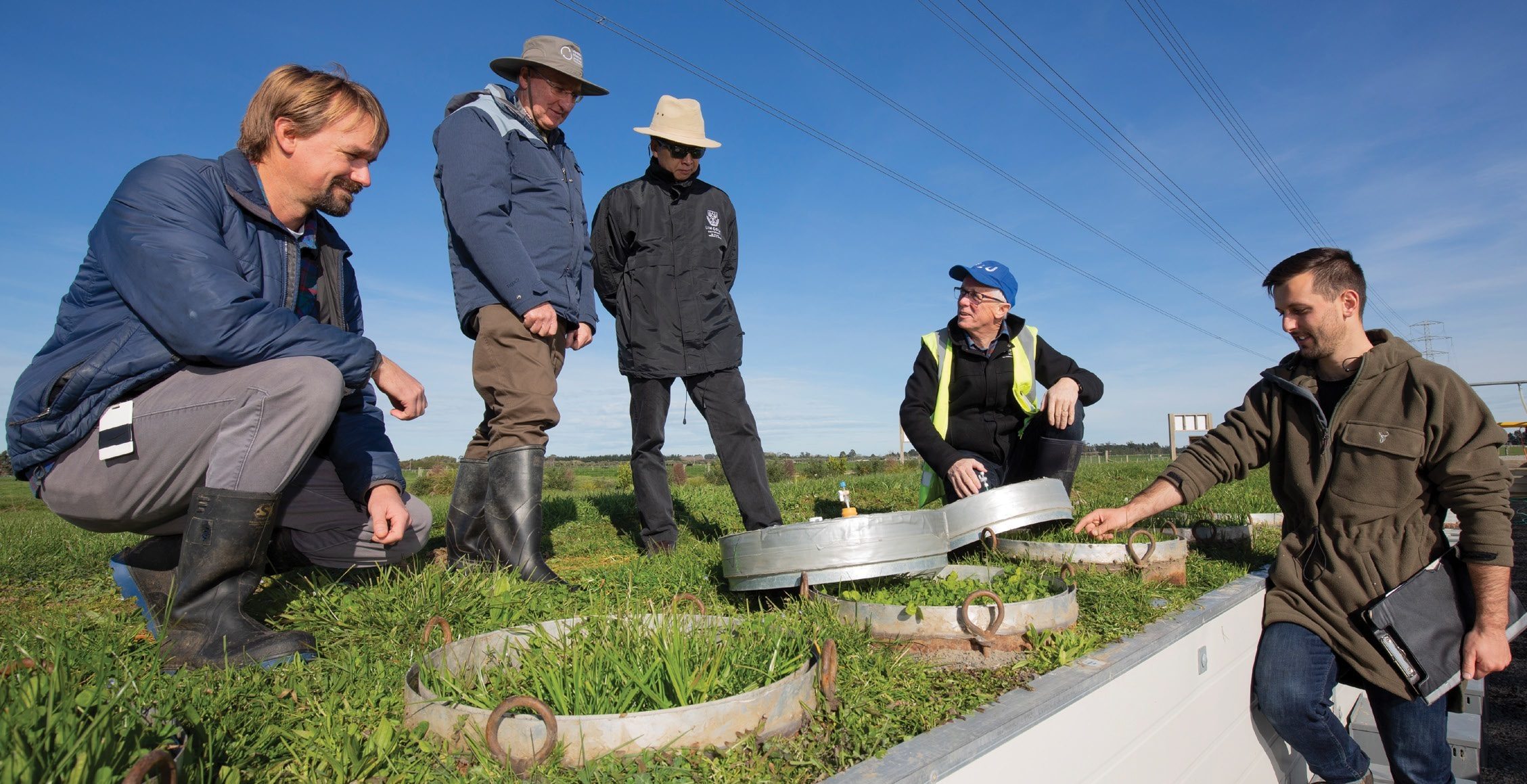 New research exploring the links between soil carbon and nitrogen leaching is showing up some exciting possibilities. Anne Lee visited the team of scientists exploring what’s happening in the soil, and what effect that has on inhibiting nitrogen.

odder beet may not only slash nitrogen levels in cow urine, the urine from cows fed fodder beet may also be acting as a natural nitrification inhibitor in the soil.

The ground-breaking discovery is just one of many hopeful findings already emerging three years into a five year, $8m study looking at ways to reduce nitrate losses from farms and the linkages between carbon and nitrogen.

The study, funded by the Ministry for Business, Innovation and Employment’s (MBIE) Endeavour Fund and carried out at Lincoln University’s Ashley Dene Research and Development Station has brought together scientists from a number of research organisations across multiple disciplines.

Manaaki Whenua – Landcare Research, Lincoln University and Plant & Food Research scientists have been working closely together on lysimeter studies – some at a huge scale – that also use state of the art gas collection facilities.

Manaaki Whenua – Landcare Research ecosystems and global change research leader Dr David Whitehead says the idea was that carbon and nitrogen processes in the soil are linked and if scientists could find ways to manipulate those interactions more nitrogen could be held in the soil longer.

In that way the various studies could potentially suggest new management techniques that may reduce nitrate leaching and nitrous gas emissions.

One of the first studies was carried out by Lincoln University PhD student William Talbot and looked to confirm the link between carbon and nitrogen in reducing nitrate leaching.

He used lysimeters to measure the actual levels of nitrate leached after carbon was added to ryegrass/white clover pasture and lucerne plots that also received standardised nitrogen applications via cow urine.

Replicates of each lysimeter study allowed the soil to be sampled too and DNA of micro-organisms to be analysed.

The carbon was added in the form of sucrose at 12t/ha and 24t/ha to the pasture plots and at 12t/ha to the lucerne.

William found nitrate leaching was cut by 75% and 91% respectively on the ryegrass/white clover plots and by 51% on the lucerne plots.

His soil analysis confirmed a reduction in the amount of soil mineral nitrogen with the extra carbon feeding the growth of microbial organisms in the soil that immobilise nitrogen.

The DNA analysis showed a reduction in the amount of ammonium-nitrogen in the soil lead to a big drop in the bacteria that feast on the ammonium – the ammonium oxidising bacteria (AOB).

They’re one of the major culprits when

it comes to nitrate leaching because they oxidise the ammonium to nitrate.

Lincoln University professor of soil science Keith Cameron says although it’s not a practical, viable option on farm to lift soil carbon levels, the experiment, using a sucrose solution, demonstrates the effect that altering the soil carbon to nitrogen ratio can have in reducing nitrate leaching losses.

Plant roots exude carbon and therefore some plants may be better at inducing immobilisation of N than others.

He says results from William’s further studies are not only confirming some practical solutions to reduce nitrate leaching, they’re showing there could be some new and exciting options on the horizon.

William explains that his lysimeter studies have confirmed nitrogen leaching losses following grazing of a winter-active pasture crop can be 65% lower than those from bare soil after grazing fodder beet. His research has also confirmed that feeding cows to lower their urinary nitrogen levels from 700kg N/ha to 500kg N/ha can cut losses by 36-38%.

What’s new is that urine from cows fed fodder beet could slash the rate of nitrate leaching by 65% even when the urine samples were standardised with urea to make sure they had the same nitrogen concentrations as urine from cows eating ryegrass and white clover pastures.

“One of the great things William has done here is look at the combination of plant and animal because there are effects of just the plants but there are also the effects of the animal eating different plants and changing the urine composition to identify more potential opportunities to reduce N losses.

“For example, once the cows have eaten their daily break of fodder beet, could they be moved on to ryegrass (especially Italian ryegrass) where their urine would cause less leaching?

“So that combination of the plant, animal urine and soil processes –it’s really complex and it’s keeping us all busy but it’s slowly emerging – how we can modify those different parts of the system so we can have the effect of reducing the losses,” David says.

More studies are underway to work out exactly what’s going on in the urine of cows fed fodder beet and in the soil with Lincoln University professor of soil science Hong Di overseeing research on the soil microbes and soil processes.

William’s research also measured gas emissions and found there was no significant change in nitrous oxide emissions from increasing carbon.

But another study at Ashley Dene carried out by Manaaki Whenua – Landcare Research scientist Dr Scott Graham is taking lysimeter and gas analysis to a whole new level with state of the art gas sensing equipment and huge 2m diameter by 1.7m deep lysimeters placed out in the paddocks.

The equipment is set up in lucerne paddocks – one dryland and one irrigated both with water and effluent from the farm’s dairy operation.

Three years’ worth of data on carbon and nitrogen losses is now giving results that have implications for best practice lucerne management.

The equipment samples the air at a very high speed measuring fluctuations that allow scientists to account for the carbon dioxide exchanging between the soil surface and the atmosphere.

“Because the bulk of the carbon dioxide is coming into the soil through photosynthesis and out in respiration we’re capturing the carbon gains and losses with a very small amount of additional carbon loss accounted for by our lysimeter system across the paddock,” Scott says.

They’ve found the irrigated lucerne, which is harvested not grazed, is losing carbon at a rate of 2-3t/ha/year over the three-year period.

As the crop grows through the year, carbon is accumulated but when its cut and taken away its lost. Added to that the crop isn’t active through the winter.

The news on nitrogen losses under the irrigated crop isn’t good either with actual measured nitrate losses at 147kg N/ha for the 2017-18 season.

But the news isn’t all bad. Soils under the dryland lucerne crop were also losing carbon when the crop was cut but when it was grazed the cows were helping recycle it back into the soil and there was a net gain for that year.

Nitrogen losses were considerably lower too at 17kg N/ha on the dryland site.

The lucerne paddocks are soon to be re-sown in diverse pasture species which will include plantain and further studies will give more information on what’s happening with soil carbon under more typical dairy pastures.

But it’s clear already that farm systems that build soil carbon are likely to have the added benefit of reducing nitrate leaching with the potential that manipulation of systems using crops such as fodder beet could hold exciting possibilities to practically help farmers reach fast looming nutrient loss restrictions.