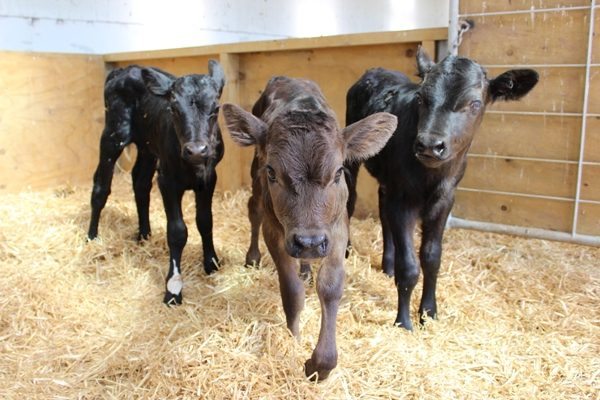 Each year, close to 3 million New Zealand dairy calves are slaughtered or euthanised onfarm. On top of this, somewhere around 1 million dairy cows are culled each year. Nicola Dennis poses a solution.

The “Zero Carbon Bill” has New Zealand agriculture aiming for some ambitious greenhouse gas reduction goals. The biogenic methane targets are going to be tricky to hit; a 10% reduction in 10 years and “somewhere” between a 24% and a 47% reduction within 30 years.

Basically, methane is a side effect of feeding plant matter to ruminants. The cellulose in the plant cell walls is
digested by methane-producing bacteria (methanogens) and methane is burped out the mouth (although, often falsely credited to the other end of the animal).

There are three ways to reduce livestock methane emissions:

1) reduce the number of ruminants,

2) reduce the amount of pasture fed to those ruminants, and

Believe it or not, the Government have laid their bets on the third option. The promise of a methanogen vaccine (or some other inhibitor) seems central to deciding the biogenic methane targets.

Many industry commentators are also hoping genetic editing technologies will be taken off the blacklist. This would allow the high-energy ryegrass AgResearch has been testing overseas to enter the country.

I like all these options. They all sound like good, fun science, but how does one enforce these remedies? We want to make a real change not just to look like we are making a change. Lest we forget the threelegged dog of an animal tracking system that we have limping across our computer screens.

Will someone with a clipboard administer annual methane vaccines/ inhibitors to my sheep and cows? Or
my neighbour’s alpacas? Or will we have to quibble over pasture species, soil composition and livestock specs in computer models such as Overseer to prove we are doing our part?

I want to go out on a limb and discuss the unthinkable: reducing production. There I said it. It is so much easier to enforce/prove a reduction in livestock numbers than it is to wrestle with animals in the yard or in a consultant’s computer. But let me be specific because I want to sidestep the whole plant-a-pine-tree-and-repent scheme ripping the hearts out of our rural communities. I want to reduce the number of dairy cows, specifically the pregnant ones.

Significant investment goes into rearing a dairy cow until the point of milking. Money also walks out the door when it comes to breeding her and keeping her alive during each calving.

After burning through those resources, chances are the calf is discarded within the first week. Each year, close to 3 million NZ dairy calves are slaughtered or euthanised onfarm and, somewhere around 1 million dairy cows are culled each year (at an average age of 4.8 years old), predominantly because they fail to get in-calf.

Let’s make an honest attempt to remove these under-utilised calves from the picture. It is possible to produce milk from a cow that has never had a calf. “Calf-free” lactations have been around since the 1970s, but have been, more or less, lost to the sands of time.

It is still possible to find vets that know how to perform the procedure and one ofthe leading dairy-vets was kind enough to explain it to me. Basically, it involves a CIDR application of progesterone (the same stuff used to help get dairy cows cycling to create the calf we didn’t want) and injections of dexamethasone (an antiinflammatory
medication already used in dairy cattle) and of oestradiol (which was licensed for use in milking cows until
recent concerns about its use to boost milk production).

Once the cow is lactating, no further treatments are required. However, skilled Google operators will find some overseas methods that involve regular treatment of bovine somatotropin (BST) during lactation. This would not fly in NZ and would exclude our milk from major export markets.

Calf-free lactations have the potential to reduce methane and nitrous oxide emissions because dairy cows would last longer than five years (more lactations achieved to offset the two years of methane-heavy “heiferhood” growth) and also spend fewer winters “eating for two” as they gestate that calf that no one really wants.

Calf-free lactations would also reduce the slaughter of bobby calves, alleviate customers’ concerns about cow-calf separation and seriously reduce the onfarm costs associated with breeding, feeding and replacing dairy cattle.
It would also make it easier to plan the start of lactation to match pasture availability which could be very helpful in times of drought and perhaps reduce reliance on outside supplements such as palm kernel.

I have high hopes for this line of research, but it would be reticent of me not to point out a few issues.
First, milk production in calf-free lactations is lower than natural lactations, on average. In calf-free lactations, some cows produce at the same level, but some fail to lactate at all. There would be a lot of room for improvement in the procedure and the genetics of the cow, but at the moment calf-free lactations produce about 70% the amount of milk as “normal”. The reduction in input costs (in particular, lowering the heifer replacement rate) offsets the loss in revenue, but production is still something to keep in mind.

Secondly, the last time I looked no one in charge actually wanted to put the leg-work into developing calf-free lactations. While there is technically no issue with food safety (the medications in question are already used in dairy cows and as medications for humans), the strategic use of hormones is going to be a hard sell for an industry levy body that wants to be “hormone free”.

Right now, the dairy industry uses hormones in an ad-hoc fashion to help get cows reproducing and to repair the ones having a hard time after calving. DairyNZ (the chief organiser of dairy research) wants to reduce the industry’s reliance on hormones rather than increase it.

It is a noble goal and it is difficult to propose anything that would cast a shadow on it. But, I think we need to make sure we are holding up the green and natural image rather than having that image hold us up. If we want to stop the planet from becoming Hell on Earth (either because of the clipboards or because of the warming) then a good place to start is getting more mileage (and fewer calves) out of Kiwi dairy cows.