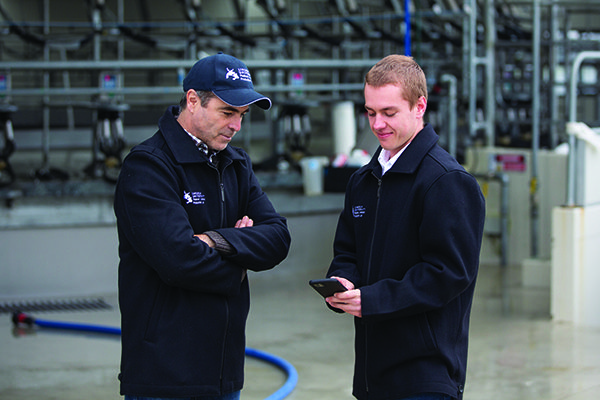 Latest research from Lincoln University and the Pastural Livestock Production Lab offers new hope to farmers in the search for tools to slash nitrate leaching, with cows themselves looking like a big part of the solution.

The work backs up what models from CRV Ambreed predicted when it launched its LowN Sires.

However, both Cameron and his supervisor, Lincoln University professor Pablo Gregorini, emphasise that this experiment is fully independent of the breeding company and funded solely by the university.

The reductions in urinary nitrogen are significant but the good news doesn’t stop there; Cameron’s work also showed an increase in milk protein percentage for the low MUNBV cows.

“The results show cows themselves could be an important tool in helping to cut nitrate leaching potential and in helping farmers meet regulatory reductions.

“To be able to do this and increase milk protein is a huge win:win.”

Cameron’s research was carried out at the university’s Ashley Dene Research and Development Station and involved 48 cows with MUNBVs ranging from -2 to +3.

He measured a comprehensive range of factors throughout the experiment that ran through the 2018-19 season.

Urine measurements were taken from the animals using Lincoln University designed PEETER sensors fitted to the back end of the cows to measure frequency and volume of urination.

Urine was also collected directly from the animals in early and late lactation as were dung samples.

That amounts to a 163g per day difference in the urinary urea nitrogen excretion between the animals with the highest MUNBV and those with the lowest BV for milk urea nitrogen.

“If you look at that from a per hectare basis and at a stocking rate of 4 cows/ha that’s 241.3kg/ha/year difference in the amount of urinary urea nitrogen going onto pasture,” Cameron says.

Using a model calculation developed by Lincoln University professors Keith Cameron and Hong Di, Cameron was able to determine the likely impact of that difference.

“It equated to a 40.73kg reduction in nitrate nitrogen leached per hectare,” he says.

The proportion of nitrogen partitioned into dung increased through late lactation - also good news for farmers because nitrogen in cow faeces is broken down and released more slowly and so is less of a nitrate leaching hazard.

That is crucial towards the end of lactation in autumn when the leaching risk of nitrates in the soil is greatest due to slower uptake by plants and greater chance of rainfall events that lead to drainage down through the soil profile.

Milk test data for cows at selected times through lactation showed that with every unit increase in MUNBV there was a 0.1% decrease in milk protein percentage.

“So cows with lower BVs for MUN had a greater percentage of milk protein,” Cameron says.

Milk fat levels were not significantly affected but total milk solids did increase as the MUNBV dropped and that’s what farmers are paid for so that’s an important benefit, Pablo says.

At the same level of DM and nitrogen intake the milk protein percentage was consistently higher in the lower MUNBV animals, so the grazing diet offered during the experiment was not behind the difference in milk protein levels.

Cameron’s analysis showed that the cows’ diet wasn’t behind the differences in milk urea nitrogen levels or in urinary urea nitrogen concentration either.

The PEETER urine measurement data showed no differences in frequency or volume of urinations, so that too could be ruled out as causing changes in urinary urea nitrogen concentrations.

His experiment also included sampling rumen fluids so that investigations could be carried out into what might be going on during digestion and whether differences there could be behind lower MUN and urinary urea nitrogen levels.

There were no differences in the concentrations of rumen volatile fatty acids or rumen ammonia but Cameron says more work needs to be done on how nitrogen is metabolised once it leaves the rumen, particularly when it comes to synthesis of glutamine – an amino acid that is a precursor for milk protein.

“We need to look at whether some of the processes there are being upregulated,” he says.

He is also looking into cow behavioural differences he noted during the study.

“There was only about 21% plantain in the more diverse pasture and we didn’t find any pasture effect on MUN or urinary urea nitrogen levels.
“But previous research has shown that plantain needs to be at 30% or more to get an effect,” he says.

“These are exciting results for farmers and Cameron is continuing to look into the data and identify where further research should be directed, but at this point we’re confident in saying the MUNBV is looking like an important potential tool in lowering nitrate leaching,” Pablo says. 