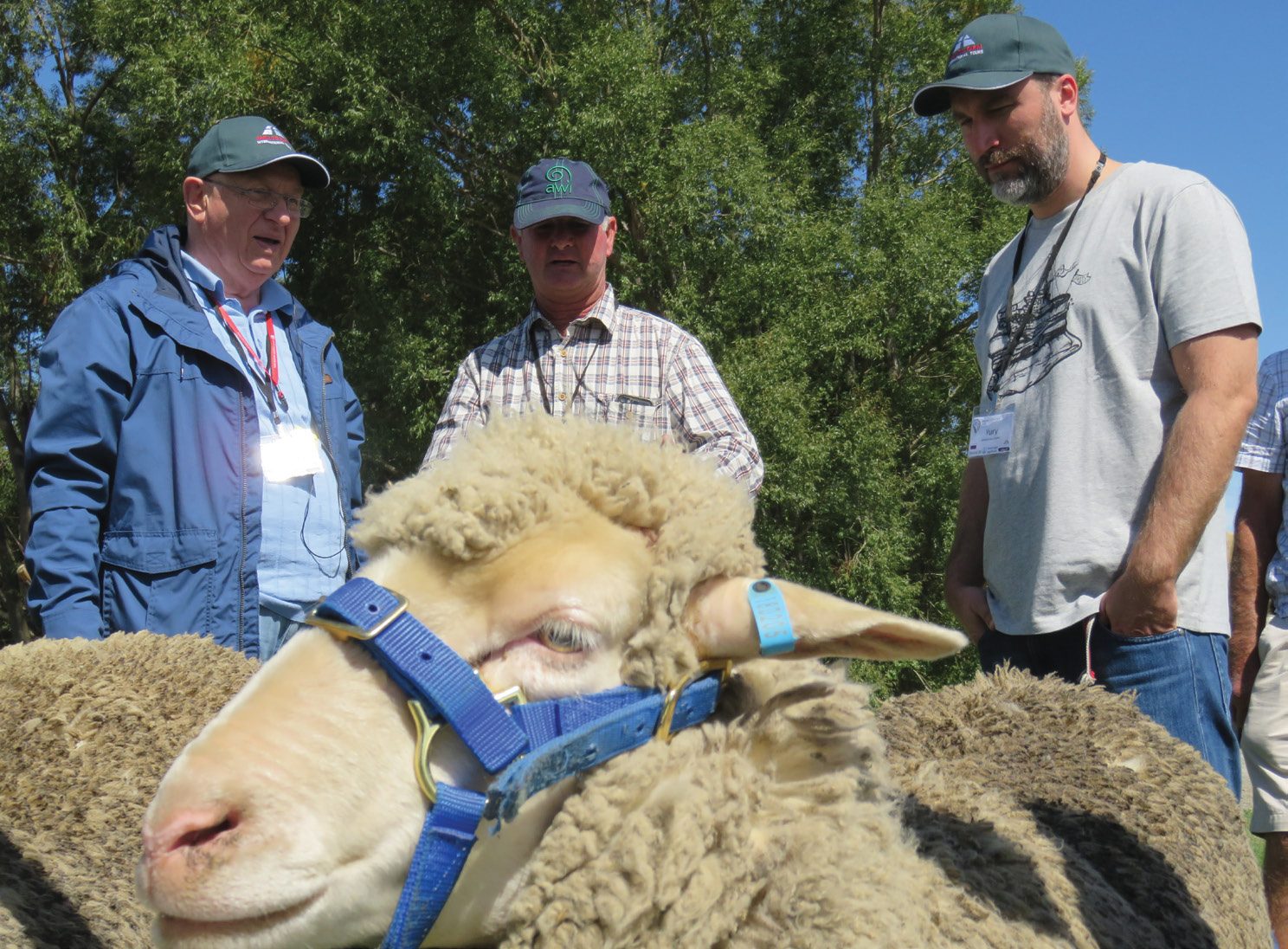 The composition of the New Zealand Merino was discussed at length last month, during the Merino Excellence 2020 tour.

More than 30 Merino stud farmers and those involved in the wider industry from Argentina, Russia, Kazakhstan, and Australia gathered to visit some of best of the Merino offerings in some special pockets of the South Island.

They started in North Canterbury, headed north to Marlborough’s Awatere Valley, across to the West Coast for some sightseeing, then spent a few days in Central Otago to attend the Merino Excellence 2020 Congress in Cromwell on March 12. It was all finished off with a visit to Wanaka A&P Show.

The Stevenson family is at the helm of this 920-hectare property, NZ’s oldest currently operating Merino stud, first formed in 1903.

The 19-micron fleeces from their sheep are pegged for Icebreaker, while the wools from their quarter-bred and half-bred flocks target Smart Wool contracts.

“We focus on fertile and productive sheep,” Mark said, who runs The Gums with his father Ian.

The focus is to breed sheep that position commercial clients to profit.

“It’s about breeding uncomplicated sheep that can handle any environment, while breeding for resistance to animal health challenges.”

Further up the road in Marlborough’s Awatere Valley, these global Merino visitors were in for another treat visiting three iconic Merino stud properties in one day and getting the chance to chat to a number of producers.

Manuel Camus from the Chubut province of Argentina has been managing a 45,000ha property with 20,000 Merinos for nearly four decades, and has during the years bought rams from the Awatere’s Blairich Station.

“I like the wool; it’s brilliant and white, soft, well-nourished and good weight.”

Ron and Sue Small have farmed the 3100ha Blairich for 20 years, where they have their Merino stud.

Ron, president of the New Zealand Stud Merino Breeders Society, says Merino farming is in a positive place at the moment, especially with the fine wool prices and the integrity of the industry thanks to initiatives like the Ethical Wool Brand ZQ driven by The New Zealand Merino Company.

A handful of farmers from the Awatere Valley gathered at Blairich Station with their own progeny for the tour group to see.

Ron had a great time on this tour in 2018 in Uruguay and was thrilled to see them on his turf.

“There is an element of looking at sheep, but equal to that is visiting special places and learning about rural culture. Often we learn as much about the culture as the sheep.”

Sally and Eric Smith of Awapiri Station know they are in a special industry with Merinos, and the wider focus for all breeders and farmers must be to keep moving forward.

Bill Stevenson of Upcot Station said the Awatere Valley is great Merino country. His family has been farming the 13,500ha property since 1902, and the stud was founded in 1944.

“You sort of grow a few roots,” he smiled.

Bill agreed with his neighbours that Merino wool is in a good place and having 10-year contracts with companies such as Icebreaker certainly adds stability.

Bill will get seven, perhaps eight years out of his sheep for their fleeces therefore wool is his focus, where he aims for around 19 microns.

But he does acknowledge the meat side of things is important.

“The carcases have got to be good too,” he said.

Blair Davies, Area Manager for Marlborough for The New Zealand Merino Company, was also in the valley for the day.

He enjoys the relationship he has with all the farmers, particularly helping them understand the value add of NZM’s ethical wool brand ZQ and NZM’s Branded contracts.

There was some representation from the Russian Merino industry, which is seeing a decline in the breed. There are currently between 13 and 14 million Merinos there, but export numbers have dropped recently with the loss of the Chinese market.

This Merino breed was created in 1935, using rams from Australia and Germany, and ewes from Russia.

Magomed said there’s no such thing as ‘owning’ farms in Russia. Instead, all farms are leased, his on a 49-year lease.

“Our sheep must be resilient,” he said, adding that each spring the sheep are walked for three months, covering 300 kilometres and reaching 3000 metres above sea level, to graze the summer ground. He was impressed with the wool the NZ Merinos have, good at keeping out dust and rain.

“We want to focus on good genetics,” he said.

From nearby Kazakhstan, Merino breeder Kakharman Kuder farms in the Almata, 15km from China’s border. He’s at 2000m above sea level, where temperatures can range from minus 35C, to 35C.

Kakharman’s 14,000ha farm which he and his brother are involved in, produces ‘Arhar Merino,’ a cross between a wild sheep and a Merino.

During Soviet days they would export to 14 countries. Nowadays, exporting has ground to a halt, but he’d like to see it start again.

The day up the Awatere Valley began up at Muller Station, on which the stud began in 2005.

Owners Steve and Mary Satterthwaite spoke to those gathered at the homestead about the importance of breeding quality Merinos, through single-trait selection.

“The phenotype is very important, but what you can’t see is as well,” Steve said, emphasising the need to keep the quality wool side of the industry, but also keep improving the muscle and fat components.

The easycare factor of a high country sheep, with good feet, is equally as vital.

“Foot rot is one of the biggest impediments for Merinos in New Zealand. If resilience can be improved, this will great for potential expansion of the breed.”

Steve said Merino breeding is improving all the time.

Chris and Tracey Thomson were on the tour from Strathbogie, north east Victoria in Australia.

With 40 years in the Merino industry, Chris agreed with Steve about the importance of genetic selection, as the demand for quality fine wool in places like Europe is getting bigger and bigger.

He said having access to well-bred rams, whose breeders also have a strong focus on genetic improvement, is a key part of this.

“We buy off Wurrook, which has bloodlines going back 100 years and they’re always looking for improvements.

“The supply and demand for super-fine wool has gone more to a demand thing because of the sports products,” he said. He is familiar with the Italian wool industry which he supplies.

The middle section of the day up the Awatere Valley was spent at Middlehurst Station, owned by Willie and Susan Macdonald.

Willie spoke of the genetic shift they have had in the last couple of years, due to the Central Progeny Test driven by NZM and Dr Mark Ferguson.

“We had a change from large frames lacking carcase, we needed to change this.”

vamtam-theme-circle-post
 Category Subscriber - Country Wide
Ben Allott principle that I have really taken away from my involvement in the RMPP...
 Tags Animal Health
Read More

Family does the basics wellLamb for the world’s diners