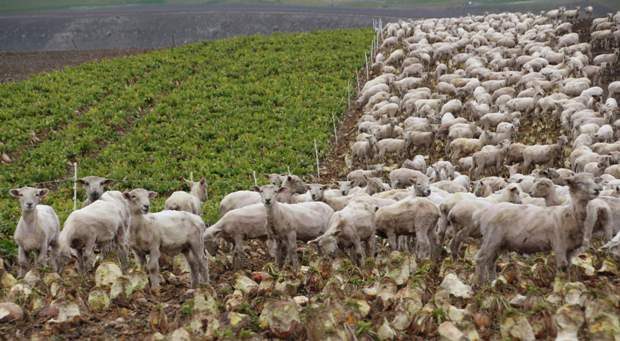 Fodder beet is commonly used to fill pasture shortages in the winter. The high yielding crop (up to 30t DM/ha) is a cost-effective form of feed with high metabolisable energy. However, because of low crude protein, fibre, calcium and phosphorus, it’s nutritionally imbalanced as a sole diet. Other fodder crops have similar attributes. Because of their increasing popularity, various pieces of research are under way to look at the effects on many aspects of ewes and lambs from feeding these winter crops.

A 2016 fodder beet grazing AgResearch trial on twin bearing ewes found that grazing fodder beet (plus ad lib ryegrass hay) was unable to meet the ewes’ requirements from mid-pregnancy to lambing, making it an unsuitable feed to feed on its own. Those twin-bearing ewes grazed on fodder beet had lower liveweight weight gains, lower body condition scores compared to ewes grazing pasture, and gave birth to lambs that had lower birth weights, higher mortality rates and slower growth to weaning.

Following on from the 2016 trial, AgResearch has looked into the effects of a fodder beet-dominant or forage-based (lucerne chaff) control diet on triplet-bearing ewes. This research was presented at the New Zealand Society of Animal Production conference in July 2019.

Triplet-bearing ewes have a 50% greater feed requirement than ewes with singles. Their protein and metabolisable energy requirements are greatest in the last six-weeks of gestation as the lamb gains up to 75% of its birthweight in those weeks, making it a key time for good nutrition. The objective of this study was to determine the effect of a fodder beet-based diet (fodder beet diet) on triplet-bearing ewe dry matter intake, liveweight, body condition score and lamb birth weight compared to a lucerne-based diet (control group) when both diets are balanced for crude protein and minerals.

The study, done at AgResearch Grasslands in Palmerston North, hypothesised that supplementation of a fodder beet-based diet to meet the crude protein and mineral requirements of triplet-bearing ewes in mid to late gestation would support similar fetal growth and maintain ewe condition compared to a nutritionally balanced lucerne-based diet.

The key findings were:

The conclusion was that a chopped fodder beet diet with additional crude protein and vitamin supplementation was able to support ewe liveweight and body condition score in late gestational triplet-bearing ewes housed indoors and supported greater birthweight in female lambs.

Ewe body condition and lamb survival and growth to weaning is under evaluation by the AgResearch team led by Dr Sue McCoard. This research team is also looking into the impact of the diets on immune function in the ewes and progeny as well as understanding the physiological mechanisms underpinning the production responses. Collectively, this information will help to inform supplementation strategies and/or improved feeding management practices to improve animal health, wellbeing and production efficiency.