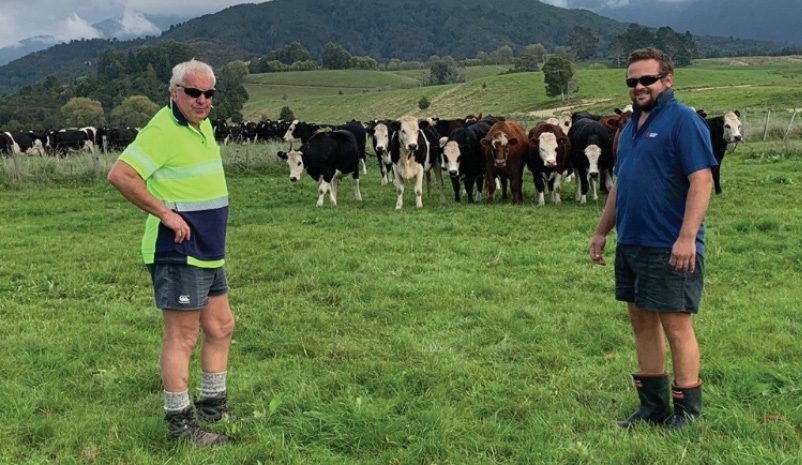 Nathan Page and his family milk 1400 dairy cows in Golden Bay and only the Jersey-cross calves from heifers go on the bobby truck. Friesian bull calves are reared and sold at weaning, all heifer Hereford-cross progeny are sold as feeder calves, while most of the Hereford-cross bull calves are finished as two-year-old steers.

To add another income stream, they buy in up to 70 Jersey bull calves that will be sold later as rising two- year-olds to dairy farmers.

The Page family has expanded its farming operation near Takaka from the same land Nathan’s forefathers carved out of the bush from 1852. At one stage in those early years, a small acreage of hops was grown for the country’s fledgling beer industry. Little by little over the decades, more bush was cleared and eventually the poor, pakihi soils were developed into productive dairy country.

‘When dairy is down, usually beef is pretty good and props it up a little bit. And it makes sense for the Motueka farm to provide income rather than be just dairy support.’

Neighbouring farms have been incorporated into the farming business over the years and today the family runs a milking platform of 580 hectares. Alongside the Golden Bay dairy units, a further 80ha is used as a beef and cropping unit, while over the Takaka Hill near Motueka is 650ha used for dairy support and beef. About 250ha of the latter is leased land, while in Golden Bay the beef block is on a two-year lease-to-buy contract.

Only 60 minutes by road separates the Golden Bay dairy farms from the Motueka farm – double that for a truck and trailer load of cattle – but they are distinctly different climates and country. In Golden Bay, the rain is measured in metres and each year the farms get a decent drenching between 2.5m and 2.7m. Whereas on the Motueka farm it’s a mere 1.2m and the Moutere clay hills dry out in typically drought-prone Nelson style.

Nathan is operations manager and lives on the Golden Bay dairy farm with his wife Emma and three young children who are the seventh generation on the farm. His father, Brent, is still very much involved in the farming operation even though he has moved off the farm with his wife, Kathy.

For the past 14 years they have been keeping an increasing number of calves, partly to make use of the land they had near Motueka and because financially it’s worth the equivalent of $1kg milksolids (MS) to their income – the dairy farms produce about 560,000kg MS each season. It also simply made sense to raise those calves rather than put them on the bobby truck for their minimal returns.

Covid-19 has shown how quickly everything can change in the world and Nathan says the range of beef options in their operation gives them diversity to help ride out downturns. When one income stream is down, the other can often fare better. In the past, when the milk payout fell to $3.90/kg MS, it was the stock sales that provided vital cashflow for the business.

“When dairy is down, usually beef is pretty good and props it up a little bit. And it makes sense for the Motueka farm to provide income rather than be just dairy support.”

The milking herd is made up of big Friesian cows, though Nathan began breeding toward a smaller-framed cow this year to achieve a good mix of litreage and milkfat. At mating, the herd is artificially inseminated (AI) for four weeks to produce replacement heifer calves and that also produces about 120 Friesian bull calves which are reared to weaning at 100kg. For the past few years they have been sold to the same buyer in the North Island at market rate and last year those bull calves fetched between $500 and $550 each.

All of the calves born on the dairy farms are given colostrum for four days and then taken in their own truck over the hill to the Motueka farm where a small dairy is set up to milk 30 to 35 cows to feed these calves.

“They are all reared on full milk and it’s so easy. We milk the cows and chuck it in the feeder and the calves’ weight gains are good.”

A farm manager and farm assistant are employed full time on the Motueka farm and have the job of raising the beef calves and taking them through to two-year-olds.

After four weeks of AI on the dairy farm, Hereford bulls that are bought as yearlings from a Fox Glacier breeder, Wayne Williams, are run with the herd for six weeks to produce the beef-cross stock.

This year they bought 15 15-month Hereford bulls and Nathan says they have been ideal to produce calves with a low birthweight but fast weight gain and an essential good temperament.

The herd produces about 500 beef calves and they keep about 170 of the earlier bull calves for themselves, then sell the rest when they are four days old to the same local buyers who have bought them for a number of years. Last year the Hereford-cross heifer calves sold for $150 and similar bull calves between $180 and $200.

Those bull calves that are reared on the Motueka farm are run in groups of 40 while they are being fed cows’ milk and at weaning the 140 or so are split into two herds that will be taken through to prime beef as two year olds. It’s a simple grass system with a bit of hay and balage to keep them full through winter and maintain weight. Spring growth takes the steers to between 500 and 600kg liveweight, with the first ready to go to the works in November.

This past season they had 180 two-year-olds to finish and managed to get two loads of 40 away before Christmas for $6.20/kg, adding up to about $2000 per animal. Then the price plummeted, leaving them with 80 now R3 steers to farm on until the price lifts.

Running lower stock numbers gives them the flexibility to do that. Normally they would have all the two-year-old beefies gone before winter, but they have the feed to take those 80 remaining steers through winter if needed.

As a dairy support block the Motueka farm carries all the R1 and R2 dairy heifers as well as 100 carryover cows, plus winters between 300 and 350 cows. That means it carries 300 R1 heifers which get a bit of kale crop through winter, plus grass and hay. The 300 in-calf R2 heifers head back over the Takaka Hill at the end of July to calve on the dairy farms.

In Golden Bay, the lease-to-buy farm has part of it incorporated into the milking platform and the rest is for beef, with the stocking rate still low. They didn’t want to milk any more cows, so the beef side works well on it, while still having the flexibility for dairy support.

Between the properties in Golden Bay, the bulk of the dairy herd is wintered with the help of good June grass growth and about 13ha of swedes. This winter the Pages are budgeting on 20 tonnes/ha from the swede crop, but Nathan says it could be a 24t/ha crop.

One of their strengths as a business, Nathan says, is having the gear to spread fertiliser themselves as well as ground work and drilling, without having to queue for contractors. Golden Bay’s high-rainfall climate combined with areas of pakihi soil makes regular dressings of fertiliser essential and it is a big advantage to apply it themselves.

“It means we can get the fertiliser on when we want it and that’s a big thing for us, especially in spring. We can get it on a couple of days before the rain and get a good response from it. It’s money in the bank when you can do it like that.”

The only time they get contractors in, is for baling balage and hay or chopping pit silage, with all the grass supplements cut on farm for the stock. Carting their own stock is another strength, especially with properties on both sides of the Takaka Hill. These days they have two truck and trailer units that have been valuable assets since the threat of Mycoplasma bovis. Between calves, heifers, cows and supplements between farms, the units get good use and give them more flexibility to move stock around if they need to.