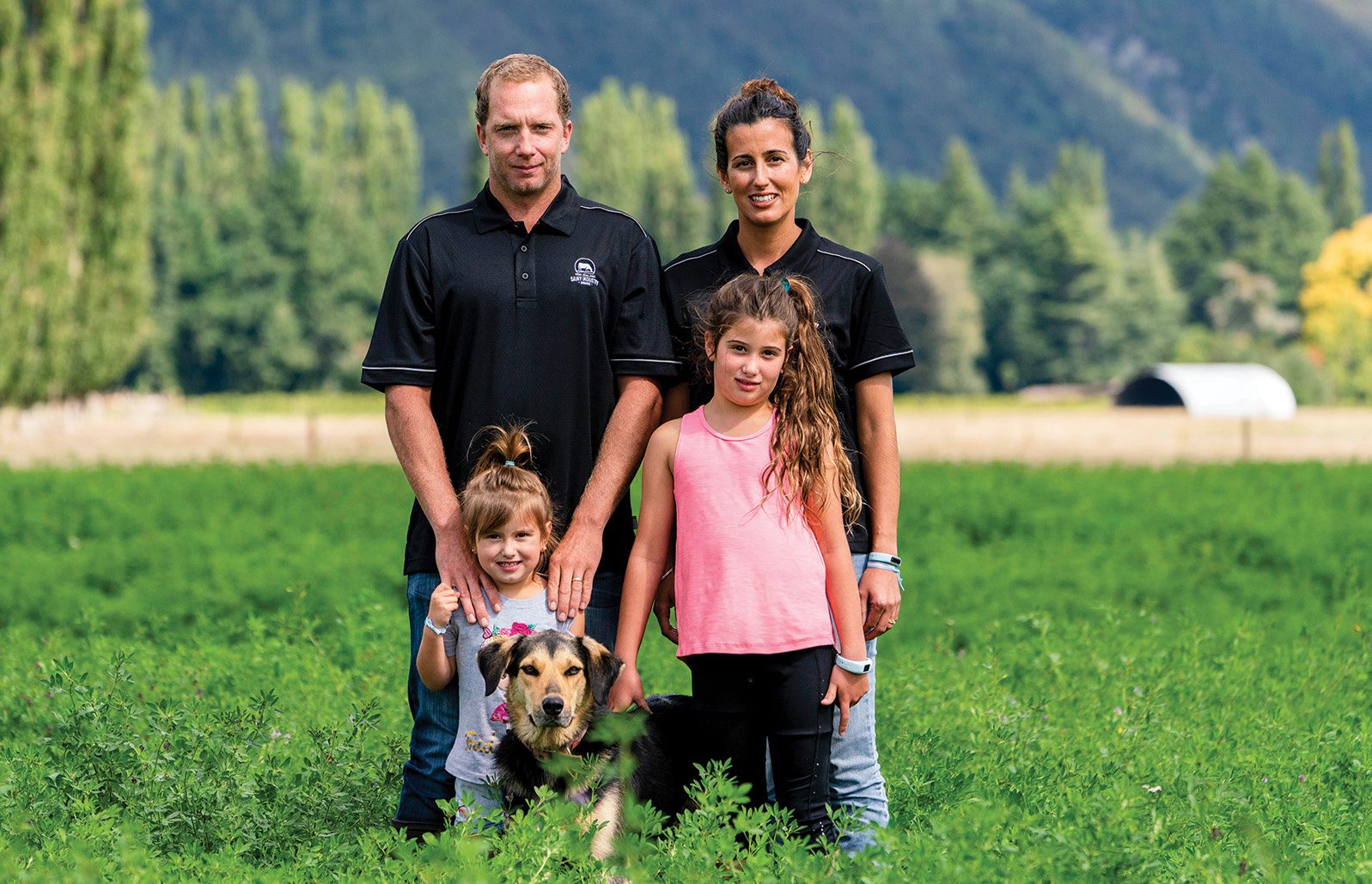 Argentinian Maria Barkla told the NZ Dairy Exporter she entered the Dairy Industry Awards for the glory. Her Kiwi husband Adam shook his head and tells her she can’t say that.

The 2020 Bay of Plenty Share Farmers of the Year are different, they come from two different cultures. But it’s their differences that make them a great team.

“I’m a stresser and a control freak, but Adam is a calm person.”

Adam’s Nana always told him ‘it’s easy to be a farmer, but to be a good farmer you need to manage stress well’.

His relaxed attitude is not great for doing a thorough detailed budget or stock records, however, whereas Maria is a stickler for detail and keeps them on track. 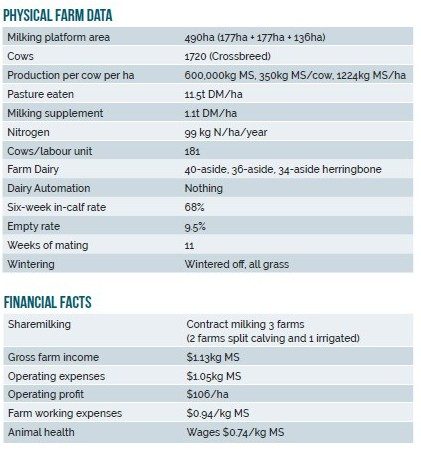 The couple are managing 1720 cows on three milking platforms in Galatea for Adam’s uncle and aunty, Robin and Claire Barkla.

The couple met in Auckland while Maria was in New Zealand on a working holiday visa and Adam was studying National Diploma in Civil Engineering. When they welcomed their first daughter, Olivia, just over a year later, they decided they wanted a rural upbringing for their children and moved back to the Bay of Plenty.

Adam got a job working for Robin and Claire’s contract milker and started studying PrimaryITO Level 4.

He moved up to 2IC and applied for a farm manager’s role and got offered three but his uncle Robin wanted him to stay on the family farm.

That’s when the couple stepped up to contract milking 450 cows in 2015. The following season Robin and Claire bought a neighbouring farm so their cow numbers went up to 1000, and a third farm in 2018 which brought cow numbers up to 1800.

“It was bloody hard going from 2IC to contract milking, we were learning it all as we went,” Adam says.

“We haven’t been gifted this opportunity or any money to get into it, we’ve had to work hard to get here.”

Being able to work for Robin and Claire has helped the couple think of the big picture, he says.

“They don’t think month to month or season to season. They tell us we’ve got to look five and 10 years out about where you want to be.”

The couple have made a longterm succession budget for the next 25 years to be able to buy into the farms by 2025 and to buy Robin and Claire out by 2040.

Their plan is based on an average payout in an average season. They are dabbling in stock and shares to build their equity along the way.

“You’ve got to have discipline to put away money in the good years,” Maria says.

Olivia starts high school in four years and the couple want to move to Robin’s other farm at Onepu, which is closer to the schools at Edgecumbe and Whakatane. They have two daughters, Olivia, 7 and Victoria, 4.

Maria is not hands-on in the farming operation, instead she is chief book keeper, doing all the financial work, health and safety, human resources including rosters, etc.

“My perception before I went farming was farmers are dumb. But I realised how much it takes to be a farmer, to understand the science, the financials – the amount of knowledge you need as a farmer is huge.”

They employ nine staff and Adam works onfarm to cover all annual leave. Otherwise his average day is managing the three operations which are DairyNZ System 4.

“One of our greatest strengths is our scale. It allows us to work on our business rather than in it,” he says.

“For a farmer who is milking 250 cows on their own, getting up at 4.30am every day, they can be too tired or stressed to think past their day-to-day job.”

They have a manager on one of the platforms and another manager runs the other two milking platforms.

“Our staff are everything to us. There is no way we could do everything we do without them,” Maria says.

They have learnt a huge amount about employing staff over the last five years including how to put good systems in place and achieve high staff retention.

“We aim for our staff to stay with us to progress. Our standard operating procedures are about keeping it short and clear. Time is money so you need to have it straight to the point.”

Farmers have to learn to trust their staff and that is sometimes allowing them to make mistakes so they can learn from them, Adam says.

“I don’t get angry with staff. If your staff are doing something wrong then 98% of the time it’s your fault. It’s something you haven’t taught them, or they are tired.”

They use a Facebook group to keep in contact with all staff, including rosters and ticking jobs off.

“We never assume anything. Everyone can see what each person is doing and see what’s going on. If you have good communication your staff will stay with you,” Maria says.

She also believes that if there is a problem, it is best to address it straight away before it festers.

“I am a straightforward person. I will ask you if something is wrong. I’m really open and I share what’s going on in my life with our staff so they are happy to share their life with us.”

Farmers employing staff need to think about what the stress points are for their employees, Maria says.

For example, if their bills go up $50 it might not seem a big deal to you, but it can be to them. They might stop eating and get sick.

The couple won six out of the eight merit awards at the regional finals evening, including the DairyNZ Human Resources Award, Federated Farmers Leadership Award and Honda Farm Safety, Health and Biosecurity Award, which confirms to them the work they put into treating their staff well and putting good procedures in place.

Because the couple threw themselves into the deep end going contract milking, they have been thankful of all the support in the community and the industry.

The help is there if you need it, you just have to ask for help, Maria says.

“We got WorkSafe out and asked them to assess our farm and point out anything we are doing wrong. That’s what they are there for.”

Westpac has also been fantastic at giving them financial advice to negotiate their contracts and put them on a plan for their future of farm ownership.

Adam and Maria first entered the Dairy Industry Awards four years ago when they started out contract milking.

“It was worth entering because it taught us to develop all of our systems and know the criteria, which helps you in your business,” Maria says.

They wanted to enter again this season to acknowledge how far they have come and to benchmark themselves against their peers.

When working for family, it can be hard to get credit because the normal job performance reviews might not occur. Having that independent feedback is beneficial, Maria says.

“It’s also good for our staff to see if we are doing a good job. It gives us more credibility as an employer,” she says.

Adam is passionate about changing people’s perception of dairy farming as a career.

“Farming should be up there with being a doctor or lawyer. You can make more money, there is no roof to where you can go with building assets and land.”

Part of winning the Dairy Industry Awards should be going around talking to schools about the career opportunities in dairy, he says.

Runner-up in the Bay of Plenty Share Farmer of the Year category was Dylan Riddell. Third place went to Nick Overdevest and Kelly Hughes.