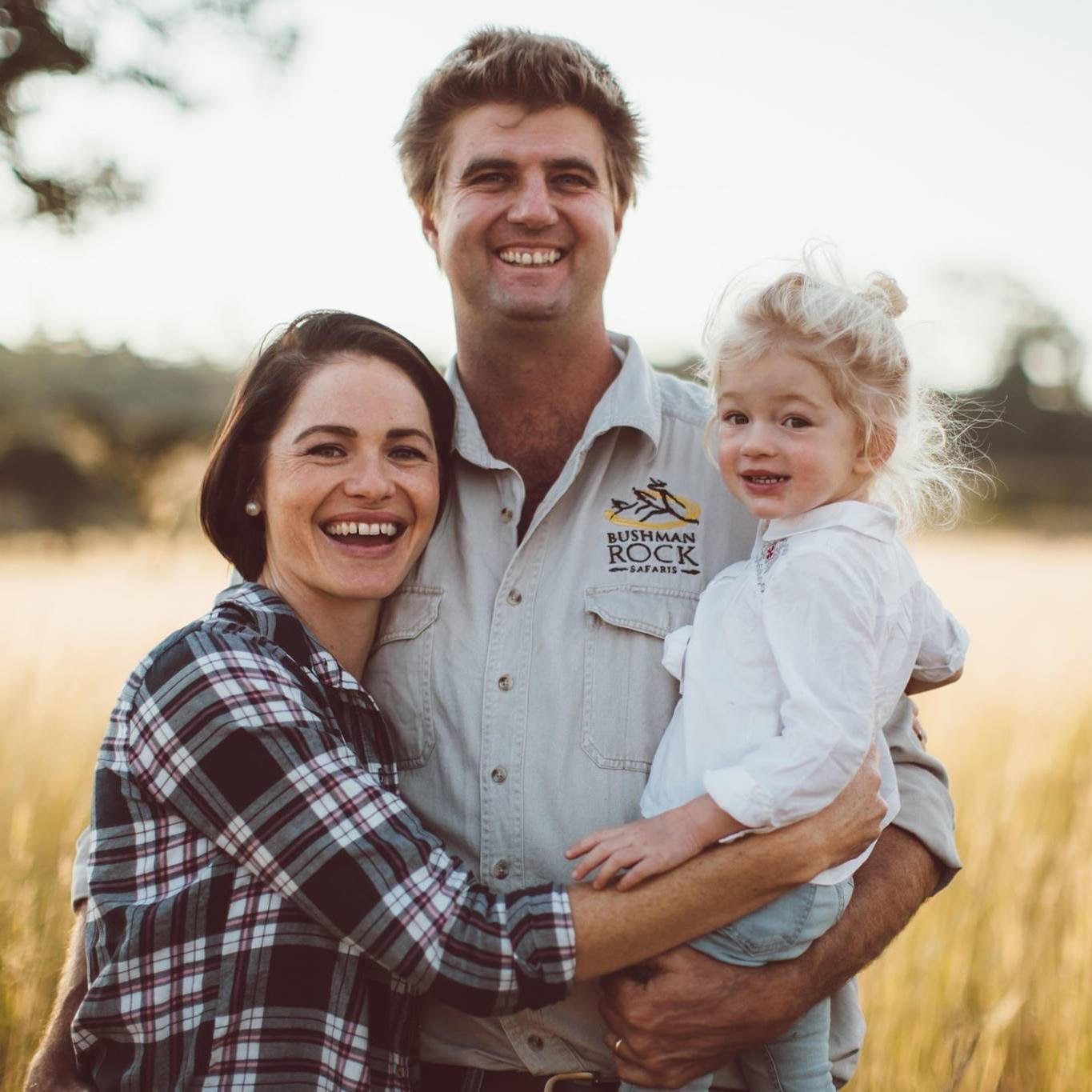 Jono and Justine Passaportis have wonderful memories of their Zimbabwean childhoods.

Today, the young couple walk up the long winding dusty road that leads through the gates to their family home of Bushman Rock Safaris, Zimbabwe, their four-year-old daughter Mila skipping between them, while one year-old Theo gazes from the comfort of his pram.

Behind them, the light is soft over the polo field and nearby game farm. In front of them the sun sets behind the hills and rock outcrops.

Bird song is fading, the insects of the night are picking up volume.

It’s been another busy day in the bush for the couple, who chose to return to their beloved homeland to create and raise a family.

They make no bones that life is tough and hours are long. Their future here is sometimes questioned, and tasks the first world take for granted like buying fuel and bread can be exhausting.

Family life could have easily happened abroad, where each of them had created a life after finishing school in Zimbabwe.

“I spent my teenage years exploring the hills with my yellow Labrador, working in the vineyards and camping with my mates in the forest,” Jono, 36, says, who chose the United Kingdom for his university education to ‘broaden his horizons,’ then went to Argentina for a year to experience a completely different culture and learn how companies exist when emerging from troubled economic periods. He returned to Bushman Rock, Mashonaland East, the place his family moved to during his teenage years, in 2007.

Justine, 34, whose family is from farming stock, emigrated during Zimbabwe’s land redistribution programme, and her interest in travel and larger ‘global interests’ saw her in Brazil for a year to gain experience in a foreign culture and to learn another language.

She went on to study International Relations in Australia, before returning to Zimbabwe in 2008 to work in the humanitarian field.

Perhaps it was the challenges that pulled them back, the wildness and the uncertainly, or the colours of the sky and land, the way the sun filters through the dust. Or the warmth and openness of the Zimbabwean people; the morning greetings which hold sincerity and genuine interest, the huge smiles.

“I am definitely a product of Africa… I missed the smell, the feel and the movement of being in Zimbabwe – I just missed home,” Jono said.

Their homeland has gone through a very interesting period over the past 20 years, and Jono admitted there were times when returning to Zimbabwe did seem pointless – particularly when the country was breaking all records for hyperinflation and it was difficult to see a future there.

“But when I decided that tourism was my career of choice, the decision to return was crystal clear – there really is no country like Zimbabwe from a tourism perspective.”

The turning point to ‘return home’ came for Jono as his time in Argentina was coming to an end, and it was a decision between returning to the UK to study at masters level in tourism, or return to Zimbabwe to put his studies into practice.

Teenage sweethearts, with their studies and a bit of global exploring behind them, and balancing upon a mutual agreement they were set for a future together, it was Jono who jumped on a plane and took off to Queensland to ask Justine if they should make Bushman Rock Safaris their home.

For Justine, it was not an immediate yes. She admitted Iife was good in Australia.

Then came the concept of having a family. And thus the memories of their own childhoods; the African playground gifted from Mother Nature with the abundance of colours, noises and smells.

Living in Zimbabwe requires continual adjustment – the economic climate dictating that one is constantly altering strategies. In Zimbabwe, entrepreneurial spirit is rewarded, for those who are willing to put in the hard graft, and take charge of their own destiny.

“Dynamic thinking and the ability to change is paramount to life in Zimbabwe. I have been back for more than 12 years now and think that the underlying strategy to life here is ‘realistic optimism.’”

Although, as the years have ticked by, and Jono has become more like his father Rick, he admits what he ‘loves about home’ has changed.

“My greatest love now is seeing my children grow up here.”

He agrees with his friends that the weather, the space, the ability to be outdoors, the safety that makes family life so great, are all pulling factors.

But for Jono and Justine, it’s something bigger.

“It’s seeing my children grow up completely surrounded by love. We have a workforce of more than 60 employees here on Bushman Rock, and my children are surrounded by a community who genuinely care for and protect them.”

Despite the challenges, Jono and Justine stand strongly by their claim that Zimbabwe is a great place to live and raise children, even if, admittedly, the economic situation does put a lot of people off.

“But it is a country that gives back what you put in… The future of our country is bright, sometimes it may be difficult to see. But there is an amazing future for those who are here on the ground and we live in eternal optimism that the amazing potential of our country will be realised – but it needs us to be here to realise it,” Jono said.

Work starts with a walk around as much of the operation as possible, checking the various work teams are organised for the day, machinery is in place and working and supervisory staff are capacitated to do their work.

It’s then across to the lodges to meet the guests at breakfast, chat and find out how their stay is going.

Time then for the office – check-in with the accountants, marketing team, chefs, function and accommodation teams. Check over social media reviews, responses etc.

Time to head outside again – go out to outlying areas of the farm to ensure wildlife is alright, security is in place etc. Check on development jobs (there is always something being built or developed, from new roads to dams, walking trails to zipslides).

Lunch is always back at the house with the children for Jono, and Justine will be there too if she’s not in Harare for her other projects and work commitments.

Then back to the office; emails, checking on bookings at the lodge.

The evening will be for riding polo ponies, checking in with the lodges.

Then an early night to bed.

Expansion of the wildlife operation by an additional 150ha, and plans for a micro-brewery, cheese factory and a five-star tented camp is also in the pipeline.

The underlying and very important goal: to preserve the spectacular brilliance of nature through the sustainable management of all areas within their control.

The stories are out there about Zimbabwe’s situation.

Since the Kiwi winemaker Annabelle Latz left the bush-surrounded haven of Bushman Rock in mid-March, she’s had regular correspondence with her friends there, learning how daily life is now unfolding. In the last few months petrol prices have soared and the currency is running at a gallop.

Diesel is scarce, and power cuts for up to 17 hours most days poses many challenges. Simple tasks like trips to the supermarket are described as ‘scary’ due to the uncertainty of the currency and the lack of supplies.

Despite all this, they still slap a smile on their faces and note that they are healthy, in a more fortunate position than many others in their country, and still find joy in the beautiful surroundings, weather, family and friends.

Justine and Jono Passaportis represent the new generation at the helm of Bushman Rock, and while Annabelle was there they shared tales of childhood memories and spoke of why they still adore their homeland, despite the many challenges.