Automation of livestock feeding, while requiring considerable capital investment, should need less labour and be a more efficient and more productive means of getting tucker down the throats of animals. But does automatic feeding stack up for calves? They can be fickle with slow drinkers and crookies.

Rearing young calves requires patience and empathy – attributes that women are often regarded as having more of than men but that machines are not renowned for.

If automatic calf feeding is a goer, what does a good system consist of? What will it do, and how well? And what’s available to dairy farmers and calf rearers?

Automatic calf feeders range from the basic to quite complex systems. The basic models provide mixed calf milk replacer (CMR) or milk on an ad-lib basis to a pen full of calves.

The most sophisticated systems have individual calf feed mix and ration programs, and monitor feeding and weight gain. And of course cost varies significantly, even between installations of the same system under different conditions.

A successful automated calf feeder will:

Save on labour by freeing up staff at a busy time and possibly avoid the need to employ casual staff.

Rear a more even line of better, quieter calves; and quicker. These are claims made by advocates including users, though may draw on comparisons with a manual system that was inefficient and problematic. Better means heavier and healthier; quieter because there is less bullying and speed drinking; and “quicker” means reaching weaning weights earlier. The key to this is that an allocated ration of milk is fed little and often so every calf has the chance to get its daily allocation. The quick drinkers do not get more than their fair share at the expense of the slow ones. It also reduces scouring.

Allow ration size, blend recipe, and feeding frequency to be programmed and changed with age, even on an individual calf basis.

And it can also monitor consumption, drinking rate, liveweight, and absenteeism with alerts to any problems, which often go undetected in a manual system until calves are really sick.

David Reid of Reid Systems said that the company had two calf sheds connected by WiFi to one controller.

“Fifteen single feeders in one shed, six in the other, with approximately 35 calves per feeder. Some pens had three feeders in them. The second shed had a viewing computer with a 24” monitor to show the status of the calves.

“At the peak of the season they would have had around 700 calves in the sheds. They were our early single stalls, which we have redesigned and made them a double unit. Both teats have their own pump so both can feed at the same time”.

A typical automated calf feeder will consist of five parts: 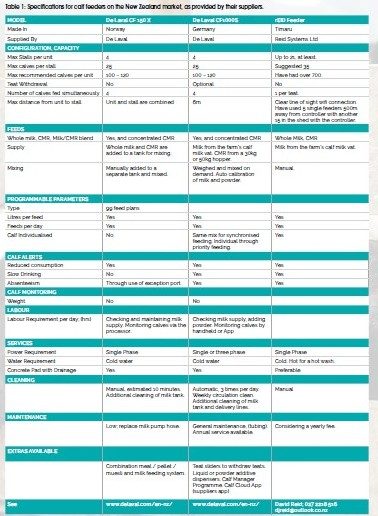 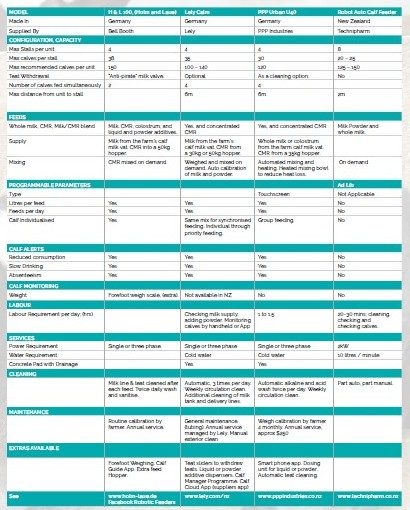