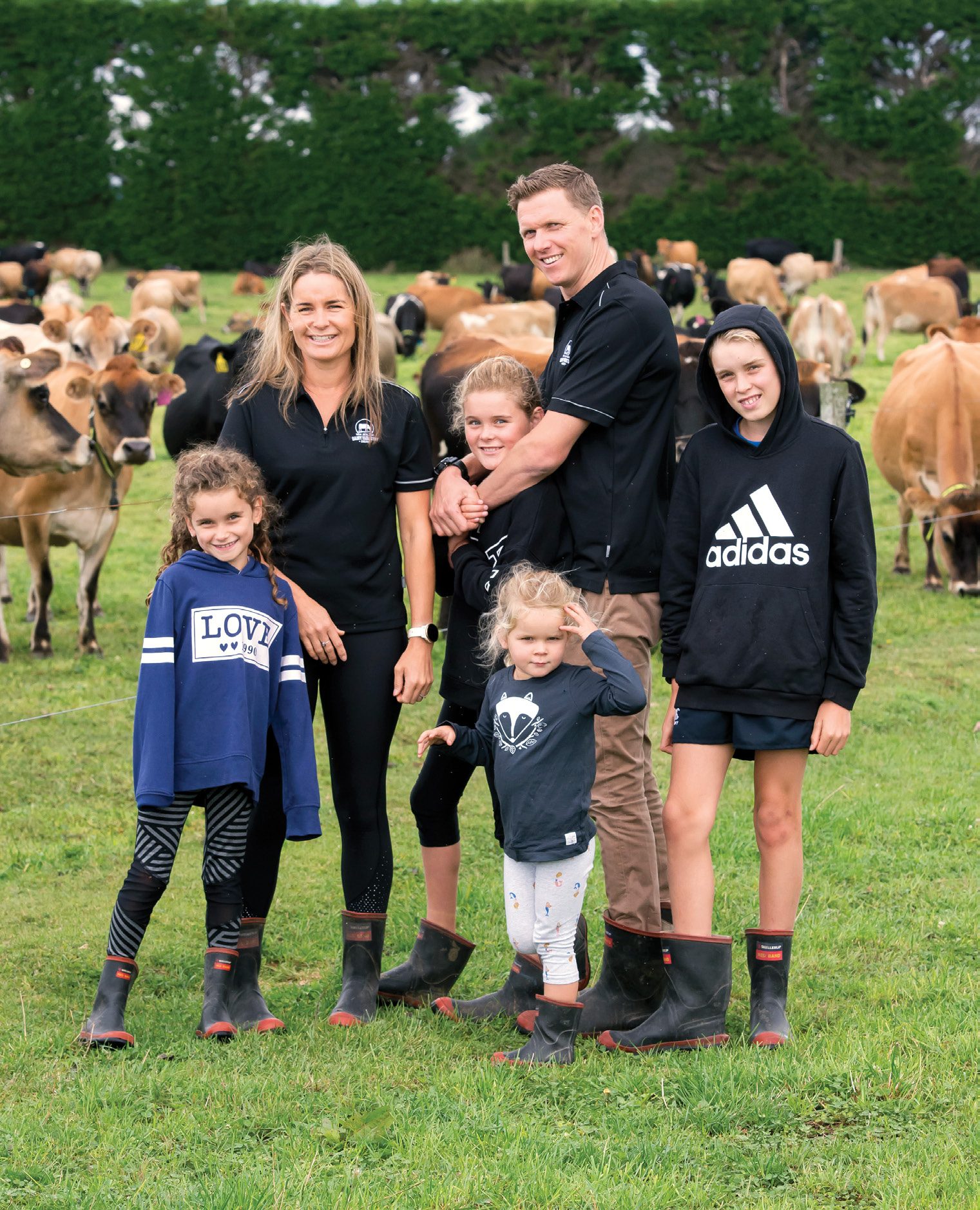 Central Plateau Share Farmers of the Year Todd and Renee Halliday credit a lot of their win to a meticulous attention to detail – a skill taught to them by a previous employer.

The couple worked seven years in Mid Canterbury for the Rylib Group, owned by John and Kelly Nicholls, first as farm managers, then equity partners while contract milking.

The Rylib Group has six farms in close proximity and the managers always met monthly to compare KPIs and budgets.

Every expense had to be justified and they had to complete a monthly variance report to the bank, with an explanation if there was any over-spending of the budget.

“We learnt how to reach KPIs and how to analyse every expense, from fuel to animal health.

“It was a high pressure environment, they expected results but they also gave us the freedom to balance family with farming,” Renee says.

“We attribute our successes to what we learnt while we were there, to have that extra attention to detail,” Renee says.

“John and Kelly empowered you to run the farm how you wanted as long as you got the results. I feel we were very lucky to be part of that,” Todd says.

Todd, a city boy from Auckland, decided to give dairy farming a crack because he couldn’t see a successful pathway in the hospitality industry. The couple were managing a boutique lodge in Rotorua together, but they couldn’t fathom how they could gain enough equity to own a $3 million lodge for themselves.

Renee’s parents own a dairy farm in Reporoa so he asked for a job and worked there for two years as a farm assistant.

During those two years he completed AgITO Level 2 through to Level 4 and placed third in the 2011 Central Plateau Dairy Trainee. 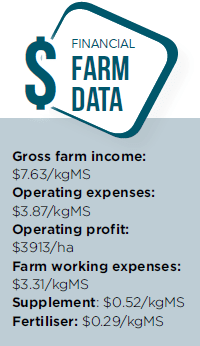 He then moved to manage a farm at Kaharoa for Chris Stevens and Chris Haworth for two years where he completed the PrimaryITO Level 5 Post Graduate Diploma and placed third in the 2013 Central Plateau Dairy Manager competition.

The couple then accepted an appealing offer to head down south to manage a 650-cow farm for Rylib Group.

The advert offered all the bells and whistles – good infrastructure, technology and opportunities for progression and equity growth. After two years managing they went 10% equity into an 850-cow farm with the Rylib Group, while also contract milking on the farm.

While they learnt key skills to run a meticulous operation, including running a team of staff, they also learnt how to be resilient farmers. Their first year as equity partners was the year the payout dropped to $3.90/kgMS which hit hard and they also suffered the heartbreaking loss of watching the farm’s youngstock, including in-calf R2s all be sent off for slaughter during the early days of the Mycoplasma bovis eradication, without even being tested.

“I had reared the calves, my children had calf club calves in there. It was horrible. We were lucky to have John and Kelly’s support to get through that,” Renee says.

“But that’s what makes us, the hard times. It sets you up to deal with challenges in the future.”

The opportunity to buy a farm with Renee’s parents, Phil and Diane Herdman, and move back to Reporoa to buy an environmentally sustainable and profitable farm was too good to pass up. Renee’s parents haven’t lent them any money and the couple were able to share up out of their equity partnership with enough money to buy 33.3% of the farm at Reporoa. The couple have always wanted to be able to stand alone and progress on their own so buying a separate entity and not working on the family farm was important to them.

They have an excellent working relationship with Phil and Diane. The new farm has been a massive system change from what Todd and Renee are used to, going from feeding 1.3 tonnes/cow down south to 330kg/cow in supplement.

They’ve also switched from milking big Friesian crossbreds to Jersey cows and have been overly surprised by how much they love the Jerseys.

The couple decided to buy the Jersey herd on the farm and topped it up with some more cows from a Jersey stud.

“We have been pleasantly surprised at what efficient feed converters they are. They eat less grass and produce more milksolids.”

After a very low cost and low input season last year, they have installed in-shed feeding and increased supplement this year to make the most of the high milk price. They will feed about 600kg/ cow supplement by the end of the season, still sitting within a DairyNZ System 2.

“We are up 10% for the district. Last year we actually had phenomenal grass growth which we haven’t had this summer, so we are only 1% up at the moment for the season, but aim to be 5% up by the end of the season,” Todd says.

“We want to keep the lowest cost structure we can, but not be too conservative either, especially when the price of milk is so good.”

Todd doesn’t have any preconceived ideas about what is right or wrong when it comes to farming because he didn’t grow up farming one way or another. He sees that as a strength.

“Everyone has different systems and ways of doing things, I think that’s what’s cool about farming. There are many ways to milk and feed cows.I love that farming every year is different, that’s the challenge,” he says.

They installed automatic cup removers in their first season onfarm and have leased Allflex collars and brought a drafting gate this year.

With the new technology they are hoping to make more use of options like sexed semen and short gestation beef semen to make better breeding decisions and solve the issue of small Jersey bulls – which struggle against the white face bulls and other beef breeds.

They’ve also invested in the new technology to benefit staff and keep that work/life balance, helping keep hours down and to improve wellbeing.

“The successes we have enjoyed are a direct result of the individuals around us – our people, we want to look after them,” Todd says.

When he started he was on a 24-on and 4-day off roster then an 18 and 3, which was reflective of what the industry and area were used to.

“Working in the South Island gave us a new perspective that you can have a life and be a good farmer.”

With the kids getting older, Renee has been able to dive more into the everyday running of the farm as well as the overseeing business eye.

“I’m more the animal lover, the practical one. I bring the heart, Todd’s strength is numbers and attention to detail. That’s why we make a great team.”

Keeping a close eye on finances and spending in good payout years is just as crucial as managing in a low payout, Todd says.

“We all know after the ups come the downs.”

The plan is to be 50% owners in the next two years and own the farm outright within the next 5-10 years. They plan on taking another sharemilking job to build the equity needed.

Todd’s biggest driver to enter the Dairy Industry Awards was to benchmark the farm against others in the region and to strategically analyse their business.

He missed the competition of regularly benchmarking against other farmers and striving to be the best and get the best results which he was used to in the Rylib Group. The couple also thought it was a good way to get to know more farmers and rural professionals in the area.

The couple were surprised to win all the merit awards on the awards night and want to acknowledge the other contestants who also put in so much work and time as part of the competition.

“We know the effort it takes that everyone would have put in.”

The three merit awards they really wanted to win were the LIC Animal Wellbeing, Recording and Productivity Award, the Ravensdown Pasture Performance Award and the Stretton & Co Business Performance Award.

Going through their goals for the competition and including their accountant and bank manager has also made them realise they could achieve their goal of outright farm ownership earlier than first thought.

“We expected to gain so much out of the competition, but we gained so much more,” Renee says.

The couple have every confidence they can absorb environmental regulations that will come and that their children can have a future dairy farming as well if they wish to.

“We don’t feel too scared or disheartened by that, we feel we can manage the things that come at us,” Todd says.

The key to successful contract milking

The key to going into any contract milking job is knowing the costs, so talk to the farm owner and make sure you are getting accurate cost information, Todd and Renee say.

With their contract milking positions they’ve worked out all the costs and potential incomes and ensured they factored in a surplus to service debt. They reviewed their contracts yearly, had a minimum clause for production and a bonus structure to ensure they captured some of the increased profit if the payout went up.