Joanna Grigg, farmer and journalist, whips up another submission to make to the Government. Although there are plenty of other jobs waiting, she suggests farmers find 20 minutes to lodge their opinion on proposed farm freshwater plans.

Find 15 minutes and submit to the Freshwater Farm Plan proposal before September 12.

Yes, that’s right. Another submission. Don’t lose motivation and turn away though. You must be getting good at them by now. Especially Canterbury and Otago farmers (I see your enthusiasm showing in Figure 1).

Just think, only 331 landowners submitted on the initial low slope stock exclusion map, and someone must have listened. A new mapping approach is proposed now so areas to be included have reduced from a 10 degree slope land to five degree average. High country streams at over 500m altitude don’t have to be fenced. That was always going to cause a stampede of highlanders given its lack of proven benefit to water quality at low stocking rates, and impracticalities of fencing braided streams. Most likely, agencies like Beef + Lamb NZ, Federated Farmers, Deer Industry NZ or councils helped get some pragmatism. But it could also have been concrete examples from farmers with good valid points. You can submit in round two on the map, to agree with the changes if you like, at https://consult.environment.govt.nz/freshwater/stock-exclusion-regulations/ 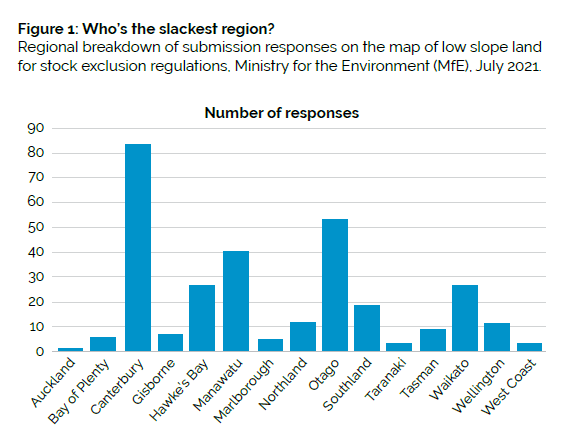 So, let’s have another go at getting more practical regulations before the ink dries on them. It’s the big beast again: the Essential Freshwater policy package. This time it’s Element 5.

The proposal on the table is for pastoral, arable or horticulture farmers (with over 20 hectares) to develop a mandatory freshwater farm plan for their waterways. This is on top of (or perhaps inside) a farm environmental plan (FEP). The Ministry for the Environment (MfE) estimates 75%, or up to 30,000 farmers and growers already have some kind of environment plan in place. The freshwater farm plan is about growing the farm environment plan and linking it to its water catchment, it states.

Plans are to be certified every three years, by an accredited certifier, or when a significant change is made to farm operations. Farmers will engage and pay auditors and, if it’s a fail, you get a revisit within a year. It’s proposed the infringements be enforced by councils.

The first step is farmers will need to create a decent map. Not on the back of an envelope showing where the duck pond is. The map will “identify features such as waterways, critical source (discharge of contaminant) areas, high erosion-prone areas and other risks to the health of the freshwater ecosystem.”

That’s pretty straight forward and should largely be in your FEP.

Where the water gets a bit murky is then creating a risk assessment for farm activities. This is for things like irrigation, application of nutrients and effluent, winter grazing, stock-holding areas, stock exclusion, offal pits and farm rubbish pits.

I’ve just been hearing about the real lack of research on how water travels through hill country soils and the hydraulics. A study is underway on irrigated hills near Timaru to look at this. Farmers may feel quite worried about proving to an auditor that fertiliser applications are fine and grazing strategies are not affecting ecosystem health. Risk assessment could be open to some loose interpretation by auditors. No one will want an auditor after a storm.

Two options are proposed for the risk/impact assessment, so pick the one you like. Option 1 is that the regulations state the minimum general requirements for a risk/impact assessment. This is more flexible and preferred by MfE. It is more suitable for incorporation into existing industry assurance programmes, they say, which would leverage the good work already occurring.

Under Option 2 the regulations would prescribe a specific methodology to undertake a risk/impact assessment. This would create more consistency among freshwater farm plans, but it would limit the ability to tailor the risk assessment. It would require significant change by existing farm environment planning services to meet the new requirement.

I’m leaning towards Option 1 at this stage. There is a softer and harder option for regulating outcomes. The softer one is proposed with less prescriptive rules (see page 22 if you want to jump to this bit). For example, to measure ecosystem health, the freshwater farm plan is developed and implemented in a way that reflects any relevant objectives for improving the health of the freshwater ecosystem identified by regional councils.

The more regulated option specifies particular things, like removal of barriers to fish, using practices to maintain habitat for species in water, providing shade over water and proactively improving wetlands. To me, this is quite detailed and doesn’t let the best options be chosen to improve specific farm landscape conditions.

The third step in the proposed freshwater plan is for farmers to write a ‘to-do’ list of what needs fixing, for example, what management of grazing or fertiliser needs changing. In consultant-speak, this is a schedule of actions to manage identified features and address identified risks.

This is where it could be expensive (for example, shifting sheep yards or creating sumps). How far away do stock yards need to be from waterways and can it be shown that there is a risk of sheep poo making it to the water? How many days in the yards per year is too many?

One good point to respond to is the proposal that if a farm has an approved freshwater plan, then farmers don’t need to go through the consent process with the intensive winter grazing in the Resource Management (National Environmental Standards for Freshwater) Regulations 2020 (Freshwater NES).

This ‘alternative pathway to some regulations’ as the discussion document puts it, could be appealing. Tell them if you like this.

A Zoom consultation in August, headed by Bryan Smith, MfE, called for farmer feedback. The idea is that freshwater farm plans will be phased in over time with roll-out prioritised in areas where waterways are less healthy (e.g., high nitrogen-impacted catchments).

It also sounds like MfE will put reducing greenhouse gases ahead of water improvements.

“Other obligations on farmers (e.g. commitments to reduce greenhouse gas emissions under He Waka Eke Noa) will also be taken into account when prioritising roll-out of freshwater farm plans.”

The 47 page document and link to make a submission is at https://environment.govt.nz/publications/freshwater-farm-plan-regulations-discussion-document/

If you just love this stuff you can also submit on the actual transition to Freshwater Plans and how they will be implemented, and designed through part 9A of the Resource Management Amendment Act 2020. See https://environment.govt.nz/publications/freshwater-farm-plan-regulations-summary/

Good luck, and come on Taranaki and Gisborne farmers!