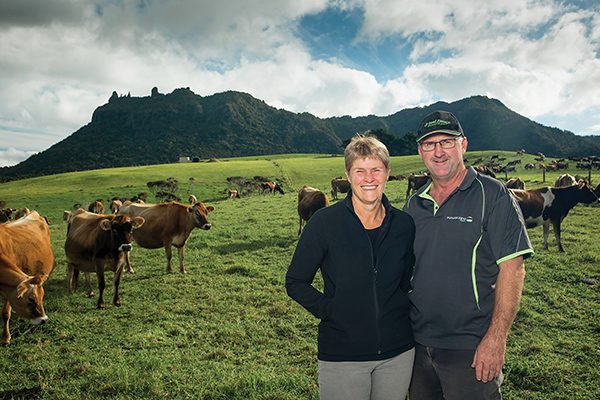 As more Northland farmers watch their ryegrass pastures wither under the increasingly hotter and drier summers and autumns, many are weighing up their options with alternative pastures.

After using alternative pastures for around 10 years, Murray Jagger has no doubts about their effectiveness.

Having watched their own ryegrass pastures struggle over 40 years, even after changes to various modern cultivars and their associated endophytes, he and wife Helen changed their game plan and moved to mixes using new cultivars of tall fescue and cocksfoot.

This alongside learning to live with, and get the most out of, that bane of northland pasture – kikuyu.

It probably helps that Murray’s family have farmed the same area for 150 years and have a long-term understanding of the seasonal cycles of the land.

The willingness to try new things may also be rooted in his family history. They were among a group who left the western highlands of Scotland in the early 1800’s for what is now Nova Scotia in Canada, and became boat builders.

A generation later many sailed on to New Zealand in the 1850’s, some in boats they had built.

While some families stayed with boat building, others became farmers.

Dry summers have always been an issue for ryegrass pasture in the north, Murray says, and the ubiquitous kikuyu wasn’t seen as a viable economic option back in the 1980’s.

This saw Murray and Helen start to experiment with alternatives 35 years ago in the shape of a triple mix of cocksfoot, fescue and white clover.

It wasn’t a popular mix with many farmers, with management changes needed. The resulting dissatisfaction still remains a hindrance to many farmers trying newer versions of these alternative species, Murray says.

But issues with ryegrass in the dry heat continued, as they did for many more other northern farmers.

Lack of persistence saw shallow-rooted perennial ryegrass only lasting three to four years before kikuyu became dominant again. There was constant reseeding as the ryegrass struggled and died. On top of that was the cracked soil in the summer and autumn which became home to pest crickets and which was prone to washing away, including into the waterways, after rain.

However, the couple also persisted in trying alternative pastures and around 10 years ago found success with new modern tall fescues and cocksfoot.

“A noticeable advantage we are observing in our resilient pastures based on the deeper root systems and thicker roots and root mass is the preservation of soil structure. Where ryegrass swards allow the soil to open, dry out and crack creating large voids and soil movement, the cocksfoot and fescues swards do not open up unless the conditions are extreme.”

“This holding of the soil structure not only maintains moisture but reduces cricket infestation and soil degradation and movement. These are significant environmental benefits,” Murray says.

“These resilient pastures have the ability to generate three times the clover population compared with our traditional perennial ryegrass pastures.”

“This is primarily due to the less aggressive establishment of the pasture sward compared to our perennial ryegrass pasture mixes, allowing the clover population to establish at the same rate as the fescues and cocksfoot compared to the aggressive shading effect that takes place with the modern high yielding ryegrasses.”

This has a positive knock-on effect of fixing more nitrogen with the increased clover growth and a reduced need for manufactured nitrogen.

Murray manages the pasture in the same way as traditional ryegrass through the winter but says spring brings challenges that farmers looking at converting need to be aware of.

“There needs to be a greater observance on growth rates and leaf maturity stage. The cocksfoot and fescues grow faster in the spring and you need to be ahead of that as you can lose quality and palatability.”

The optimal leaf grazing stage is about four to five leaves as opposed to ryegrass at two to three.

“These resilient pastures have the ability to generate three times the clover population compared with our traditional perennial ryegrass pastures.”

The modern grasses are highly palatable but quickly lose that if they are allowed to get out of hand, he says. This means unlearning set round length and managing by observation.

With this in mind he suggests any trial blocks for someone wanting to try out the new mixes should be close to where there is a lot of activity so they are easily observed rather than scattered about the farm.

This is good advice says Stuart Thomson, who along with partner Rose Philpott has converted around half of their 50:50 sharemilking farm at Kaipara Flats, near Warkworth to alternative pastures.

“Start with a paddock you’re going to drive past each day so you can see what it’s doing. If you have one down the back of the farm, chances are you’ll forget about it and it’ll get out of control.”

Originally from Mangakino, near Taupo, Stuart had previous experience with fescue.

Over the past five years Stuart and Rose have converted the hill slopes of the farm to fescue, cocksfoot and white clover mix pastures.

They were looking for persistence.

“The ryegrass just dies off after a long dry summer.” Stuart says.

Like Murray, experience has shown him there are some big changes needed to management.

“You need a whole change of mindset around grazing it. You can’t stick to the old set rounds. If it needs grazing, you graze it.” he says.

“Also, don’t shut up the best-looking pasture – which will be the fescue and cocksfoot – for silage. If you’ve got too much feed, shut up your ryegrass for silage.”

“It’s easy to be caught out by the speed of the growth which sees about a 15 day round compared to about 20 for ryegrass.”

Wet springs can increase growth rates further and this has seen him end up topping some paddocks or parts of paddocks that are more fertile.

“In summer the round lengthens to 25 to 30 days which is also fairly normal for ryegrass.”

But he also advises care in winter.

“You don’t want to let it get too long as the palatability drops off.

The cocksfoot grows particularly well in autumn and this sees some farmers opting to put more in their mix or drop the fescue and go solely with the cocksfoot and clover, he says. At Whangarei Heads, Murray has separated the two and uses 20kg/ha for cocksfoot with red and white clover, and 30kg/ha for fescue and red and white clover. Newcomers need to be aware they are slower to establish so ensure the seed bed is good and don’t drill too deep, he says.

While grazing pressure needs to be maintained to avoid the plants going to seed, he also cautions on overgrazing in summer and autumn even though the pasture will be in better condition than ryegrass paddocks. Murray and Helen’s proven success recently saw Murray as a guest speaker at the Resilient Pastures Symposium. Organised by the NZ Grasslands Association, the symposium saw farmers and researchers share their latest findings. Concerns around climate change were a common theme said organising committee chair and principal scientist at DairyNZ, David Chapman.

“For farming everywhere south of Auckland, look at what people are doing in Northland. That’s what much of the North Island will be like in the future, so that’s where the answers lie.”